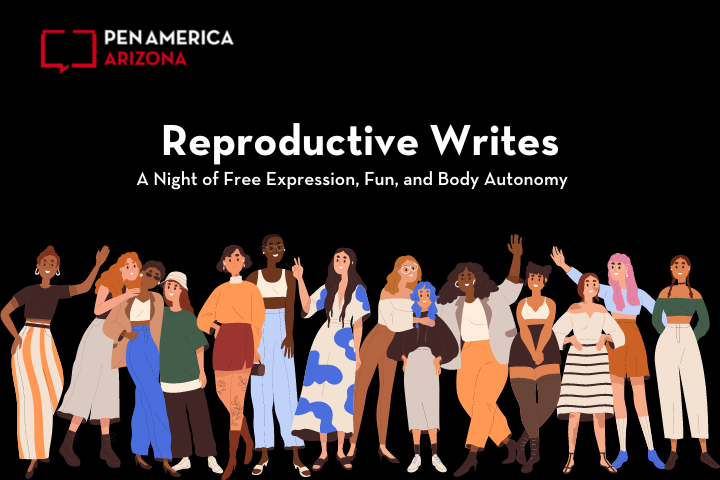 Since the Dobbs decision, Arizona has become one of several states that have outlawed abortion after 15 weeks. When certain well-established rights are treated as dispensable, all other rights – including freedom of speech – become less secure.

Reproductive Writes will provide a platform for prominent community advocates to speak to the importance of reproductive justice and literary expression. William Johnson, the director of the PEN Across America initiative, will give a brief overview of PEN America, and how women, queer, trans, and intersex voices are being silenced through censorship.

Join us as we discuss the current anti-choice climate and offer readings from pro-choice literary texts.

Arizona State Representative Judy Schwiebert is a staunch supporter of women and the freedom of reproductive choice. As a long-time teacher, librarian, and co-founder of the non-profit Theatre Works for youth, Rep. Schwiebert will use her vast experience with young people to discuss how anti-choice politics affect teens and their voices.

Meredith Blevins is a best-selling author of books for MacMillan, TOR/Forge, and Rodale Press. Her works include The Hummingbird Wizard, The Vanished Priestess, and The Red Hot Empress, among many others. Meredith’s stories are populated by women supporting each other and building new lives. She’s worked as a creative arts therapist in Quaker facilities and is an award-winning travel writer.

Attorney Dianne Post is a spokesperson for an ongoing lawsuit the National Organization for Women’s AZ chapter has filed in favor of abortion rights in Arizona. She’s also the author of two feminist novels. For over 30 years, Ms. Post has fought for legal reform in 14 countries to protect women and children from domestic violence, sex trafficking, prostitution, and pornography. Ms. Post has consulted in cases on behalf of women in the European Court of Human Rights, the United Nations, and the Inter-American Commission on Human Rights.

Deborah Ledford is the author of the Inola Walela/Steven Hawk police procedural series, including Causing Chaos, Crescendo, and Staccato, and was a finalist for the Hillerman Sky Award and the New Mexico-Arizona Book Awards. Her award-winning stories appear in numerous print publications and anthologies. Before her career as a writer, she worked for a decade as a professional scenic artist on motion pictures, industrial films, national commercials, and live theatre. Deborah Ledford is also an Arizona State University adjunct professor for The Virginia G. Piper Center for Creative Writing.

Michelle Beaver is the leader of PEN America’s Arizona Chapter. She is an author, editor, journalist, and dedicated social-justice volunteer. She’s written two health books for Reader’s Digest and John Wiley & Sons. A book she self-published helped bridge the gap between gay Mormons and their church and was the focus of a National Public Radio program. Michelle has edited fiction and nonfiction books and served as the judge of Fiction 500, a national short-story competition. Her forthcoming novel, Cypher Crew, is about five misfits who unite through hip-hop street dance to save Arizona’s oldest high school from getting shut down by greed.

Taté Walker is a Lakota citizen of the Cheyenne River Sioux Tribe of South Dakota. They are an award-winning Two-Spirit storyteller for outlets like The Nation, Everyday Feminism, Native Peoples, Indian Country Today, Apartment Therapy, and ANMLY. They are also featured in several anthologies, including FIERCE: Essays by and about Dauntless Women, South Dakota in Poems, and W.W. Norton’s Everyone’s an Author. Taté recently released their first full-length, illustrated poetry book, The Trickster Riots (Abalone Mountain Press, 2022). Learn more at jtatewalker.com.