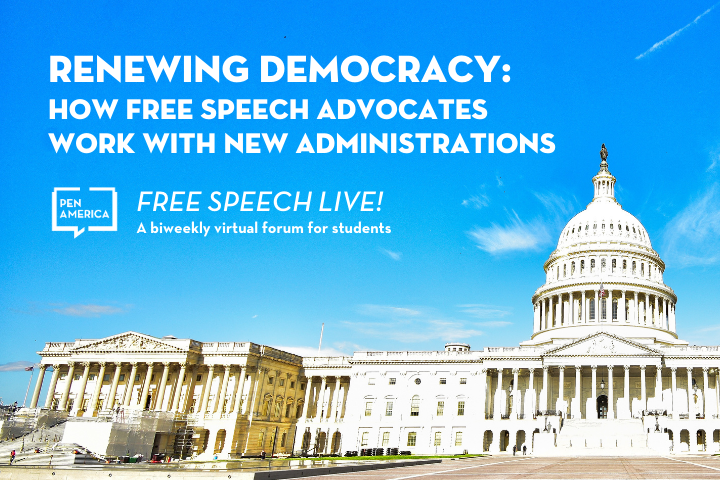 After four years of the Trump administration’s tumultuous relationship with free expression, the inauguration of the Biden-Harris administration on January 20 represents an opportunity for a new beginning. With the Biden administration now responsible for restoring faith in our democratic institutions, PEN America has called on the White House to utilize its first 100 days to foster healthier civic debate, elevate respect for facts and the truth, restore the country’s reputation for human rights, and strengthen the speech rights of millions around the world. But during this time of political renewal, how does the advocacy ecosystem in the United States influence government policy? How can free speech advocates interact with a new presidency?

Matt Bailey serves as PEN America’s digital freedom program director, focusing on issues ranging from surveillance and disinformation, to digital inclusion that affect journalists and writers around the world. Bailey previously served as a senior advisor for the National Democratic Institute. Before that, he was a civil servant in the Office of the United States Chief Information Officer under two presidents. While at the White House, Bailey was part of the teams that launched the first-ever U.S. government-wide open source and legislative data initiatives, led its participation in the Open Government Partnership, and led the chief information officer’s policy team. Previously, Bailey served the city of Washington, D.C., as its first director of technology innovation, launching initiatives to increase civic engagement, adoption of modern software practices, and human-centered design. He was an early employee at the U.S. Consumer Financial Protection Bureau, where he worked to bridge the agency’s open data and service design strategies. He has also served as a cybersecurity engineer and analyst, a software developer, and was a founder of Code for DC, an affiliate of Code for America. Bailey holds a MA in English literature from Georgetown University.