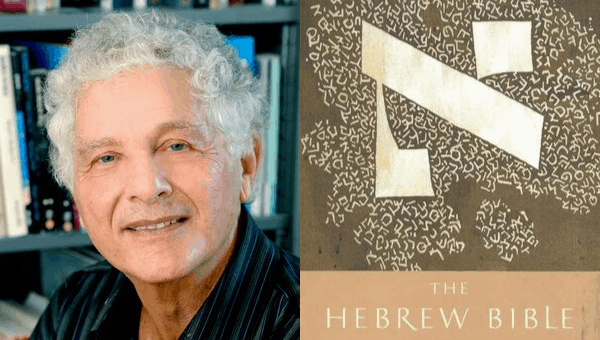 PEN West will feature Robert Alter in an afternoon reading of his award-winning translation with commentary of The Hebrew Bible (3 volumes) published by W.W. Norton (2018) on October 19 from 3-5pm. Critics have called this translation a “landmark work” and “masterpiece of deep learning and sensibility,” which is “at once eloquent and accurate.”

Robert Alter is Professor in the Graduate School and Emeritus Professor of Hebrew and Comparative Literature at the University of California at Berkeley, where he has taught since 1967. He is a member of the American Academy of Arts and Sciences, the American Philosophical Society, the Council of Scholars of the Library of Congress, and is past president of the Association of Literary Scholars and Critics. He has twice been a Guggenheim Fellow, has been a Senior Fellow of the National Endowment for the Humanities, a fellow at the Institute for Advanced Studies in Jerusalem, and Old Dominion Fellow at Princeton University. He has written widely on the European novel from the 18th century to the present, on contemporary American fiction, and on modern Hebrew literature. He has also written extensively on literary aspects of the Bible. His 26 published books include two prize-winning volumes on biblical narrative and poetry and award-winning translations of Genesis and of the Five Books of Moses. He has devoted book-length studies to Fielding, Stendhal, and the self-reflexive tradition in the novel. Books by him have been translated into 10 different languages. Among his publications over the past 25 years are Necessary Angels: Tradition and Modernity in Kafka, Benjamin, and Scholem (1991), The David Story: A Translation with Commentary of 1 and 2 Samuel (1999), Canon and Creativity: Modern Writing and the Authority of Scripture (2000), The Five Book of Moses: A Translation with Commentary (2004), Imagined Cites (2005), The Book of Psalms: A Translation with Commentary (2007), Pen of Iron: American Prose and the King James Bible (2010), The Wisdom Books: A Translation with Commentary (2010), and Ancient Israel: The Former Prophets. His completed translation of the Hebrew Bible with a commentary was published in 2018 in a three-volume set. In 2009, he received the Robert Kirsch Award from the Los Angeles Times for lifetime contribution to American letters and in 2013 the Charles Homer Haskins Prize for career achievement from the American Council of Learned Societies. In 2019, the American Academy of Arts and Letters conferred on him an award for literature.