When Should Journalists Become Activists 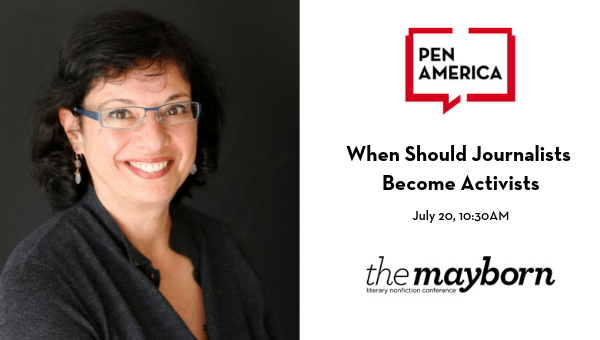 Award-winning journalist and author, Sonia Nazario has tackled some of this country’s most intractable problems—hunger, drug addiction, immigration—while winning some of the most prestigious journalism and book awards, including two Pulitzer Prizes. In partnership with the Mayborn Literary Nonfiction Conference, join us in this session as she shares an insightful analysis of covering the nation’s current immigration crisis and the precarious role journalism plays in telling this story.

This event is open to all Mayborn Literary Nonfiction Conference attendees. To check out the full schedule, please click here.

Sonia Nazario is an award-winning journalist whose stories have tackled some of this country’s most intractable problems—hunger, drug addiction, immigration—and have won some of the most prestigious journalism and book awards, including two Pulitzer Prizes. She was also a finalist for a third Pulitzer, in Public Service. She is best known for “Enrique’s Journey,” her story of a Honduran boy’s struggle to find his mother in the U.S. Published as a series in the Los Angeles Times, “Enrique’s Journey” won the Pulitzer Prize for feature writing in 2003. It was turned into a book by Random House and became a national bestseller.

Her recent humanitarian efforts to get lawyers for unaccompanied migrant children led to her selection as the 2015 Don and Arvonne Fraser Human Rights Award recipient by the Advocates for Human Rights. She also was named a 2015 Champion of Children by First Focus and a 2015 Golden Door award winner by HIAS Pennsylvania. In 2016, the American Immigration Council gave her the American Heritage Award. Also in 2016, the Houston Peace & Justice Center honored her with their National Peacemaker Award.