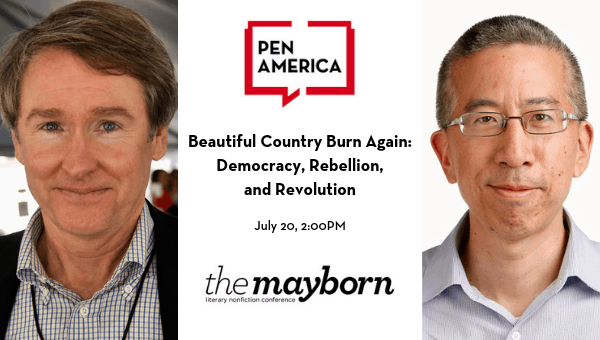 Author Ben Fountain’s book Beautiful Country Burn Again: Democracy, Rebellion, and Revolution is a gripping story that explores the 2016 presidential election and how what happened is a harsh reflection of America’s troubled history steeped in political divisiveness. In partnership with ABOTA (America Board of Trial Advocates), join us for a conversation led by Tom Huang, Assistant Managing Editor for Journalism Initiatives at The Dallas Morning News, to discuss how Fountain’s timely book fused history and the present day to paint a startling portrait of the state of our nation.

This event is open to all Mayborn Literary Nonfiction Conference attendees. To check out the full schedule, please click here.

Ben Fountain was born in Chapel Hill and grew up in the tobacco country of eastern North Carolina. A former practicing attorney, he is the author of Brief Encounters with Che Guevara, which won the PEN/Hemingway Award and the Barnes & Noble Discover Award for Fiction, and the novel Billy Lynn’s Long Halftime Walk, winner of the National Book Critics’ Circle Award and a finalist for the National Book Award. Billy Lynn was adapted into a feature film directed by three-time Oscar winner Ang Lee, and his work has been translated into over twenty languages. His series of essays published in The Guardian on the 2016 U.S. presidential election was subsequently nominated by the editors of The Guardian for the Pulitzer Prize in Commentary.

When Should Journalists Become Activists