[VIRTUAL] Disinformation vs. Democracy: Soros and the Fight for Open Societies 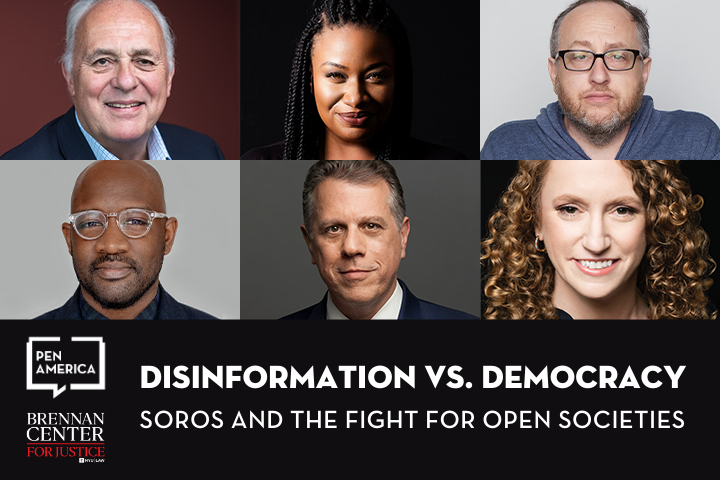 For decades, philanthropist George Soros has been dogged by conspiracy theories and disinformation. A new documentary from filmmaker Jesse Dylan shows how his opponents—from Glenn Beck to the Proud Boys—have leveraged racist, anti-Semitic tropes to smear not just Soros but those who’ve benefitted from his support for open societies globally. Now, with disinformation posing a direct threat to democracy, stemming the tide of lies has never been more crucial. Join the Brennan Center for Justice and PEN America for a conversation about truth, lies, and how to support open societies at a fractured historical moment. In advance of the conversation, participants will have a chance to watch for free the film Soros.

Register in advance for the event. After registering, you will receive a confirmation email containing information about attending the event. A question period will be open to the audience after the panelists’ discussion.

Michael Waldman is president of the Brennan Center for Justice at NYU School of Law. A nonpartisan law and policy institute that focuses on improving systems of democracy and justice, the Brennan Center is a leading national voice on voting rights, money in politics, criminal justice reform, and constitutional law. Waldman, a constitutional lawyer and writer who is an expert on the presidency and American democracy, has led the Center since 2005. Waldman was director of speechwriting for President Bill Clinton from 1995 to 1999, serving as assistant to the president. He was responsible for writing or editing nearly 2,000 speeches, including four State of the Union and two inaugural addresses. He was special assistant to the president for policy coordination from 1993 to 1995. He is the author of The Fight to Vote (Simon & Schuster, 2016), a history of the struggle to win voting rights for all citizens.

Mark Malloch-Brown is president of the Open Society Foundations, the world’s largest private funder of independent groups working for justice, democratic governance, and human rights. He has served on Open Society’s global board since 2009. In his career of service, Malloch-Brown has worked to advance human rights, justice, and development in a variety of roles: serving as deputy secretary general of the United Nations under Kofi Annan; heading the United Nations Development Programme; directing external affairs at the World Bank; and working as a British government minister. He also co-founded Crisis Group, an NGO focused on preventing and averting violent conflict. More recently, he chaired Best for Britain, a group that makes the case for Britain’s engagement with the European Union. He has worked with a range of private companies, as well as leading the boards of the Royal Africa Society, the UN Foundation, and the Business Commission for Sustainable Development.

Andre Banks is founder and CEO of A/B Partners. With over 20 years of political communications and agency experience, Banks brings best-in-class creative strategies and deep expertise in social movements to move critical voices from the margins to the mainstream. Prior to founding A/B in 2018, Banks was executive vice president for social impact and philanthropy at BerlinRosen, a leading national public relations and strategic communications firm. At BerlinRosen, Banks led communications strategy, staff management, and business development for the 20-person practice area. Banks’s portfolio included philanthropy, criminal justice reform, international human rights, LGBTQ rights, voting and civil rights, sustainability, and media and culture. Before joining BerlinRosen, Banks was founding partner at Purpose and the cofounder and former director of All Out, a global campaigning organization with more than 2.2 million members leading the global push toward LGBT equality. He currently serves as the chair of the board at Color Of Change, and as a staff member leading the organization in its early years.

Arisha Michelle Hatch is the vice president and chief of campaigns at Color Of Change, leading campaigns on civic engagement, voting rights, criminal justice, and corporate and media accountability. Hatch is a leader and innovator in the racial justice movement, organizing Black People’s Brunches that brought together more than 12,500 people in 2018 and helping to set the organization’s agenda in 2019 and beyond. Since joining Color Of Change in 2012, she has ushered in some groundbreaking victories for Black communities: getting payment processors like Mastercard and PayPal to ban use of their platforms by white supremacists and persuading Saturday Night Live to add two Black women to its cast and writer’s room mid-season. Before coming to Color Of Change, Hatch worked as a lawyer and organizer for Barack Obama’s presidential campaign in 2008. She later served as national organizing director of the Courage Campaign, which lays the groundwork for progressive change in California.

Jesse Dylan is a prolific director, immersive storyteller, and visionary problem-solver, striving to be in service of ideas that change the world both inside and outside of his creative agency Wondros. Vibrant in his passions and dedicated to creating thoughtful, engaging content, he is the energy behind his projects’ mission to break barriers and generate large-scale impact. As the mind behind some of the most successful campaigns in commercial television, print and interactive advertising, Dylan has dedicated his career to telling the stories of some of the world’s most innovative individuals and organizations.