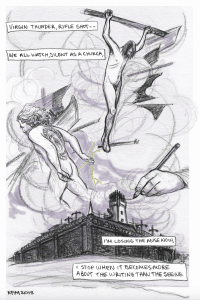 An illustrated excerpt of “The Storm” by Edward Ji. Artist: Rachel Masilamani

Edward Ji, a poet and writer who has received honorable mentions in the PEN America Prison Writing Contest for his pieces “The Storm” (2018) and “My Co-Worker” (2019), shares a heartbreaking account of being transferred to adult prison at age 17.

After reading the piece below, you might also be interested in checking out this brief and affecting interview conducted with Edward by PEN America Prison Writing Committee Member Eleanor Mammen last fall.

I am prepared to die. My name is Edward Mike Ji, now age seventeen. I am a newly minted adult duly dubbed and declared so by Collin County Juvenile Court, inmate number 207989, and death cannot come swiftly enough. I lay in this foul cell, lay in vegetative rot, a spiritual-mental-physical malaise. The whitewashed walls are a creeping yellow, as if they had absorbed the essence of those who had rotted here before. The stone floor is cracked as if by some titan’s violence, and liable to gnaw at your toenails. The hot fluorescent lights above, seen even through the thin pillowcase wrapped around my head, seem to be intent on slowly cooking me insane.

I wake to the silence of the tomb, blissful and cursed both at once, for the lunatics are still hibernating in bear-like bundles. Whatever hour of the morning it is leaving me alone in this inescapable space with my thoughts and soured memories and dreams, more awake than living and nightmares I can feel. Yes, I am alive. But rather meagerly so. I cannot tell the hour or the day or the month. My lawyer feeds me a letter every few months or so, and I am shocked by the date on the creamy letterhead, at how much time has escaped me. Only the seasons can reach me; I experience twenty minutes of weather a day.

Two cages away, the Korean has hung himself with a TV wire. “Pale as a sheet.” It’s a cliché, I know. But I will not lie. They wheeled him by my hobbit hole on a bright orange gurney, jumping up and down on his chest and he was as drained as a ghost without a drop of blood. They have since drilled our TVs out and cemented them back in two feet higher. With shorter wires.

The intercom announces my “hour out,” a square piece of steel screwed flush with the cinder block perforated with holes half of them permanently jammed with toilet paper. Shut up, some ancestor of mine said. For the love of God, shut up.

One hour a day out of my cell. Twenty-three in. 1,380 minutes. 82,800 seconds. Some of my neighbors have stopped coming out, stopped visiting. They want to be left alone while they quietly wear away. My theory is that there are only two types of insanity, forget what the state psyches say: quiet, polite, insane or obnoxious, profanity-shrieking, bodily-fluid-slinging, 3-A.M.-head-banging insane. I’m grateful to the ones who hold it in. I really am.

I consent to come out. The intercom curses my canine bloodline in a redneck cowboy drawl. I stand in the little chicken wire window of  my bank vault door and mime obscene gestures. The guard in the glass cube fires back in kind, with the unfair advantage of a 7Up bottle as a prop. That’s Hutch. He’s cool. He and his partner Gil, who occasionally takes me under the camera to demonstrate hold-breaks.

I’m going to prison. My trial is still months or years off, but we all know it without a word wasted on talking about it. I’m one of the quiet ones.

Gil spends five minutes chaining my hands, then my waist, then my ankles, then my hands loop-the-loop to my waist, all the while grousing about child support and the Evil One bleeding him dry. I tell him he ought to be more careful, avoid these situations in the first place, to exercise self-control. We laugh. Then he starts going off about his last jujitsu tournament and waxes poetic while replaying how he roundhoused some Cambodian’s nose in.

Qiu is waiting for me in the “dayroom.” A single table, two square feet, bolted to a pair of stools, the whole thing bolted to the floor. We’re the only two here, not that they could fit any more. First things first: the chessboard already set up, Qiu grinning hungrily over the plastic pawns. I trounce him quickly, and then point to the pen and paper.

“One more,” he begs in Mandarin. “I know what I did wrong this time. One more chance.”

I get up, clanking awkwardly to the writing pad. He hurriedly sets it on the table.

“First, review from yesterday: Gan-ryi is jail or prison—”

“Yes, good. Mei-guo is America, or the United States.”

Qiu is waiting for two life sentences. For what, I won’t say. He told me he was innocent. I believe him. Let’s just leave it at that.

Qiu is forty-six years old. I did the math for him. He’ll be seventy-six before he surfaces for his first parole. If they run the sentences together. What if they don’t run together, he asked? I said I didn’t know. He smiled at me nervously.

When Hutch calls us back in, Qiu waves goodbye and when I get back to my cell, I see the credits rolling on the Ellen DeGeners show and realize Hutch gave us seventy-five minutes.

“I’m going to die.” I say to the immovable cinder blocks. I’ll be Qiu’s age before I see light again. If they stack him, Qiu will be 106.

When I wake up the following day, it seems very important that I should know the date, as if I had dreamt about it only to have it obliterated by the xenon gas tubes attacking my gummy eyes. Hutch isn’t here today. Some square-jawed Captain America is, so I get sent out alone and wander circles in the dayroom like a ghost in purgatory. Later, a smudged newspaper flies mysteriously into my cell. Smuggled to me by a friend. Thirty-two dead in Iraq. Economy in shambles. The date, as if by Providence. Qiu’s birthday is in two days.

I was sixteen in the John R. Roach Juvenile Center of Corrections when Mr. Steve escorted me down a dark hallway. I didn’t know where I was going. But apparently, there were no cameras, no witnesses.

He took me into an empty pod and locked the door. Twelve vacant cells encircled the walls, their eternal window lights like eyes in the dark. Twelve peas in a “pod.” I remembered the former inhabitants well: the Bowling Ball and the Scarecrow, the Harry Potter Rapist, the Evangelical Satanist, the Rich Russian who cheated at Monopoly, and the child-like hulk who turned into a freight train in the rec yard. A devil’s zodiac. But they were all gone. Only I was left.

And Mr. Steve knew it. “Come here,” he said, not ordered. Friendly. I couldn’t see his face. But he was standing under where the camera couldn’t turn.

“Come here.” I heard the smile in his voice. I approached him, as a dog approaches a man, the bits of metal on his uniform glinting in the gloom. Not that I had anywhere else to go.

“Here, take this.” I stared dumbly at the shiny bar of foil in his hand. Seven months of “rehabilitation” had already blunted my normal human reactions.

“Well? What’s the matter? Aren’t you going to eat it?” A Nestle Crunch bar. Milk chocolate with bits of embedded rice. I still remembered after all these years.

“Happy birthday,” said Mr. Steve in a tone that suggested a death in the family. I had turned seventeen. I was going to the big house.

Qiu’s birthday is in two days. I hit up commissary for all the things I need: four Rice Krispies, two Hersey’s Almonds, one trail mix with dried fruit, a pack of peanut-butter cookies, and an ounce of red juice mix. Red is lucky to Chinese, like green is for Irish.

First, I glue the Rice Krispies together with peanut butter: the closest things to traditional rice cakes. Second, I melt the chocolate in warm water and squeeze it out as icing. Before it sets, I lay the dry fruit—mango, banana, date—more for color than anything. A chocolate-rice-peanut-butter fruitcake. Go ahead and laugh. I dare you.

Finally, I lay out three Oreo-like cookies and carve Qiu’s three character Chinese name into the icing. I screw up twice and have to (literally) eat my words. My tiny table is covered in crumbs, my back like I’m dissecting a worm. I make a microscopic tear in the drink packet and painstakingly fill the cookie grooves with fine granules of Artificial Cherry-40. A few strategic droplets of water brings the color to life. Qiu Chang Qing as bright as Chinese New Year. I crown the cake with the three medallions and lovingly hide it in an oversized Ziploc bag. That, of course, is when Frizz comes through my door.

The Frizz. There are people like her in all societies. The neighbor who buys a decibel reader so she can tell you exactly how loud you are, who calls the homeowner’s association because your branches are six inches over the street. She measured. The species of teacher who taught you to hate school. Inmates use the term “police” (pronounced POHL-lease) for all guards and authority figures, but especially ones like her, who see every rule as an opportunity for Taliban-like power.

I try to explain the cake to Hutch. He nods silently. Doesn’t do anything. The compassionate always defer to the passionate true-believer. This is how ethnic-cleansing happens. If The Frizz had dragged me out of bed and shot me, he would’ve just kept nodding with those country-music eyes.

I’m balancing the stupid thing in my hands, trying to hold it together.

“Put it down.” commands The Frizz. “Put it down and put on your shoes and step out of the cell.”

What choice do I have? I try to explain to Hutch again, hoping she’ll hear and do what?

But when she is done destroying my house, the cake lays untouched on the little gray table.

Open Letter to the Egyptian Ministry of Justice

The PEN Pod: Diving Beneath the Waves with Carmen Boullosa

At least 20 Bangladeshi journalists have been charged or arrested under a controversial law in the past month. Rights activists have expressed grave concern over the rising number of cases being filed against journalists and critics of the government.
https://bit.ly/2LLXxHN

Pleased to report I am the recipient of a @PENamerica journalism grant! Thank you PEN America for your generosity and support! #journalism #WritingCommunity #Writers #PENAmerica

Tuesday, June 9th, ten of Elena Ferrante's international publishers will be meeting for a teatime chat—and you're invited!

Experience a multilingual, transnational celebration of translation and reading like no other. RSVP today!