Dispatches From Civitella Ranieri: All Along the Watchtower 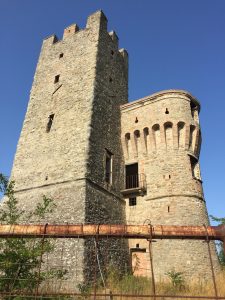 As part of a special collaboration between PEN America and the Civitella Ranieri Foundation in Umbria, Italy, every two years PEN America provides a unique, six-week residency to a working PEN America Member. A special panel of judges awarded the inaugural residency to poet Natalie Diaz. This year’s fellow is Sameer Pandya, author of The Blind Writer: Stories and a Novella, which was longlisted for the 2016 PEN Open Book Award.

Over the coming weeks, Pandya will post a series of dispatches from Civitella documenting his stay, his experiences, and the projects he is working on during his residency.

All Along the Watchtower

Six nights a week, we all gather to have an evening meal on an enormous marble table underneath a trellis. Until recently, the days have been quite warm, and so it has been nice to sit outside in the cool evening air. The food is local and fresh, and the wine goes down well.

And there have also been meals away, in Perugia and Urbino. Cod stuffed with tomatoes and olives; hard cheese dribbled with fresh honey; endless varieties of cured meats. I have been getting pistachio gelato wherever we go, which I think is surely a sign of middle age.

But these meals, ultimately, have led to something more: great conversations at the dinner table and away from it.

For this session, there are composers, writers, and visual artists from Turkey, Lebanon, Kenya, Australia, Syria, Italy, the UK, and the United States.  I hear the sounds of a cello and a piano coming from other studios and see sketches on a pad and ideas attached to corkboards. For my untrained ear and eye, it all sounds and looks fully baked.  But for those composing the music, it obviously is not.  But listening to it, and listening to the visual artists describe their processes, has shown me that while we may be after some similar things, we get to them in some pretty remarkably different ways. Watching the others work has been one of the highlights of my time here. Art and its practice. Same and different.

I have taken a few long walks with a Kenyan visual artist. We like a particular loop that takes us on a country road that cuts through olive groves; up onto the top of a hill that has a very old, abandoned watchtower; past a cemetery; and along woods that have wild boars and pheasants running through them.  And on this walk, I notice the things he stops and notices, and we talk and talk about what it means to produce “African” and “Kenyan” and “ethnic” art now, about colonialism and its legacies, about the actual and symbolic nature of dirt.

The lessons I have learned from him and the others here, who are coming from sometimes very different places than me, have been important, crucial reminders.  Underneath and alongside the stories we tell in our various mediums are ideas that may overlap with strongly held beliefs and ideas—or ideas that may drastically challenge them.  (The books that I have returned to over and over again—Ellison’s Invisible Man prominently among them—forcefully make the challenge.)  In this, art becomes a political practice.  But what art, practice, and politics means—the explicitness, the implicitness—differs significantly from place to place, circumstance to circumstance, country to country.  Same and different.

The meals underneath the trellis have been vital in reminding me of this, infusing the return to my desk the next morning with a great bit of excitement, vigor, and purpose.