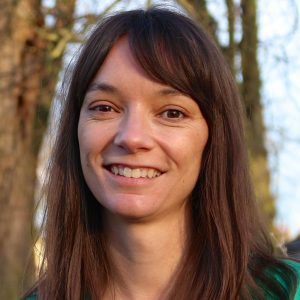 On August 22, Catapult will publish PEN America Best Debut Short Stories 2017, the inaugural edition of an anthology celebrating outstanding new fiction writers published by literary magazines around the world. In the weeks leading up to publication, we’ll feature a Q&A with the contributors, whose stories were selected for the anthology by judges Marie-Helene Bertino, Kelly Link, and Nina McConigley, and awarded PEN’s Robert J. Dau Short Story Prize for Emerging Writers. Submissions for the 2018 awards are open now.

Amber Caron’s work has appeared or is forthcoming in Southwest Review, Kenyon Review Online, The Greensboro Review, and Agni. She has an MFA from the Bennington Writing Seminars, where she was awarded the 2016 fiction prize. She is the recipient of the McGinnis-Ritchie Award for fiction from the Southwest Review and a grant from the Elizabeth George Foundation.

“The Handler” follows Leslie, who leaves her boyfriend, Dennis, to move to the woods of New Hampshire and help a man, his daughter, and fifty-seven dogs train for the Iditarod.

Siberians, Alaskan malamutes, Akitas, Russian wolf-hounds, salukis, Saint Bernards, and mongrels—greyhounds mixed with Newfoundlands and a dash of Belgian shepherd; Labradors mixed with coonhounds. Their names had been painted on the green wooden boxes they slept in: Mars, Frost, McGee, Bandit, Minnow, Tip, Empire, Stewpot, Pluto. Back of the property was the Scooby-Doo litter: Velma, Scooby, Shaggy, Daphne. Next to them, the pianists: Billy Joel, Elton John. 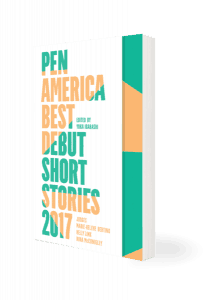 “That there is Ray Charles,” Brent said, pointing to the glassy-eyed dog at the end of the line. “Was named Ray Charles before he went blind.”

Leslie bent over to take the dog’s muzzle in her hands. His nose twitched. He lifted a paw.

“Well, maybe you should start naming them after billionaires,” Leslie said.

“I like it. A sense of humor. That will help you here.” He bent down, held Billy Joel’s nose to his. “What’s that, Billy? How’d this lady get here? Well, you’ll just have to ask her.”

Brent stared up at Leslie. “Well, answer the dog,” he whispered. “Ruff.”

“Billy Joel, are you going to accept that answer?”

The dog rolled over onto his back.

The truth was that the night before she boarded the bus for New Hampshire, she left her boyfriend, Dennis, a voicemail: I’m leaving you. This time for the woods and fifty-seven dogs. It sounded funnier when she’d rehearsed it in her head. She waited all night for him to call back and talk her out of it.

Catapult Books: First things first: Have you ever driven a dog sled?

Where did you get the idea for this story?

It’s hard to pinpoint where exactly a story comes from. I’ve heard this from many writers, and it’s usually true for me. But I actually know where this story originated. At a writing conference in 2013 I happened to meet separately a recreational musher and a professional dog handler. My conversations with these two women kicked off an obsession with dog-sledding. I was fascinated by the physical nature of the work, the isolation of musher life, and the loneliness that often accompanies it. After the conference, I read everything from training manuals to magazine features, watched videos of races, visited a rescue kennel that houses sled dogs too old to race. I knew this was a world I wanted to write about, but I wasn’t sure what shape it would take, and it was a long time before I put pen to paper.

Behind the wild situation that Leslie’s placed in, we also get glimpses of the “before”: a relationship that crumbled under the weight of an abortion. Can you talk about how you wove those two stories together?

Leslie moves to the middle of nowhere in the dead of winter to care for a bunch of dogs, so I knew that whatever she was running from must be big. For a long time I had no idea what it was. I thought it probably had something to do with Dennis, but knew it had to be more than a rocky relationship. Then one day I wrote, “Leslie did the math. Her own child would have been one [year old].” That’s when I figured her exile had something to do with an abortion, a fact I resisted for a long time. I deleted those lines and wrote many drafts that had nothing to do with an abortion, mostly because I was worried this weighty topic would become the focal point of the story. I wrestled with those drafts for a long time, but in the end, it became clear that Leslie’s relationship with Jill was forcing her to reckon with the child she didn’t have. Once I accepted this fact, I went back to the beginning, put those lines back in, and things more or less fell into place. There’s a lesson here, I’m sure, about the futility of trying to exert too much control over a story . . .

The encounter with the moose is shockingly violent. Why was it important to include?

Much of my fiction is set in the wilderness, and I’m constantly surprised by how violent the natural world can be. Portraying this violence raises serious challenges, and it’s something I think about a lot. In his essay “There Will Be Blood,” Benjamin Percy describes how gratuitous violence takes readers out of the narrative, drawing attention instead to the author. Some authors, he writes,

linger on the violence, wallow in the gore, celebrate it to such a degree that I can almost see them smirking, hear them snickering, and they essentially become that kid we all went to middle school with—Cody: big ears, buzz cut, braces—who would fake a punch, and then, when you startled, would screech, “Two for flinching,” and sock you twice in the shoulder. Don’t be a Cody. Nobody liked him. (Thrill Me, 57)

Here is my barometer: I try not to be a Cody. I try not to linger. And I always ask whether violence needs to be included. The moose scene in this story seemed important for two reasons. First, moose are a musher’s worst nightmare. They attack dogs because they mistake them for wolves, and many mushers carry a gun for protection. Leslie and Jill don’t—they’re each in their own way too naïve to consider such a move—and this scene shows the consequence of their inexperience. Second, and more importantly, this is the moment in the narrative when everything changes for the characters, and I think we have to see it if we’re to understand the relationship that emerges between Leslie and Jill.

How long did it take you to write the story?

From research to publication, three years.

How has the Robert J. Dau prize affected you?

I can’t stress enough how exciting it was to have my story published in Southwest Review. I hung the acceptance letter on my refrigerator. It’s still there. So when I found out the story was selected for the Robert J. Dau Prize, it nearly sent me over the edge. To receive recognition like this—especially early in a career and in a year of unprecedented threats to organizations like the NEA and the NEH—feels ridiculously lucky. Enormous thanks to Southwest Review, PEN, and the Dau family for their support and encouragement.

What are you working on now?

A collection of short stories and a novel.

Finally, where do you discover new writing?

Oh, I love this question. There are so many places, but my favorite is still by word of mouth. I’m constantly asking friends (and sometimes strangers) what they’re reading, and I keep a list. Also, I’ve been listening to a podcast called “Between the Covers” (KBOO radio, Portland). The host, David Naimon, has great guests—many of them completely new to me—and he’s a wonderfully generous interviewer. I can’t recommend it enough!