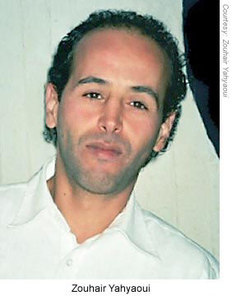 The Freedom to Write Committee mourns the passing of Zouhair Yahyaoui. According to his family, he died of a heart attack on Sunday, March 13, 2005. He was arrested in June 2000 and sentenced to over two years in prison for “propagation of false news,” “theft from an employer,” and unauthorized use of the internet. He was released in November 2003 after qualifying for conditional release, having served more than half his sentence.

Zouhair Yahyaoui (pen name “Ettounsi”, “the Tunisian”) was a graduate in economic sciences and an internet journalist. In July 2001 he founded the internet site TUNeZINE.com shortly after his graduation from college, to disseminate information concerning the struggle for democracy in Tunisia and to publish opposition material.

What began as a one-man operation expanded to a nucleus of five people. The e-magazine ran scathing reports of human rights violations in Tunisia, critiques of the fifteen-year-long regime of President Zine al-Abidine Ben Ali, challenges to the tourism industry and discussion boards for visitors. TUNeZINE rapidly became one of the most popular virtual spaces in Tunisia, and Yahyaoui became famous in July of 2001 when he was the first to diffuse over his website an open letter that his uncle, Judge Mokhtar Yahyaoui, had addressed to President Ben Ali denouncing the total lack of independence accorded to the judiciary in Tunisia. One of his friends has been quoted as saying of him: “he has chosen his own way in life and does not hide himself away. He talks big, both at home and in public. He talks loudly sometimes, and allows himself to say what others only think… He is a national treasure, and a force for international understanding.”

Yahyaoui was the subject of government censorship after the founding of TUNeZINE. This constant threat forced him to be creative in maintaining public access to the website. For example, government attempts to block site access in Tunisia were circumvented by providing proxy websites each week.

On June 4, 2000, not long after his magazine invited readers to vote on whether Tunisia was a “republic, a kingdom, a zoo or a prison,” Yahyaoui was arrested at a Tunis cybercafé by six plainclothes police officers who did not have an arrest warrant. Upon his arrest, he was not informed of the charges levied against him and was prohibited from speaking with any of the 20 lawyers that stepped forward to represent him in court. His lawyers were also not allowed access to his file in preparation for the trial. The police officers who arrested him accompanied him home, searched it without a warrant, and confiscated his personal computer files before taking him into custody.

His whereabouts were unknown for the five following days. During this time, he reported that he was subjected to three sessions of “suspension,” a method of torture whereby the victim is suspended by his arms with his feet barely touching the ground. After the third session, he revealed his website’s access code, allowing the Tunisian authorities to remove tunezine.com from the Internet.

Yahyaoui was initially charged with “publishing information known to be untrue” under article 309 of the Tunisian Penal Code. He was later sentenced to one year for “propagation of false news,” and a further year and four months for non-authorized usage of an Internet connection” and “theft from an employer.” Yahyaoui did not attend this hearing, declaring that he “did not trust a justice that followed orders [from above].”

Yahyaoui was re-tried on July 3, 2002. On July 10, his sentence was reduced on appeal from twenty-eight months to two years.

It is reported that in September 2002, Yahyaoui began suffering from acute kidney problems. When he refused to take an undisclosed medicine to ease his kidney pains, two guards reportedly assaulted him, injuring his back. He was eventually admitted to hospital on September 13, 2002 for a brief period. Yahyaoui’s cell was infested with cockroaches and he suffered from scabies as a direct result of squalid living conditions and infrequent access to water. Yahyaoui went on several hunger strikes to protest these intolerable detention conditions.

TUNeZINE has been reinstated by his colleague and fiancée, Sophie Elwarda. Family members were only permitted one visit a week, and any nutritious food they brought with them was confiscated.

Zouhair Yahyaoui was also an Honorary Member of the English PEN Center. He was one of the 2003 recipients of the PEN/Barbara Goldsmith Freedom to Write Award.