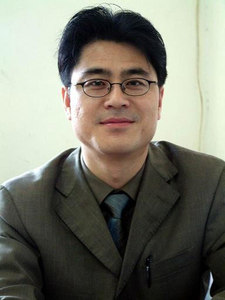 Shi Tao was released from prison on August 23, 2013–15 months before his sentence was due to expire. He has extended his thanks to all PEN colleagues who supported him during his long detention.

Age 45, Shi Tao is a journalist and poet who wrote for daily Chinese publication Dangdai ShangBao (Contemporary Business News) based in Changsha. Shi also contributed to other newspapers and was active on the Internet; he submitted articles and supplied occasional political commentary to overseas Chinese web sites such as the dissident MinZhu LunTan (Democracy Forum). His essays often call for political reform in government. He has also written several books of poetry.

Shi Tao was employed at Dangdai ShangBao (Contemporary Business News) from February to April 2004, during which there was a staff meeting held to discuss the approaching 15th anniversary of the June 4 Tiananmen Square massacre. This meeting focused on a memo issued by China’s Central Propaganda Department giving instructions on information gathering and media coverage of the anniversary. Shi forwarded his notes taken at the meeting via e-mail to independent Chinese-language web sites abroad, which are banned in China.

Shi Tao was arrested on November 24, 2004, and charged on December 14, 2004. At the time of his arrest, his writings, computer, and other personal belongings were confiscated and his wife was warned by the police that if she told anyone about this action, her husband would be mistreated. On March 1, 2005, the Shanghai Department of Justice suspended the license of Shi’s lawyer Guo Guoting, and on March 16, 2005, Shi was found guilty of “illegally divulging state secrets abroad” in a secret two-hour hearing where he was represented by one of Guo’s colleagues.

Since his arrest, contact with family and legal representation has been limited. During a 10-minute visit with Shi in March 2005, authorities did not allow his mother and brother to give medication to Shi, who was then suffering from the flu. On April 27, 2005, he was sentenced to 10 years in prison and two years’ deprivation of political rights; an appeal filed in May by Shi’s lawyer was rejected and the sentence upheld. In August, Shi’s mother filed another appeal with the support of his lawyer, claiming “serious procedural defects” because the first appeal was rejected without a hearing and did not comply with Chinese criminal procedure law.

In September 2005, it was revealed that corporate internet giant Yahoo! had assisted Chinese government authorities by supplying information used to convict Shi Tao. Yahoo! Holdings (Hong Kong), Ltd. furnished the police with Shi Tao’s account holder information, leading to his IP address and facilitating his conviction. Shi had used a private Yahoo! e-mail account, under which he employed the alias “198964,” to send his notes overseas.

Shi Tao was transferred to Prison No. 1, a high-security prison in Hunan province where he was forbidden from doing any significant writing. In December 2005, Shi Tao was reported to be suffering from respiratory illness and a skin inflammation. He had to do forced labor in a factory that produces jewelry sold by prison authorities. According to his family, the unsanitary conditions of his work and the dust from cutting and polishing stones caused Shi’s health to quickly deteriorate. In April 2006, his family, who was allowed to visit him only monthly, said that Shi’s mental state had degenerated and because of the dampness and overcrowding in his cell, he suffered from skin problems in addition to an ulcer and a heart ailment.

In June 2007, Shi was transferred to Deshan Prison in Changde City, Hunan province. His family reports that his living conditions improved considerably, and he was working as a tracer in a machinery plant in prison four days a week, with regular working hours. He is now permitted to write to his family.

Shi Tao was honored in 2005 with the Committee to Protect Journalists‘ International Press Freedom Award for his courage in this situation and for drawing the world’s attention to China’s intense effort to control information on the internet. His imprisonment has prevented him from receiving the award.

On June 4, 2007, the 18th anniversary of the Tiananmen Square massacre, Shi received a further honor, the Golden Pen of Freedom Award. The award, which is the annual press freedom prize from the World Association of Newspapers, was accepted by the mother of the jailed journalist who said her son was “a direct victim of the shackles of press freedom.”

Shi Tao had joined a U.S. lawsuit claiming Yahoo! Inc. helped the Chinese government convict dissidents. He sought compensation on grounds that Yahoo! Hong Kong and Yahoo! China provided information to the Chinese authorities leading to his arrest. The case was settled out of court around November 15, 2007.

In 2010, Shi Tao was moved to Yinchuan Prison, Yinchuan City, Ningxia Hui Autonomous Region, where he is no longer forced to work. He reportedly suffers from a stomach ailment.