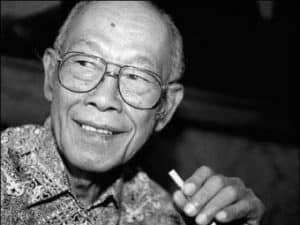 As a young anti-colonial activist, Pramoedya Ananta Toer was first arrested in 1947 by the Dutch colonial authorities for opposing the regime. He was released in 1949, but was arrested again in 1965 after a failed coup attempt that eventually led to the rise to power of President Suharto, who ordered the detention without trial of his opponents, including those suspected of links to communism. Mr Pramoedya was released in 1978, but remained on city arrest in Jakarta. He received the PEN/Barbara Goldsmith Freedom to Write Award in 1988, and his city arrest was lifted in 1992. He died in 2006 at the age of 81.

Pramoedya Ananta Toer was born in 1925, in the Javanese town of Blora. His father was a headmaster and nationalist who inspired Mr Pramoedya’s anti-colonial philosophy. He joined Indonesia’s anti-colonial struggle against Japan during WWII, and against the Dutch after the war. He began his literary career after his capture and detention by the Dutch in 1947, at the age of 24, for writing and distributing revolutionary pamphlets. He went on to write more than 30 books, all of which were banned in Indonesia.

In October 1965, a failed coup by radical military officers led to a violent campaign against the left. All left-wing organizations were forcibly dissolved. Thousands of leftists were killed, while many others were imprisoned without trial, including Mr Pramoedya. During his arrest in 1965, Mr Pramoedya was severely beaten by police, leaving his hearing impaired for the rest of his life. Following his arrest, his books were banned. He was held on the remote island of Buru from 1969, where he was forced along with thousands of other prisoners to build his own barracks and toilets, and to grow his own food in the nearby jungle. Between 1965 and 1973 he was not permitted access to pens or paper, so he narrated his stories to the other prisoners who shared his barracks, and who, in turn, relayed his stories to the other prisoners with whom they came in contact. The works he composed during this time were published as a memoir, The Mute’s Soliloquy, after his release from prison in 1978. He is best known for writing the Buru Quartet, a series of four books chronicling Indonesia’s fight for independence against the Dutch. Mr Pramoedya was awarded the PEN/Barbara Goldsmith Freedom to Write Award in 1988. He died in 2006 after suffering from diabetes and heart disease.