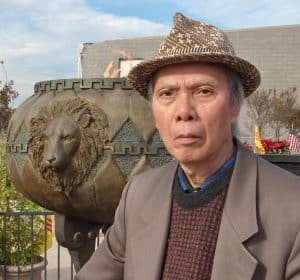 Photo by Jean Libby
Vietnamese poet Nguyen Chi Thien spent almost 27 years in prison for his “politically irreverent poems” between 1960 and 1991. In 1989 he received the PEN/Barbara Goldsmith Freedom to Write Award, and two years later he was released. In 1995 he emigrated to the United States, where he passed away on October 2, 2012, at the age of 73.

Nguyen Chi Thien was born on February 27, 1939, in Hanoi, Vietnam, and knew from a young age that he wanted to be a writer. In 1960, he was asked by a friend to substitute teach for him when he was ill. Chi Thien taught the students that America, not the Soviet Union, had defeated Japan in WWII, contrary to the official curriculum. For this, he was arrested on the charge of spreading “anti-government propaganda.” He was sentenced to two years’ imprisonment without a trial, and ended up serving 3.5 years of hard labor, during which he wrote almost 100 poems without the use of pen or paper, forced to commit them to memory.
He was released in 1964, but was re-arrested in February 1966 on the charge of producing “politically irreverent poems”: they had been circulating orally in Hanoi. Again without trial, he served 11 years and 5 months in prison camps before being temporarily released in July 1977 to create more room for the flow of new prisoners from South Vietnam. Denied employment, Nguyen Chi Thien composed a further four hundred poems.
Worried he wouldn’t survive if arrested a third time, Nguyen Chi Thien decided to send his “incriminating” poems abroad: on July 16, 1979, he handed his handwritten manuscript of about 400 poems to diplomats at the British Embassy. Though they could not offer asylum, they promised that his poems would be published in the West. Upon leaving the embassy, Chi Thien was arrested by Vietnamese security forces and imprisoned, yet again without trial, for a further 12 years: six in Hoa Lo (or “the Hanoi Hilton”) and another six years in prison camps.
In 1984 Nguyen Chi Thien’s collection of poems was published in the United States as “Flowers from Hell,” and translated into several different languages. The collection drew acclaim and in 1985, while Chi Thien was still in prison, he won the International Poetry Award in Rotterdam. The news reached him in an unorthodox manner: angry prison guards waved the book in his face, thinking to intimidate him with proof of his “irreverence” but rather giving him much-needed delight.
In 1989 Nguyen Chi Thien received the PEN/Barbara Goldsmith Freedom to Write Award, and two years later, after interventions by rights organizations including PEN, he was released. He lived for another four years under house arrest in Hanoi, during which time he recovered his health, which had been greatly impacted by his decades of incarceration. In 1995 Chi Thien was granted asylum in the United States, and he was invited to address Congress. Between 1998 and 2001 he lived in France, where he had been awarded a fellowship by the International Parliament of Writers. He then returned to the United States, and in 2004 became an American citizen. He settled in California, where he continued writing until he passed away on October 2, 2012, at the age of 73.

Selected Poems from Flowers of Hell