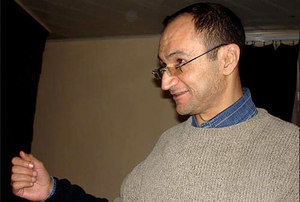 On January 18, 2012, freelance journalist Dzamshid Karimov stopped responding to emails from friends and colleagues and his phone was disconnected. His colleagues eventually discovered that he had again been held in a psychiatric facility.  In 2017, Karimov was reportedly released from the psychiatric clinic; his current whereabouts are unknown.

Dzamshid Karimov is a journalist who was held in psychiatric detention on and off for more than ten years. He is known for being an outspoken critic of the government, and for his reporting on socio-political issues as a contributor to independent journals and web sites. He is also the nephew of former Uzbek President Islam Karimov.

Karimov reported on the May 2005 incident in which troops killed antigovernment protesters in the northeastern city of Andijan. Most recently, he worked as a contributor to the Almaty-based independent online newspaper Liter. According to Uznews, Karimov wrote about social and economic problems as a freelancer.

Following his coverage of the demonstrations and reporting on the killing of civilians in the city of Andijan, local authorities began monitoring Karimov’s activities. In early August 2006, his mother petitioned authorities to remove all listening devices from her house; they refused. In fact, law enforcement agents set up more surveillance equipment in a neighboring building, the Moscow-based Central Asia news Web site Ferghana reported. The family’s long-distance telephone connections had been cut. Also in August, Karimov’s passport was seized by the authorities in Jizzakh after he applied for an exit visa to attend a journalism seminar in neighboring Kyrgyzstan.

On August 31, the head of the regional administration, Ubaidulla Yamankulov, visited the family home and offered Karimov positions at the state newspapers Mulkdor and Tasvir. Karimov refused the offer, according to the reports.

Karimov went missing for two weeks in mid September 2006, after a visit to his elderly mother in the hospital. He was eventually found in a psychiatric hospital in the capital Samarkand, where he remained under successive psychiatric detention orders.

The Uzbek authorities confirmed that Karimov was in psychiatric confinement, without specifying the reason, calling it a “private” matter. In September 2006, a six-month psychiatric detention order was served on him. It was renewed in March 2007, expiring in September 2007. In a message smuggled out to friends, Karimov stated that his health is declining due to the psychotropic drugs he was being given and the constant harassment to which he was subjected. He complained of memory loss, difficulty concentrating and a partial loss of vision.

Karimov was released just before the Muslim festival of Eid al-Adha on November 6, 2011, after U.S. Secretary of State Hillary Clinton visited Uzbekistan. He had reportedly suffered serious damage to his health due to the forced administration of psychotropic drugs. However, on January 18, 2012, Karimov stopped responding to emails from friends and colleagues and his phone was disconnected. His colleagues eventually discovered that he had again been taken back to a psychiatric facility.

In March 2017, Karimov was reportedly released from the psychiatric clinic, according to the Organization for Security and Cooperation in Europe (OSCE), which welcomed his release. His current whereabouts are unknown.