A Story of Two Brains 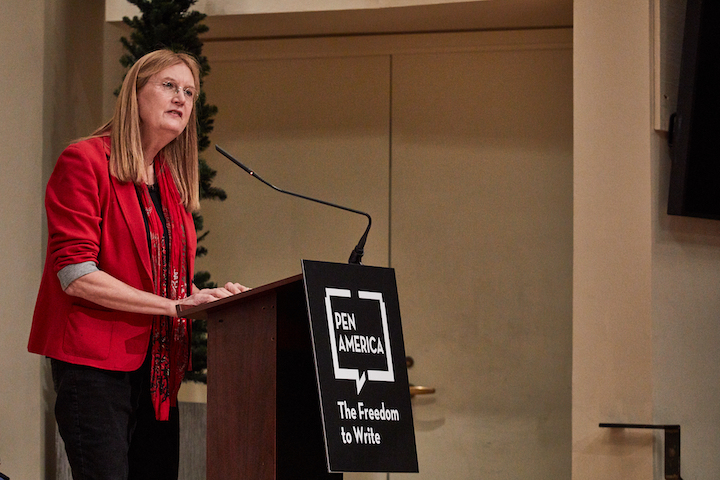 In 1983, Steve Martin starred in a movie titled The Man with Two Brains, a story about a man who falls in love with a brain in a jar. Eventually, his wife is murdered by a serial killer played by Merv Griffin, and when all is said and done, the brain that he has a crush on is transplanted into the body of his dead wife, and the two of them live happily ever after, while the diabolical Merv Griffin remains at large to continue his reign of terror.

I was thinking about that film recently because of a conversation we had at one of our PEN Trustees meetings, a conversation in which the person who wound up having two brains, in fact, was me.

The topic under discussion was whether artists have the right to create work that is considerably outside their own lived experiences. So, for instance, do white writers have the right to write from the point of view of Black characters, or do cis- actors have the right to play transgender parts in film? This question, of course, was at the heart of the blowback against the novel American Dirt last year—a book about the lives of imaginary Mexican immigrants written by a woman who identified at least until 2016 as white. I’m sure most PEN Members remember the controversy, even if—like me—they did not read that particular book, because the question strikes really close to our hearts. Surely if freedom of expression means anything, it means the right to tell the stories we want to tell, to answer the demands of our own imaginations. Period.

You can accuse writers of not writing well, or of creating characters that don’t seem real, or plots that stretch credulity. But surely, the business of erasing artists because we do not like their art is despicable. In the end, if we only know one thing, it is this: that we stand in defense of the imagination, no matter how strange, or unsettling, or controversial that imagination might be. That’s what artists do: We imagine possibilities.

Okay. So that there would be the first brain.

“Surely, the business of erasing artists because we do not like their art is despicable. In the end, if we only know one thing, it is this: that we stand in defense of the imagination, no matter how strange, or unsettling, or controversial that imagination might be. That’s what artists do: We imagine possibilities. . . . But the thing is, sometimes we get it wrong.”

Here’s another thing I believe, and I believe it with the same passion with which I believe in the freedom to create. Artists, which includes everybody in this room, I suspect, are responsible for their work. That sounds uncontroversial, but I think a lot of writers, having completed a story, or a novel, or a screenplay, then decide that, you know, our work is done, we are geniuses, and anyone who has a problem with the work we’ve made is simply jealous, or small-minded, or incapable of comprehending our idiosyncratic brilliance. It’s like that scene in Cast Away—did you ever see that, with Tom Hanks building the fire on the deserted island, and afterwards he struts around the flames shouting, “Yes! I have made fire! With these two hands! I have created fire!” And so on. I admit that I have spoken like that a lot of times after I’ve written something that I’m particularly proud of. I read my book, or I see a column of mine in the newspaper, and I think, “Yes, it’s true, I am a genius, I have made fire!”

But the thing is, sometimes we get it wrong. Many Mexican writers and immigrants praised American Dirt, but there were plenty of others who said that the author got things wrong. Or to pick an example a little closer to home, at least for me, the film Dallas Buyers Club had a transgender character in it played by Jared Leto. And when that movie was out, people fell all over themselves talking about how great that film was, and wonderful it was that a trans character had been presented with such insight and compassion. Jared Leto was nominated for—and in fact won—the Oscar for Best Supporting Actor that year, in a moment that a lot of people felt was a big step forward for diversity and trans representation.

About the only people who felt that that film got things wrong, in fact, were transgender people.  There was no shortage of trans writers and critics who spent a lot of time that year saying, “Actually, that’s not it; that’s not what our lives our like; I know you all tried really hard, and that you meant well, but in spite of all that, you got our stories wrong. And that the story you’ve told is kind of insulting.” But they gave Leto the Academy Award anyway. Many of us had similar things to say about The Danish Girl, a film that—even correcting for history—still doesn’t quite ring true, at least not to my ears. You all nominated Eddie Redmayne for an Oscar for that one, too.

And so, this is the problem for my second brain. Because I hate it when artists get it wrong.  Maybe a single movie, or book, doesn’t matter that much. But if we think that defending freedom of expression is really all that important, then I think we have to feel that it does matter.  Because a single movie, or book, or film really can shape the way people see the world, especially when they’re forming an impression of people—like, say, transgender people—whom they haven’t really encountered in the world, or they think they haven’t encountered.

“It’s perfectly possible to hold both of these ideas at the same time. We can defend the right of artists and writers to create exactly what they feel in their souls—that is, of course, at the heart of so much of our work at PEN America. But we can also hold artists responsible for the work they create. ”

So that’s my story of two brains. Which sounds like a horror movie, I guess, or comedy. But I also think of that Joni Mitchell song, the one that ends, “And you know two heads are better than one.” Because if you ask me, it’s perfectly possible to hold both of these ideas at the same time. We can defend the right of artists and writers to create exactly what they feel in their souls—that is, of course, at the heart of so much of our work at PEN America. But we can also hold artists responsible for the work they create. Being asked to take a hard look at whether or not you’ve got your story right is not the same as cancellation, or censorship. What it is, is the hope that when you make art, or when you tell a story, that the story you are telling is true. And by true, I don’t necessarily mean realistic. Because we all know that even when a story takes place, say, a long time ago in a galaxy far far away, that that story can still be true. Sometimes, in fact, there can be more truth in fiction than in nonfiction.

I wanted to end this by sharing one more story with you, that kind of sums up my feelings on this topic. This is the true story of the Lion of Gripsholm Castle—which you have to admit is a pretty great name for a story. So in 1730, the King of Sweden was given a lion as a present. I don’t know where the lion came from, but I’m pretty sure it wasn’t Sweden. In any case, when the lion died, it was given to a group of taxidermists to be stuffed and preserved and kept in Gripsholm Castle, where the King lived. I guess he wanted to look at the stuffed lion and say like, “Yeah, back in the day I had a lion, now that was awesome.” Now, let’s agree that these taxidermists were talented artists, and that they were probably among the best taxidermists in all of Sweden, being in the service, after all, of the King. And that these artists had the freedom to practice their craft, and that no one should ever have been in the business of cancelling them, or telling them what they could or could not create.

But here’s the deal. When all was said and done, and they presented their work to the King, this is what they came up with. Ladies and gentlemen, the Lion of Gripsholm Castle. 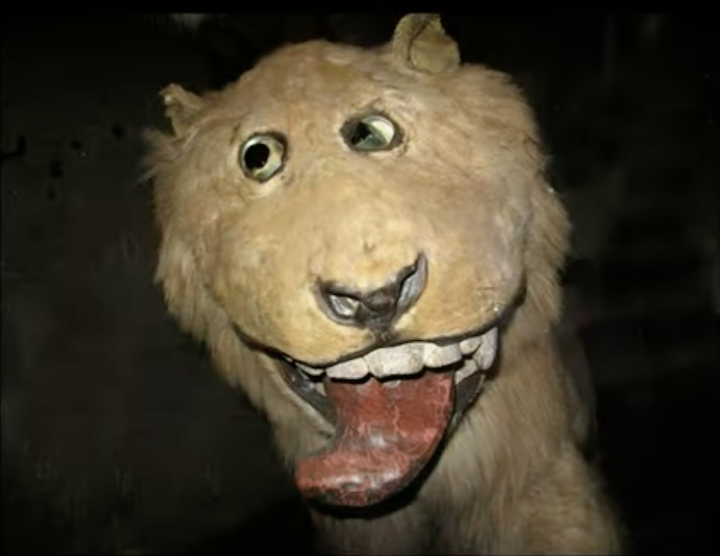 So what went wrong here? The artists were good at their job, and they practiced their craft as best they could. There was only one problem: None of them had ever actually seen a lion before. So they had no idea what one was supposed to look like.

I can tell you I’ve seen a lot of films and read a lot of books about transgender people written by people who had no idea what a life like mine is actually like. I’m not arguing for censorship, or cancellation, or putting any fetters of any kind of the freedom to create. In the end, my first brain wants you to know: Artists have to be free to invent, to speak, and to create, and anyone who would interfere with that process can go straight to hell.

My second brain just wants to add one thing, though.

That’s not a lion.