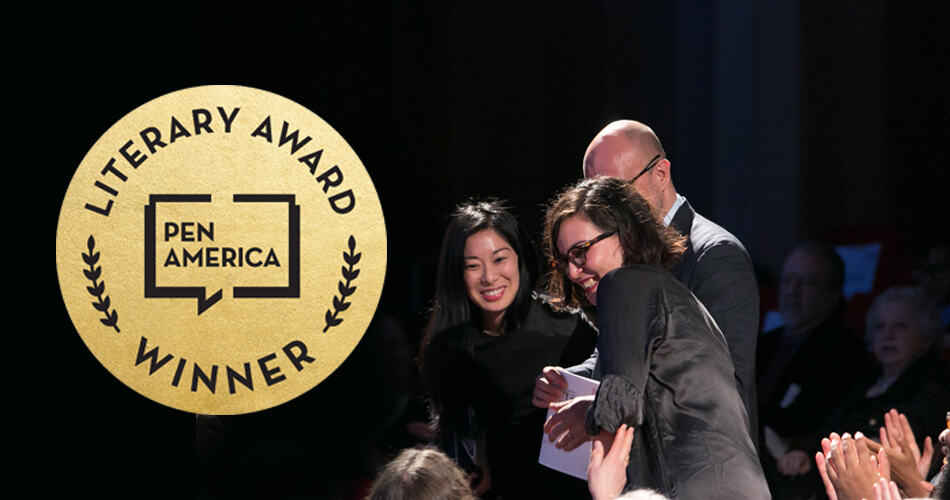 The trailblazing chronicler of modern gay life, Edmund White, won the PEN/Saul Bellow Award for Achievement in American Fiction, for a body of work judges said was marked by “unsentimental tenderness, sharply observant wit, and an unsparing examination of the self.” Irish novelist Edna O’Brien received the PEN/Nabokov Award for Achievement in International Literature for work that allows readers to “look clearly and dispassionately upon the spectrum of human emotion.”

Triumphing amid a field of five highly acclaimed finalists, poet Layli Long Soldier’s debut collection WHEREAS, a piercing rejoinder to the US Congressional resolution of apology to Native Americans, claimed the night’s book of the year prize, the PEN/Jean Stein Book Award, and its $75,000 purse. Described by judges as a “grand reckoning with language and history,” WHEREAS was praised for its “elegant and fierce introspection” and “rectifying spirit of restless invention.”

Jenny Zhang won the PEN/Robert W. Bingham Prize for Debut Fiction for her short story collection Sour Heart, a stark depiction of hardscrabble Chinese American adolescence in New York City; and Alexis Okeowo’s A Moonless, Starless Sky: Ordinary Women and Men Fighting Extremism in Africa was awarded the PEN/Open Book Award. The PEN/Diamonstein-Spielvogel Award for the Art of the Essay was awarded to Ursula K. Le Guin, who passed away in late January, 2018 at age 88, for No Time to Spare, a set of ruminations on aging and the universe. The accolade was accepted by her son Theo Downes-Le Guin.

“Language lives longer than people and therefore its permanence is vital,” said Edna O’Brien. “It moves us from one generation to the next; it’s immortal.”

Lifetime and career achievement awards were conferred upon novelists, playwrights, poets, and translators. Luis Alfaro, whose critically acclaimed dramatizations have brought the experience of inner city, blue collar Los Angeles Chicano communities to audiences worldwide, received the 2018 PEN/Laura Pels Award for Master Dramatist; Barbara Harshav was awarded the PEN/Ralph Manheim Medal for Translation recognizing her more than 40 translated works; Kamau Brathwaite received the PEN/Voelcker Award for Poetry for seminal contributions to the Caribbean literary canon that innovate across language, typography and form; and Dave Kindred received the PEN/ESPN Lifetime Achievement Award for Literary Sports Writing for his riveting storytelling and spare language, and a quarter century of contribution to the canon of sports writing.

“This year’s awardees represent the near and far corners of the literary landscape, including writers who have shattered barriers of race, class, ethnicity, geography, gender and sexual orientation to bring stories to new audiences, unlock empathy and take places of distinction within our collective canon,” said PEN America Executive Director Suzanne Nossel. “In times of challenge great literature offers a desperately needed window onto other possibilities. We celebrate these extraordinary writers, and we thank them for keeping us nourished at a time when inspiration is sorely needed.”

The following winners were announced live at the 2018 PEN America Literary Awards Ceremony on February 20, 2018, at the NYU Skirball Center in NYC.

Learn about our 2018 lifetime and career achievement honorees >>

To the author of a book-length work of any genre for its originality, merit, and impact, and that has broken new ground by reshaping the boundaries of its form and signaling strong potential for lasting influence.

From the judges’ citation: “Layli Long Soldier’s ambitious WHEREAS is a grand reckoning with both language and history. As citizen, as mother, as poet, she asks with profound tenderness What man [or woman] is expendable? then leads the journey towards a consciousness of song as tough-minded inquiry and reclaimed territory. An elegant and fierce introspection defines this volume of poetry, as does a rectifying spirit of restless invention. The deep wound in the American psyche is genocide; and here, Long Soldier skillfully disrupts easy abridgments that render that inheritance a simple matter of an official Apology. WHEREAS is also about motherhood, being an artist, and the political valence of writing and loving. Its intriguing architecture propels us into the naturalness of interrogating the structures of language and power and creating a convenant with the self. We admire her artfulness as much as her depth, grace, sense of purpose, and essential imagination.” 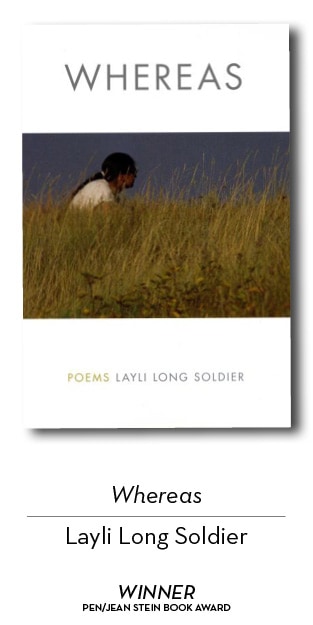 From the judges’ citation: “With humor and stunning honesty, Sour Heart tests and topples such categories as “immigrant fiction” or “coming-of-age story”—making its own vital, original, and wholly irresistible footprint on American letters. The book is rangy in tone and texture, a high stylist moving from the scatological to the sublime and back again. And Zhang is uncommonly, beautifully frank about that which embitters and that which enlivens. Sour Heart enlarges the reader’s understanding of the world with a voice so run through with lively contradiction it is as tender as it is rough, as mature as it is youthful, both urgent and cool.” 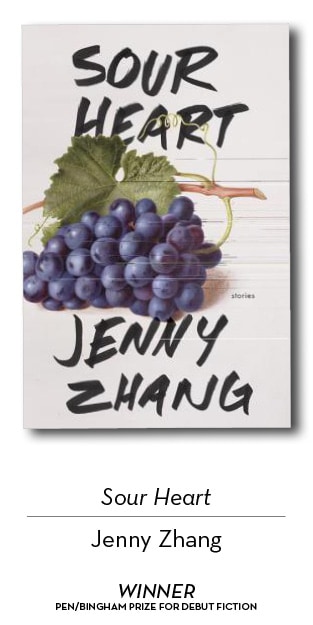 To an exceptional book-length work of any genre by an author of color, published in the United States in 2017. JUDGES: Eduardo C. Corral,  Kaitlyn Greenidge, Amy Quan Barry.

From the judges’ citation: “In A Moonless, Starless Sky, journalist Alexis Okeowo humanizes the lives behind the headlines, transforming often one-dimensional news stories from the African continent into narratives of endurance and survival. A young Ugandan couple escapes the Lord’s Army; a Mauritanian activist battles the ancient practice of slavery; locals fight back against Boko Haram in Nigeria; in Somalia, young women pursue their dreams of playing basketball despite religious edicts. These are narratives of everyday people confronting unimaginable challenges where one’s very existence becomes an act of resistance. Okeowo’s reporting demonstrates the multiplicity of human resilience and regeneration in impossible times. In a time when our own leaders conflate poverty with personal character, we can think of no more important book. The individuals showcased in A Moonless, Starless Sky are among the best and brightest anywhere in the world.” 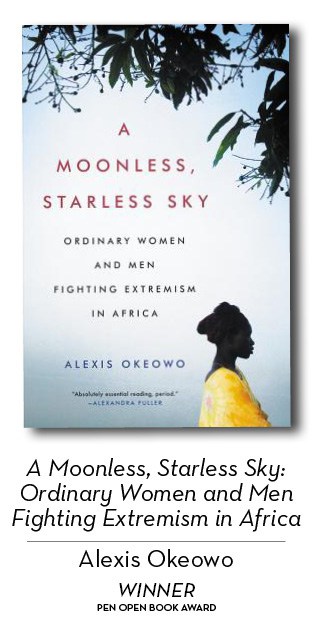 For the living author of a major work of Paraguayan literature. Another $3,000 is given to the winning translator in order to bring the work to the English-speaking world.  JUDGES: Lorea Canales, Ruben Rios Avila, and Julia Sanches.

“The jury has unanimously chosen to recognize Fantasmario, by Javier Viveros, with the Tuck Award. In these stories about the Chaco War between Paraguay and Bolivia we are not dealing with a patriotic “Paraguayan” defense of the war, but rather with a tale of the question of war itself, of its suffering bodies, and of the mark that war leaves on the consciousness of its survivors. To achieve the effect he seeks, Viveros recognizes that one of the ghosts he must confront is literature itself.” 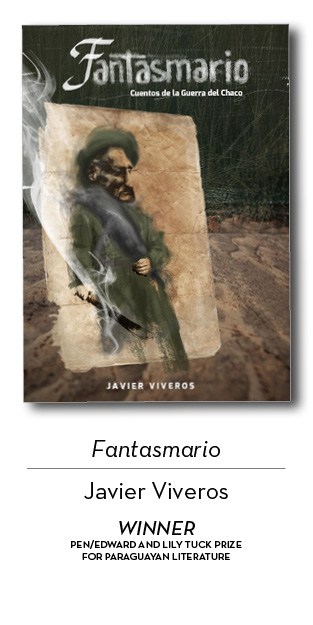 From the judges’ citation: “The jury is proud to honor Len Rix’s exceptional translation of Magda Szabo’s novel Katalin Street, which tracks the intertwined lives of three Budapest families before and after the devastation of World War II. This beautiful translation illuminates Szabo’s deep humanity. Translating Katalin Street‘s intricate, elegant text required tremendous subtlety and artistry to achieve such flawlessness, and Rix clearly possesses the mastery to allow Szabo herself to stand out as an exemplary writer. This translation from the Hungarian does that, and Len Rix has gained lifelong admirers among the jury.”

PEN/Diamonstein-Spielvogel Award for the Art of the Essay ($10,000)

For a book of essays published in 2017 that exemplifies the dignity and esteem that the essay form imparts to literature. JUDGES: Vinson Cunningham, James Fallows, Gillian Tett.

From Theo Downes-Le Guin speech: “My mother was very suspicious about Internet’s ability to engage her into relentless conversation about her writing — so relentless as it captures from actually writing, but she set aside her reservations when it came to blogging. No Time to Spare combines unique intimacy of the letter with a polish of a published essay.” No Time to Spare is the last book by Ursula K. Le Guin, a person who fiercely believed in the possibility of literature, especially the imaginative literature, to change the world by imagining new worlds. She may have left us, but her visionary words never will. 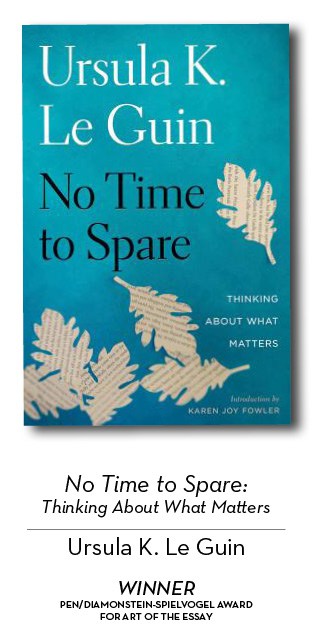 From the judges’ citation: “Critics have called John Farrell’s Nixon “brilliant,” “exhaustive,” and “Shakespearian,” and all are deserved. Yet most stunning is the meticulous and eerie portrayal of Nixon’s toxic psychological progression, so that in the end Watergate or something like it was fated to happen. Horatio Alger tales run rampant in our culture, and Nixon played his to the hilt: the lower-middle-class kid—the “somebody who was nothing”—who rose to the top despite all obstacles. Yet so often omitted from the myth are its darker underpinnings: isolation, envy, self-pity, and finally, paranoia. We watch this all unfold in the best literary tradition: it is poignant and chilling simultaneously, and Farrell accomplishes this for the first time using newly released files and archival material. “I had to win,” Nixon said after an early and dirty campaign: “That’s something you don’t understand.” Unfortunately, however, we do, for hasn’t such “victory” become our national creed? Nixon’s descent is our descent, and this understanding elevates Farrell’s account into the true realm of tragedy.” 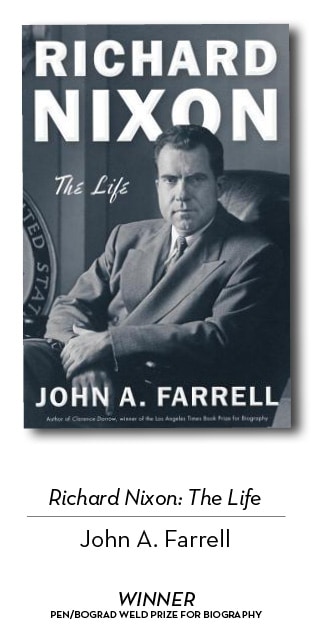 For a book that exemplifies literary excellence on the subject of the physical or biological sciences and communicates complex scientific concepts to a lay audience. JUDGES: Luke Dittrich, Deanna Fei, Dr. Carl Hart.

From the judges’ citation: “When Joseph Lister began his career as a surgeon in Victorian England, colleagues wore aprons caked with old blood and rarely washed their knives between procedures. Infections ran rampant, and hospitals were often just way stations to the morgue. In The Butchering Art, Lindsey Fitzharris provides a clear-eyed view over Lister’s shoulder, and lets us watch as he progresses toward the revolutionary idea that invisible germs could be lethal, and that killing those germs might save countless lives. Fitzharris is a brilliant narrator of visceral operating-room scenes, but her account of the medical community’s prolonged and contentious resistance to Lister is just as compelling. This important and compulsively readable book is a reminder that scientific advances face strong headwinds, and that even the best ideas need fierce champions.” 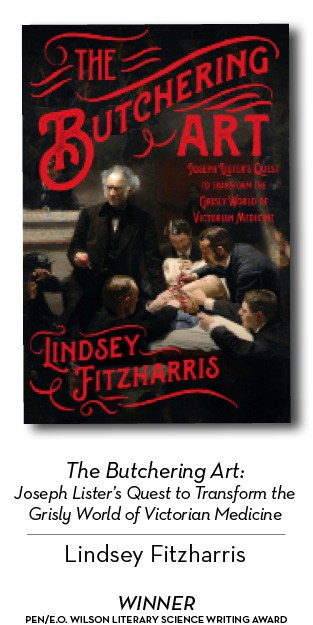 To honor a nonfiction book on the subject of sports published in 2017. JUDGES: Chloé Cooper Jones, Sally Jenkins, Joe Nocera.

From the judges’ citation: “There has rarely, if ever, been an athlete as famous the world round as Muhammad Ali, and there has rarely, if ever, been an athlete whose life has been so thoroughly documents, in countless photographs and articles, and of course in books as well. And yet Jonathan Eig’s Ali: A Life, stands above them all. It is a beautifully-written, transcendent biography that renders vivid in every stage of how remarkable life: Ali the brash teenager, Ali the proud Muslim, Ali the conscientious objector—and then: Ali the warrior, the man of peace, and finally the icon.  More than simply describing a life, Eig has created a context that allows us to understand that life more fully than we ever have before. This is biography at its best.” 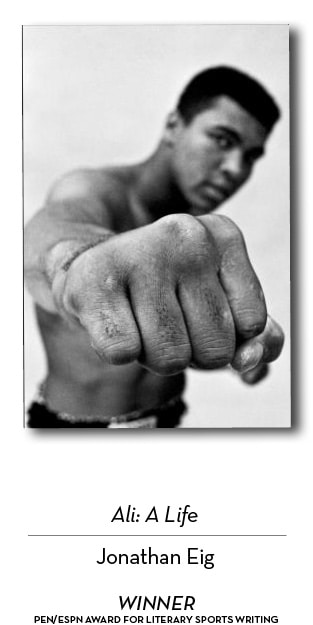 Recognizing 12 emerging fiction writers each year for their debut short story published during a given calendar year in a literary magazine or cultural website and aims to support the launch of their careers as fiction writers.