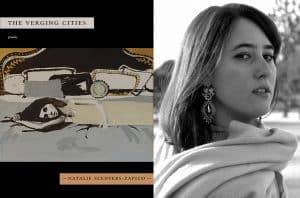 The PEN/Joyce Osterweil Award for Poetry of $5,000 is given in odd-numbered years and recognizes the high literary character of the published work to date of a new and emerging American poet of any age and the promise of further literary achievement.

Natalie Scenters-Zapico is an important emerging poet whose formal and tonal range in The Verging Cities is impressive and disarming. Her voice is honest, engaging, and complex as she explores the liminal space of the U.S./Mexico border with vivid imagery that moves fluidly between Juárez and El Paso. At times both tender and funny, she writes so that the border becomes not just an idea, but a rich and real world. With poems that are as intelligent as they are urgent, Natalie Scenters-Zapico offers a necessary poetic voice in these perilous times.

Camille Dungy is the author of Smith Blue, Suck on the Marrow , and What to Eat, What to Drink, What to Leave for Poison. She edited Black Nature: Four Centuries of African American Nature Poetry, co-edited the From the Fishouse poetry anthology, and served as assistant editor for Gathering Ground: A Reader Celebrating Cave Canem’s First Decade. Her honors include an American Book Award, two Northern California BookAwards, a California Book Award silver medal, a Sustainable Arts Foundation grant, two NAACP Image Award nominations, and a fellowship from the NEA. Trophic Cascade, her newest collection of poems, will be published in February of 2017, and Guidebook to Relative Strangers, her first collection of personal essays, will be appearing in the summer of 2017.

Patrick Philips ’ third book of poems, Elegy for a Broken Machine, was a finalist for the National Book Award in 2015. A past Guggenheim and NEA fellow, he is also the author of Boy and Chattahoochee, which won the Kate Tufts Discovery Award. Phillips’ first book of nonfiction, Blood at the Root: A Racial Cleansing in America, was published by W. W. Norton in 2016. He lives in Brooklyn and teaches at Drew University.