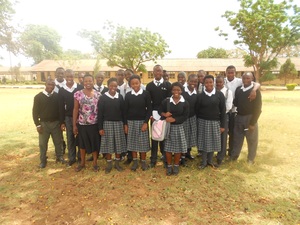 What is a project that Zambian PEN Center has been working on in recent months?

The most consistent thing that Zambian PEN Center has been doing is what we call the Writers’ Circle, which is a community of writers that meets every month at the Alliance Française, with whom we have a partnership. Most of the attendees at the Writers’ Circle are members of Zambian PEN Center. During these meetings the attendees share their work and excerpts from their books, while at other times, they discuss particular topics that affect writers, such as obstacles to publishing, writing for children, writing for the screen, or writing dramatic pieces. In August, we signed a contract with PEN International, which is supported by SIDA. Together, we are sponsoring a project to teach and empower high school kids with writing skills in indigenous languages. This civil society project is called “Promoting, Speaking, and Writing in Indigenous Languages.” First, we will be covering the Nyanja/Chewa language. This is the first time we are doing this type of project.

Zambian PEN Center has been involved with World Literacy Day, which is on September 8. In Zambia, it started off as a day but has become a month-long celebration of literacy due to the highly positive and involved response. During the month of September, Zambian PEN Center is involved in many activities celebrating literacy, like the parades in all ten provinces. In addition to that, Zambian PEN Center hosts mobile reading tents that run anywhere from one day to one week, so that everyone can come in, see, and participate in reading events. Usually there are one or two symposiums where stakeholders are invited to discuss issues and barriers to literacy based on a theme.

In 2014, we participated in a very unique program where we took part in an international exchange with a school in Montana called Chrysalis. The program lasted about a month and there were exchanges of poetry and literature over Skype.

What are the key free expression challenges facing Zambia?

We have not had a lot of instances in this country where people have been arrested and charged with defamation or abuse of freedom of expression. This past year, however, there was an issue with an artist, known as Pilato, who had produced two songs that the President took issue with, thinking they were defamatory. The artist was arrested and detained but released because of civil society pressure. In the last three years, some private radio stations have been temporarily shut down for hosting opposition political party leaders on phone-in talk shows. Since the change of government from a one-party state to a multi-party state after 1991, freedom of expression has been encouraged. Whenever there is a new president, there are challenges, but nothing so far has been alarming. Since 1991, we have had private media, but before that, everything was government controlled. There is still a lot of propaganda with the government-controlled media, but it is good that there is an alternative source from which the general public can get information.

Would you share with us a sense of the literary traditions in Zambia?

Yes, the literary traditions in Zambia have a very interesting history. Before the country gained its independence in 1964, the literary scene was really thriving. There was a lot of literature being promoted, both international and local. When Zambia became independent, this continued, and a lot of books in indigenous languages were written during this time.

However, since 1991, there has not been a deliberate policy that encourages the private sector to participate in the publishing industry. Only in the last five years have Zambians been writing a lot, and most of these are self-published authors. Before that, most books used in school to study literature were from East and West Africa, by such authors as Ngũgĩ wa Thiong’o and Chinua Achebe, or from Europe, like Sir Thomas More and George Orwell.

In terms of creative writing, there has not been that much encouragement, except if one is writing for the media. There is a direct policy encouraging writers to produce work for media outlets. Since publishing is not encouraged as much, more than 85 percent of those who have published in the last few years are self-published through outlets such as Amazon or private Zambian publishers, but those still print abroad.

Can you update us on something new in the literary world of Zambia today?

Since last year, there has been a lot of pressure on the government to support the publishing industry. There is no official policy to promote the industry, but the government has pumped some money into a Zambian publishing company that is government owned. Now Zambians can go there and get their books printed. As a result, a lot of Zambians have become interested in writing in the last two years. People have the desire to express themselves, but they did not have a platform before. To help push the government to take an interest in putting money into the publishing company, people that had self-published would invite government officials to the book launches and then try to convince the officials to work towards creating government-funded publishing.

Who is a writer from Zambia that we might not know about? Would you introduce us?

There are quite a few female writers of note who are flourishing and producing great work. This past year Namwali Serpell, a Zambian writer who is based in California and teaches English at the University of California, Berkeley, wrote a short story entitled “The Sack” that was entered for the Caine Prize, which is the biggest short story writing prize in Africa. She won the prize and became the first Zambian to do so since the award’s inception 10 years ago. Because she won that prize, the Caine Prize orientation, a workshop that prepares writers for the competition, will be held in Lusaka in 2016.

Another Zambian writer of note is Princess Zindaba Nyirenda, who comes from the royal family of one of the tribes in Zambia but now resides abroad. She published a book entitled Ta-Lakata: The Tears of Africa, which follows the trials and tribulations of African immigrants in the diaspora. This book is available in the United States at select Barnes and Noble bookstores.

However, local Zambian writers are not internationally well-known because when they publish, their books are not reaching an international audience. One of the emerging Zambian writers still residing in Zambia is the young novelist Oswald Chanda Penda. He wrote a novel in 2013 entitled Footprints. He also put together an encyclopedia of Zambian names, which was launched late last year. This is the first time that an encyclopedia has been compiled in the way it has, and a senior government official representing the vice president of Zambia graced the book launch. Penda also owns a self-publishing company.