Writers in Residence: “A Matter of Politics” – A Poem During Pride Month from Lolita Agamalova

Where can we look to find joy amidst the chaos of our present moment? The Writers in Residence at-home video series from the PEN America World Voices Festival gives readers a glimpse into leading writers’ interior lives and hidden talents beyond their writing desks. Whether cooking meals, crafting cocktails, strumming instruments, entertaining kids, or performing poetry in their living rooms, our writers-in-residence remind us of the little comforts of staying at home in a time of unprecedented dislocation. 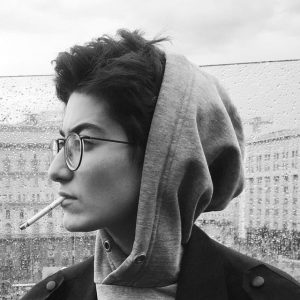 Poet Lolita Agamalova shares her latest poem exploring love, relationships, and the politics of the body as a kind of modern queer performance art. She begins with an introduction: “Hello, my name is Lolita Agamalova. I’m from Russia, from Moscow. Today, I would like to read a poem that is called ‘A Matter of Politics.’”

Check out her video now, and read more of Lolita’s poetry on the official website of the Dragomoshchenko Prize.

Read the Poem in Russian

Monique Wittig, The Lesbian Body, Translated from the French by David Le Vay

we fucked as if we were fucking for everyone
fucked up in the black membranes of blinding night
esse est percipi, having forgotten and killed in every aperture
sliding wormholes
re-inhabiting myself re-melting everyone else
every night I was collecting myself in this fucking
I was gathering myself in this long big love
and having gathered myself so that blood festered in my cunt
turned into a moat
turned almost seamlessly
all broken pieces regenerated
how near stitchlessly your body reassembled
every night as I looked for your pieces
I thought
about the men who smashed you to bits
about the bastards who ate your pieces
about your brazen bones
within gnawed rotting meat
about this pitch black love of mine
forgetting ontological divisions
forgetting borders in entwined contours
the contours did not hurt
we entered a new invincible world
and fucked so that time would freeze up
it was becoming a matrix
the pink vagina
of a new utopia
it collected the whole world and inverted it
just so that after three years
you could leave me for a right-wing propagandist
I already see how she spins the rallies
I go to giving me
the Judas Kiss
reads Dugin and then licks you out
with tongues of violent militarism licks you
after the award ceremony on the fucking red square
I know more about her than you do for we had
a tender friendship
a tender tender friendship
esse est percipi tender tender friendship
cunt is an organ of knowledge tender friendship
lesbian jihad or tender tender friendship
lesbian jihad begins with a faithful bitch
lesbian jihad or the debate between Spinoza and Hobbes
lesbian jihad or the half of a Labrys
lesbian jihad
carthago delenda est

Lolita Agamalova is a Russian poet from Grozny, Chechnya. She lives and works in Moscow and currently studies at the faculty of philosophy at the State Academic University for the Humanities. She is the author of the book of poetry and prose Along the Thought of the Body. Her interests include new feminist ontologies/epistemology, utopian studies, and philosophy of affects. She has been published in the journals Island and Gender Studies, as well as the online editions of Halftone, Snob, and Letter to Syg.ma. She was longlisted for the Arkady Dragomoshchenko Prize in 2019. Her poems have been translated into English.

Previous Editions of “Writers in Residence”

Writers in Residence: Stitch in This Time with Elisabeth Åsbrink