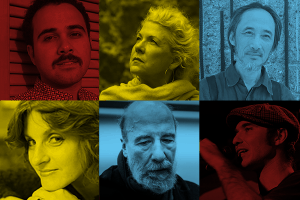 In anticipation of his reading at the 2019 World Voices Festival event Cry, the Beloved Country, PEN America is honored to present an original essay by internationally acclaimed author Ma Jian, translated by Flora Drew. Across the world, writers have responded to growing economic inequality, social injustice, political oppression, and eroding freedoms with some of the most powerful messages of resistance, resilience, and hope. At Cry, the Beloved Country, Ma Jian (China) will join Raúl Zurita (Chile), Marianna Kiyanovska (Ukraine), Ahmed Naji (Egypt), Christos Ikonomou (Greece), Kirill Medvedev (Russia), and Jennifer Clement (United States and Mexico). The event will be presented in the authors’ original languages, with simultaneous written English translation. Join us for an evening of solidarity and hear moving accounts of where and how things have gone awry. Learn more here »

“Cry, the Beloved Country” is a beautiful title. Tyrants invariably label dissenting writers as “enemies of the people,” deliberately conflating criticism of a regime with hatred for a country. But sincere dissent is rooted in love. It is only because writers love their countries that they are prepared to risk imprisonment or exile to give voice to the silenced suffering of their compatriots.

I was born into a country where no one could dissent or cry out in pain.

As soon as Mao’s Communist Party took power in 1949, it subdued the Chinese people through violence, propaganda, and false utopias. As a child, I worshiped our dictator like everyone else. During the Great Famine, which claimed over 45 million lives, I never heard anyone cry or question whether Mao was at fault. My dream was still to grow up and emulate a Communist hero who in the Korean War blocked American gunfire with his chest.

Nor did I see anyone cry in the Cultural Revolution, not even the teachers my classmates and I denounced. As the country descended into mob violence, my devotion to the Party remained absolute. One evening, however, I saw an old man picking up political pamphlets and posters, and asked him curtly what he wanted them for. He pointed to his loot and said, “These will be important documents for future historians.” His reply startled me. I realised suddenly that my actions, and those of all my compatriots, the anthems we sung, the pamphlets we wrote, would one day be judged by history.

I began to venerate the written word, its ability to connect minds and record the truth. From the back of a cart filled with confiscated books, I stole a Chinese dictionary, took it home and copied it out word for word. While outside, schools were being closed, books burned and temples ransacked, each character seemed like a sacred object that demanded to be cherished and preserved.

“I began to venerate the written word, its ability to connect minds and record the truth.”

It was only when Mao died in 1976, that I saw my nation shed real tears. Countless millions had been slaughtered and persecuted under his rule, but still the battered hordes mourned their tyrant in unison.

After inflicting so much chaos, the Communist Party knew it needed to open up the country to survive. It encouraged the Chinese people to make money and “dare to think.” I moved to Beijing and became a photojournalist and painter. Newly translated works of foreign literature exposed my generation of writers and artists to other ways of thinking. We realised that Western democracies were not capitalist hells that Chinese Communists had a duty to liberate. Despite their flaws, they were peaceful countries that respected fundamental rights and freedoms. Places where, according to “Howl,” people were free to sing out of their windows in despair and cry “all over the street.” Ginsberg saw America as a hell he longed to escape, but to us it sounded like paradise. We all yearned for the day when we could sing out of our windows in despair.

But when the Chinese began to demand political reform, the Party hardliners clamped down. In a campaign against “spiritual pollution” my sombre paintings were condemned, and I was detained by the police. On my release, I set off on a three-year journey through China. At a time when independent travel was illegal, each step felt like an act of defiance. But I was determined to forge my own path and see my country with my own eyes. I refused to allow a political party to tell me how to live or what to believe. When I returned to Beijing, I wrote my first novel. It was promptly condemned and pulped by the government, and a permanent ban was placed on my work.

Just two years later, it appeared China really was about to change. Students called for freedom and democracy, sparking a nationwide protest movement. For six weeks, millions of people gathered in Tiananmen Square. One morning, I climbed the central monument to look down at the vast crowd below, and I saw my beloved country crying, not in despair, but with joy. The Chinese people had found the courage at last to unshackle their minds and resist their oppressors.

“I still believe that literature and art are forces that will outlive man-made tyrannies.”

The Tiananmen Massacre that crushed the movement on June 4 extinguished all possibility of political reform. Thirty years later, the Communist Party is still in control, and continues to whitewash history, suppress free thought, and outlaw dissent. Swathes of journalists and scholars have been imprisoned. Li Hong, Yang Tianshui, and Nobel Laureate Liu Xiaobo all died after falling ill in jail. Tibetans are setting fire to themselves in their struggle to preserve their culture. Three hundred eighty-six Uyghur intellectuals, such as Rahile Dawut, Abdukerim Rahman, Abdulqadir Jalaleddin, have gone missing, and are presumed to be languishing with a million other muslims in the concentration camps of Xinjiang.

Despite it all, I have not surrendered completely to pessimism. The Chinese language is my homeland. From exile, I can use it to drag repressed memories into the light. After 70 years under totalitarianism, will the Chinese find the courage to shake off their chains? If they don’t, then at least they can refuse to tell lies. I still believe that literature and art are forces that will outlive man-made tyrannies. And thanks to organisations such as PEN America, persecuted writers can feel that we are not alone. When we stand together and defend freedom of speech, tyrants around the world will sense that they are on the wrong side of history and that truth and justice will one day prevail.

Join #PENOutLoud on 10/26, when @PamelaPaulNYT launches 100 THINGS WE'VE LOST TO THE INTERNET in conversation with @laurenoyler. The book offers “powerful insights into both the profound and the seemingly trivial things we’ve lost.”
https://pen.org/event/pen-out-loud-pamela-paul-with-lauren-oyler/