The PEN World Voices Festival As It Happened: “Armenian Genocide: A Dark Paradigm” 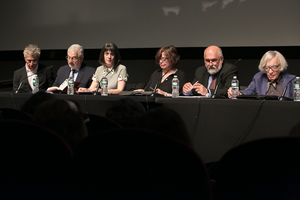 In 1915, 1.5 million Armenians perished. Much of the world has yet to acknowledge the systematic killing, torture, and displacement of the Armenians as genocide. On May 6, 2015, PEN scholars gathered to pay tribute to eighty-two writers and cultural leaders who were among the dead. The event was not a bleak centennial memorial but rather an inspiring commemoration of Armenian authors who continue to endure through the cultural lives of their work. The six panelists who took to the stage in tribute were Eric Bogosian, Maureen Freely, Nancy Kricorian, Robert Jay Lifton, Ronald Grigor Suny, and Ragıp Zarakolu.

Peter Balakian introduced the event by speaking about the two-thousand-year Armenian literary tradition. He recounted Raphael Lemkin’s notion that genocide is not only the physical annihilation of people but also the destruction of their culture. The remembrance and invocation of Armenian literature is a step forward in beginning to reconcile the loss.

Historian Ronald Grigor Suny contextualized the discussion with a brief history of the systematized destruction of the Armenian military and intelligentsia. He explained that many Armenian men joined the Ottoman army to fight the Russians. Despite this show of loyalty, in March 1915, the soldiers were demilitarized and turned into laborers, blamed for the Ottoman defeat by the Russians. The former soldiers were easily identified, marked, and murdered. The following weeks were spent gathering and killing Armenian writers and artists, making it impossible to organize a movement against the impending genocide. These deaths led to the silencing of an entire generation’s artistic legacy. Those who remained were left to grapple with the trauma.

Balakian read a piece by his grandfather’s cousin, Krikoris Balakian, entitled “Remembering the Nights of the Arrest.” Bogosian read Atom Yarjanian’s “The Dance,” a poem about the Hamidian and Adana massacres, written in 1909. Freely read poems by Daniel Varoujan, whose work celebrated Armenian pastoral life. Suny read an excerpt from the book “A Traveler and His Road,” by Kostan Zarian, a writer who encompassed the condition of twentieth century Armenian exile. Kricorian read an excerpt of “Among the Ruins” by Zabel Yesayan, an Armenian writer who survived the genocide but perished in Stalin’s purges. Yesayan wrote about “the violence of grief,” describing the possibility of survival amidst destruction. The readings culminated with poems by Vahan Tekeyan, a leading figure of the modern Armenian revival movement. The texts were read in Turkish and English, with the help of Freely’s on stage translation—a symbolic gesture that spoke to the power of the international present to give voice to the truth of the localized past. Zarakolu reflected on the enduring impact of unpunished crimes against humanity evidenced by executions of Armenian writers in 2007.

The invocation of these writers inspired a discussion on why writers matter. Lifton said that writers are a society’s intellectual witnesses—key symbolizers that constitute culture. Without them, people who rely on this cultural consciousness suffer. Freely noted that the Armenian genocide is not included in Turkish textbooks. This has grave societal consequences, especially for Turkish citizens of Armenian descent: the official history must be memorized, but the secret history these families carry must not be spoken aloud.

An audience member asked how to explain the genocide to his children. Lifton encouraged honesty. He said the flow of history through the generations is a gesture of peace and can free children of history’s horrors by allowing open discussion. The truth is what the survivors are left with.

This piece was first published on Words Without Borders.