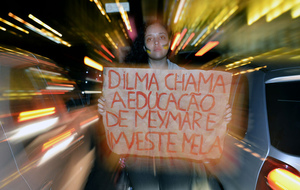 As the World Cup stokes increasing excitement, at PEN we’re taking a close look at the free expression and human rights issues simmering beneath the glitzy headlines. The USA rightfully celebrated a gutsy win against a skillful Ghana team this week, but we still give the USA a red card for free expression based on the NSA’s ongoing bulk surveillance. And Cameroon, which in previous World Cups has captured the hearts of soccer fans around the world, has found its on-field performance paralleled by its abysmal treatment of journalists and writer Enoh Meyomesse, who remains in prison after repeated postponements to his trial.

Street protests in Brazil against spending on lavish stadiums have continued, but are much more muted than the million-strong demonstrations of a year ago. Indeed, the first on-field protest began before the opening kickoff, when the son of Guarani author Olívio Jekupe hefted a poster for indigenous lands rights against logging and illegal settlements. The poster was censored from the international television feed.

It is unclear at this point whether FIFA has forced Brazil to implement Kangaroo courts like it did in South Africa, which were used to mete out up to 15-year prison sentences in less than 24 hours. Many of the allegations of foul play by fans remain rumors, such as Brazilians fraudulently buying tickets meant for the disabled and leaping out of their wheelchairs at exciting moments in the game, or Argentine fans chanting racist slurs.

Meanwhile, there is growing recognition that diversity is important for World Cup teams to succeed. The Fusion network documented the importance of immigrants to the U.S. national team, and the Global Post looks at immigrants in international clubs.

And for you readers out there, check out Three Percent’s World Cup of Literature, where they pit books by authors from all 32 countries against one another in a rough and tumble contest with plenty of dives and bold calls by the referees.