Works of Justice: The Reality Poets on “Wheeling and Healing” 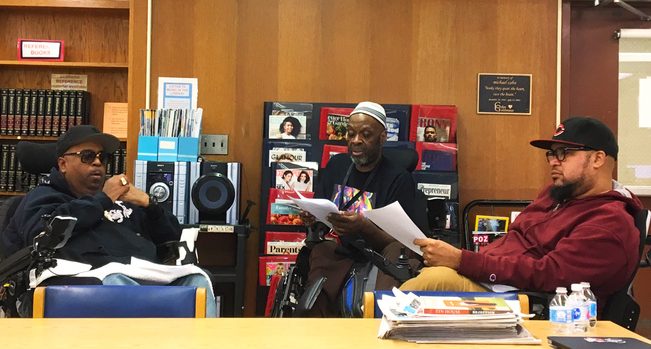 “All of the Reality Poets have lived a life shaken by violence, bravely they offer up these stories. They do not lie in the telling of these stories, they do not soften the blows. Your comfort is never priority over truth.”
—Joel François, Contributing Editor and Reality Poets Coach

It was a stormy Tuesday when our PEN America Prison Writing Program team navigated through snow-slick streets to board the tram that connects Manhattan to Roosevelt Island, eager to meet with a group of artists who reside at Coler Hospital. The Open Doors’ Reality Poets are a collection of vibrant personalities, whose encounters with gun violence have impacted their mobility and changed their lives. The poets use storytelling, hip hop, and spoken word as a means to uncover and reshape their narratives—and the self-described “wheelchair warriors” have a cause in mind: to speak directly to the youth exposed to and embroiled in the violent situations that once mirrored their own.

The Poets’ vision culminates in a program called Open Doors, whose latest project is the publication of an anthology, Wheeling and Healing, that features poetry authored by the Reality Poets, as well as other patients from the Coler facility. The work is an eye-opening observation of the many things people often take for granted, and the many ways trauma seeps into daily reality. The Poets create works that, with the occasional comic twist, highlight the struggles of people who find themselves suddenly not fully physically able. There are also poems that tackle darker topics about the difficulties of requiring a wheelchair for mobility, and on a spiritual note, question the higher powers who allowed them to outlive their incidents.

But there’s also a ubiquitous sense of healing and resilience. The poets share with readers that not only have they learned how to transcend their pain through words, but have also learned about the true meaning and value of family and friendship. 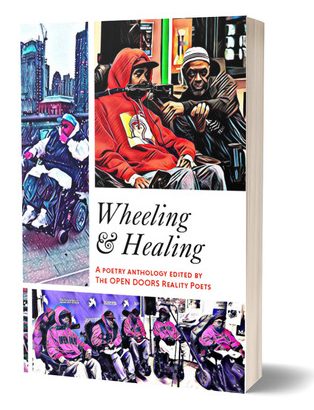 Wheeling and Healing’s official launch event is scheduled for the evening of March 11 at Bowery Poetry Club with Housing Works Bookstore Cafe in collaboration with PEN America’s Prison Writing and Justice Program, and is hosted by Ashley C. Ford. We hope you’ll join us.

In advance of the book release, we spoke with Ramon “Tito” Cruz and Andres “Jay” Molina, two of The Open Doors Reality Poets’ original members, recruited by Project Lead Jennilie Brewster. Tito is a poet and rapper, who uses his experiences with gun violence to reach young people affected by street violence. Jay, also a poet, uses his skills in video producing and editing to depict the stories of the Reality Poets. Their mission is to advocate for safer and more just communities through the framework of their lived experiences.

Dexter Ciprian, Reality Poets’ Communications Lead, describes their unique position as a “middle space,” where people require lifetime treatment as a result of gun violence. Media often focuses on victims of gun violence who either die as a result of their injury, or who have survived and physically recovered. The Reality Poets, by their own definition, fall somewhere in between.

PEN AMERICA: Why do you think the “middle space” often gets ignored?

CRUZ: It’s funny that you say that. One time I went to a show, where they were giving out guns as toys, and in that event, there was a whole bunch of gangsters from LA with masks and all of that, who were talking about guns. And you know most people, they talk about people that died, when it comes to gun violence, and they don’t talk about people who still have to suffer the rest of their life. You are absolutely right, but I guess, this is our program—where we show people the “reality,” and I guess this is what we are trying to do. Right now we are doing community events, but we want to expand. Violence is everywhere right now, in every country. It’s crazy.

PEN AMERICA: Sometimes people see spreading a message of positivity as “corny.” What do you have to say to that?

PEN AMERICA: What lessons have you learned from your incidents, and what advice would you give to the younger generations?

CRUZ: It’s better to be your own man. Reality will knock you back when shit hits the fan. Everybody wants to be in gangs and gangsters until they get caught up and everybody start snitching. Come on. Do your own thing. Don’t be a follower, be a leader. Always engage yourself in activities, so you don’t have to be involved in this. There is nothing on the street, the streets don’t love nobody. They’ll take you for your family, they’ll kill you and give you back to your family. I mean you could get together with a group of friends, but when you involved in negative things, it’s not good.

Now I got friends, they call me, but nobody comes get me to where they used to come get me for. Life is beautiful, you can be whatever you want to be—the sky’s is the limit. But the streets don’t love nobody. In a funeral, people talk about you for a few days, and then life goes on.

CRUZ: Prolly my own crib, still messing with Open Doors. We want to make it big, want to make it a company, and then pass it on, you know. Help give employment to people and help out the community.

MOLINA: We trying to film everything we do. We were in meetings for a year almost. We are working with this guy who helped us, he’s on the advisory board and has a media company. With him, his friend, and myself, we are trying to put a whole video together, documentary. Actually, I have relations with Annie Howard, she put out two movies on Netflix, and she’s working with us on that. I have relations with Miramax studios so gonna put something together and, this is for me personally, I want to get into at least Sundance or the Tribeca Film Festival.

PEN AMERICA: How are you getting women involved artistically?

CRUZ: There’s not too many women we see that were affected by gun violence.

MOLINA: The way we started is more of like this, Jennilie kept coming around and she noticed that all the programs, all the things they had in the nursing home was for older people. The younger people, the rest, used to be hanging out over there, outside. Most of the females that are here, are not in our age range—they are older. Most of the people that are here, you will never see because they are bedbound. Out of 500, you might only see 100 running around. That’s why it’s hard for us to have females. We try.

CRUZ: I’m pretty sure there been females that have [been through] gun violence, but they just not here now. There’s gonna be plays, and it’s gonna be open, so I’m pretty sure in the near future, if someone over here wants to come join the group, then sure, we are open, of course.

MOLINA: It’s hard though. We are mainly about poetry and it’s hard for people to make that jump. For example, when I started working with Jennilie, she started making me write thank you letters or thank you emails . . . of course, I got nice at it. Alright, let’s try writing a poem, and I was like “no, no,” and then I tried, and wrote my first poem. So I made that jump and then I’m like. “Alright, now I can write a poem now.” A lot of people are afraid of that—”oh no, I can’t write.” With the videos, I get that all the time like, “yo, let’s get into the green screen,” and they go, “nah, I look like this, I look like that.” So it’s hard for people to make that jump.

PEN AMERICA: What is your future vision for Open Doors?

CRUZ: We got a video, a rap album coming out, we almost done. We got another Spanish album, we working on that. We got a play coming up, we trying to do our own record label too. We trying to get more artists involved and give a chance to the kids out there, [give them] that playbook, you know. Every kid should come hang out in a safe environment and we can plan a future. It don’t gotta be in the streets doing crazy stuff, you know, it’s a safer future for our kids.

Reality Poets read from their new anthology, from March 11, 2019, at the Bowery Poetry Club RSVP here.

Works of Justice: Kyle Swenson on Justice and Wrongful Incarceration