Why We Need Diverse LGBTQI Books 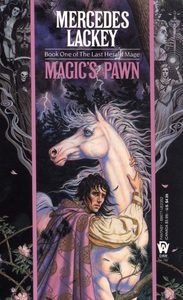 The first gay person I ever met was a character in a book.

It was 1989, and I was living in a Central New York county that had just given George H. W. Bush a solid victory. Most of my middle-school classmates had no idea what HIV was (the term had only been adopted three years earlier), yet they knew that the word “gay” was an insult. For much of my childhood, homosexuality was a taboo subject that no one really took the time to explain. And I never asked; I had no reason to. In my hometown, the closet was full, and it wasn’t as if 1980s network television had any positive gay characters to enlighten me.

Then I came across the work of Mercedes Lackey, who first introduced her iconic gay mage, Vanyel Akshkevron, as a bit of historical background in her debut fantasy novel, Arrow’s Queen. I had no idea when I first picked up Magic’s Pawn — the first book in her follow-up series — that its protagonist was gay, but by the time his sexuality became clear about a third of a way through the book, I didn’t care.

The most important books in life cause seismic shifts in how one views the world, and lay bare one’s own prejudices. Before Magic’s Pawn, I had no idea that I was a little bit homophobic. I had no notion of the gut-wrenching pain and guilt that so many members of the LGBTQI community face.

It’s not an overstatement to say that The Last Herald Mage series, which eventually won a Lambda Literary Award, singlehandedly changed my opinion of who it was acceptable to love. I am eternally grateful that I had access to her book. But what if it hadn’t been on my library’s shelves? Not surprisingly, Lackey’s work has been frequently challenged for its LGBTQI content when it first came out. But that was before Ellen, before Will and Grace, and certainly before gay marriage became legal. Things should be better now, right?

Except they’re not. The challenges continue. Whether it’s Emily Danforth’s luminous Miseducation of Cameron Post being taken off of Delaware’s Blue Hen List, or Tim Federele being disinvited from school visits to discuss his hysterically funny Better Nate Than Ever, LGBTQI literature, while no longer taboo, still rests on uneasy ground in our school libraries.

The tragedy, of course, is that young people are the ones who need these books the most. Studies have shown that 80% of LGBTQI teens have been verbally harassed at school. They’re twice as likely to use drugs as their peers, and are four times as likely to attempt suicide.

Of course, the silencing of LGBTQI literature doesn’t affect only gay or questioning kids who are looking for stories to help them untangle their identities. These books are equally important for straight and cis-gendered teens because stories are our greatest tool to create empathy and combat intolerance.

Most insidiously, these challenges can affect all aspects of the literary world, from self-censoring librarians, to agents and editors who have asked authors to “degay” their characters. When authors shy away from controversial subjects, the world loses, which is why We Need Diverse Books is dedicated to expanding the voices of non-majority narratives.

Like many others, I write for children to reach young minds that haven’t yet been closed off by adult prejudices. But I go into my debut year with the full knowledge that my book (None of the Above, Balzer+Bray 4/28/15), pitched as a YA Middlesex, may be banned for a variety of reasons, but first and foremost because it features an intersex main character. Intersex — formerly known as hermaphroditism — is a taboo subject even to many adults, and I’ve had more than one grown-up ask me, “Will teens really be interested in that?”

I think that they will, and that they are far more open-minded than we adults think. Kids today have grown up watching Modern Family and Glee, and have seen the first transgender woman nominated for an Emmy Award on the cover of TIME. They are our best hope for a future beyond the gender binary where people realize that true love doesn’t care what your chromosomes are.

And perhaps in the future, they’ll be able to say: The first intersex person I ever met was a character in a book.

I. W. Gregorio is a surgeon and writer of young adult books. She is the author of None of the Above, a novel currently under development as a TV series by Lifetime. She is a founding member of We Need Diverse Books, and her writing has appeared in The Washington Post, San Francisco Chronicle, San Jose Chronicle, and Journal of General Internal Medicine. She received her MD at Stanford.