Where the Wild Things Aren’t: On the Banning of Sendak 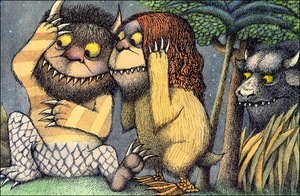 For our second-annual Banned Books Month, PEN America once again reached out to PEN members, supporters, and staff—writers and editors of all backgrounds and genres—who sent us their reflections on the banned books that matter most to them. Today’s piece comes from Rob Spillman, editor of Tin House. To find out more about how you can get involved with Banned Books Month, click here.

“That very night in Max’s room a forest grew and grew and grew until his ceiling hung with vines and the walls became the world all around and an ocean tumbled by with a private boat for Max and he sailed off through the night and day and in and out of weeks and almost over a year to where the wild things are.”

—Where the Wild Things Are

It took Maurice Sendak four years to get Harper & Row to publish Where the Wild Things Are. One of the most beloved—and bestselling—children’s books of all time almost didn’t make it past his editors, who were scared that the unvarnished story of rebellion, fear, punishment, and escape were too much for little children. Silly editors, that’s exactly why it was an immediate hit. In 1964 Where the Wild Things Are won the Caldecott Medal for best picture book, and since its publication has sold nearly twenty million copies worldwide. The editors weren’t off base, though, as the book did frighten people—they just happened to be adults, particularly those living in the South who immediately began pulling it from libraries and schools. Adding his voice to the outcry was prominent child psychologist Bruno Bettelheim, who wrote in Ladies’ Home Journal “What [Sendak] failed to understand is the incredible fear it evokes in the child to be sent to bed without supper, and this by the first and foremost giver of food and security—his mother.”  Luckily for history, there were a lot more reasoned opinions, like this early review from a Cleveland newspaper : “Boys and girls may have to shield their parents from this book. Parents are very easily scared.”

Censorship takes many forms, including on the grounds of religious principles, and, not surprisingly, Wild Things has been “challenged” in schools and libraries because of “witchcraft/supernatural elements.” Don’t laugh—so has Harry Potter, the most challenged book of the last decade according to the American Library Association. Another particularly pernicious flavor of censorship is the “We’re banning this for your own sensitive good” brand, officially labeled as “Unsuited to Age Group.” Yet how many children who are plagued by dark thoughts, including my own moody pre-teen self, have been thrown a lifeline by Sendak? Millions of kids who have seen a fictional kid going a rampage through the house, lashing out at his mother when caught (“I’m going to eat you up!”) and then escaping on a raft of the imagination. Sendak himself was a brooder—a gay, Jewish Brooklynite, who as a young child was traumatized by the Limburgh baby kidnapping, fearing that if horror could happen to the most rich and powerful, there was nothing to protect him from the evils of the world. With his work Sendak acknowledges darkness and fear, and provides an introduction to complicated thinking, the basis for reason and, fundamentally, humanism. The very things that protective censors wish to shield sensitive children from. And for this reason Where the Wild Things is still, after thirty years, being pulled from schools and libraries and worse, shunned by overprotective guardians.

I’m sure there were some who winced when President Obama read the book at the White House Easter Egg Roll and called it one of his favorite books. Sendak himself said that his work is “about human emotion and life.” He didn’t consider himself a kids’ writer: “They’re pigeonholed as children’s books but the best ones aren’t — they’re just books.” Maybe we should trust the kids, not to mention the National Education Association, which lists Where the Wild Things Are as one of the teacher’s top 100 books for children. But it is up to us to protect the wild things and thoughts from those who want to deny them to future generations.