Elizabeth Hawes was awarded second place in Poetry in the 2020 Prison Writing Contest. 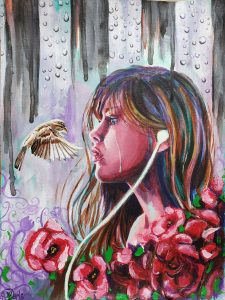 Cat purring, his head-bumping against my chin as we watch the house sparrows splash in their bath in the backyard/raspberry patch, my dad singing Leonard Cohen’s A Bird on a Wire in my mind as I read the Sunday paper Health section-second page: Ginger ale is healthy, A-section bottom left: an antidote for Ebola and the Zika Virus is discovered in the mountains of Peru, A-section page four: Americans attempting traveling to Mexico to escape the arid conditions of the southwest are being turned away at the border because Mexico does not want any more foreigners, Addendum: Stephen Miller had a stroke and to help him recover, was caged somewhere near the Rio Grande, when last seen, a small Latina was poking him with a stick, in other news the Department of Corrections has a policy change and everyone now serves a third of their time on the condition they read /listen to ten classic books and attend ten plays during their last year of incarceration. I turn on the radio to find the Twins are October bound and it’s only August. It starts to rain and rain upon leaves. I hear a Kawasaki ZRX and a strumming of a bass guitar coming from a few houses down and someone speaking Spanish as I turn the page to the Variety, to a review of my most recent play the critics loved except for the turtle racing in the fifth act which no one understands when Dan walks in the front door and tells me that he secretly loves flowers and watching Project Runway too, but he had forgotten to tell me for the last 25 years.

Illustrations by Students at Parsons School of Design

Join @iamdanyeli & talented DREAMing Out Loud writers as they tell their stories, on May 22, part of @PENworldvoices. Sign up below to join them.