What Follows Us Now Must Soon Enough Be Carried 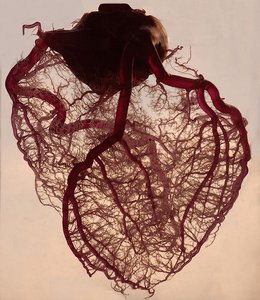 What Follows Us Now Must Soon Enough Be Carried

To read the news of things both splendid
and sad happening far from me today
I had my computer keyboard whisper this coffee shop’s
secret network password — pacific —
and it clicked it was two years
since I had seen the ocean and those I love who live near it.
Like Dean, who could see the Bay from his bed
but is now being kept alive in Texas
by a box of valves and lithium batteries
serving the functions of a human heart.
The last time I saw him our bellies were filled with oysters
and we were drunk in North Beach,
which is where I can imagine Matthew now
walks the hills with an endless twisting distorted
Neil Young guitar solo traveling between
his precision-engineered Chinese-manufactured ear buds.
I don’t know whether Matthew listens to Neil Young,
but I know what it sounds like
when the fog pours around Coit Tower
in the mid afternoon as you step inside a bar
for a Sierra Nevada and a conversation about war or poetry.
Matthew has written many beautiful
and slightly tragic poems about my city,
which he lived in just long enough
to spend trapped in a cast.
I never visited him once and
in fact don’t know where he lived
so I imagine it’s going to be difficult for you
and probably him to believe that I miss him.
But I was a little afraid of Matthew back then,
and maybe still am, as I am often scared of people
who are larger and more amazing than I,
which feels like nearly everyone.
I can’t drink beers at 3 p.m. very often
or anytime soon live in San Francisco
because I am trying to be a decent middle-class father,
which requires living close to adequate schools
and inexpensive consumer packaged goods.
Many of my new best friends
live as far from me as do my old best friends,
like Amanda, who is rehabilitating an artificial steel hip
she selected from a medical supply catalogue
while sitting on her parents’ couch.
Amanda says the hip feels like an ice cream headache
in her leg.
Dean says his box of heart valves feels
like being followed by a cuckoo clock.
That’s all I really know about how strange these things must feel
though I was once chased by time.
It was in Seoul, near Sinchon Station,
where the sound of a second hand followed me and my wife
as we walked with Mrs. Jeong, who had strapped
a little girl who was not yet our daughter onto her back.
She was carrying our future and my daughter’s future
and my daughter’s past and now complete strangers
feel the need to tell me that my daughter is “a lucky girl”
forgetting or unaware that entire shelves of memoirs
have been sarcastically titled Lucky Girl
to awaken us to the horrible things we say
to people who are just trying to be four years old.
According to some of these books
the presence of good fortune is something
one has to decide for oneself,
so today I thought about reaching for it
without knowing what I was exactly supposed to grab,
and I thought of that same afternoon in Seoul,
which my wife and I spent as gentle imposters
in Jogesi Temple. A woman prostrated herself next to us
hundreds of times as a priest struck a gong and chanted things
that felt as if they were about being human but also not
and a small bird flew through the temple
and kept landing on the Buddha’s giant
golden shoulder. When I put my shoes back on
I knew I would spend the rest of my life wondering many new things,
including whether that bird was trapped in the temple
or had been there all along by choice.

Dobby Gibson. “What Follows Us Now Must Soon Enough Be Carried,” from It Becomes You. Copyright © 2013 by Dobby Gibson. Reprinted with the permission of Graywolf Press, Minneapolis, Minnesota, www.graywolfpress.org.