In advance of their PEN Out Loud discussion on November 6 at Symphony Space, we asked author Lindy West (The Witches Are Coming, Hachette Books) and comedian Hari Kondabolu (Netflix’s Warn Your Relatives) about why they’re excited to be in conversation. Don’t miss out! Buy tickets here » 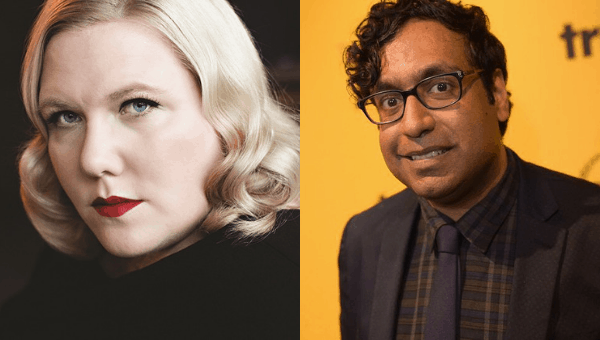 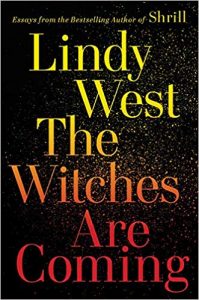 1. What do you want readers to know about your most recent novel, The Witches Are Coming, and any forthcoming work?
For my whole career—at least as long as I’ve been writing about politics and feminism—I always get accused of ‘preaching to the choir.’ And I’m sort of anticipating that criticism for this book. In thinking about that a lot, I feel like: Yeah, the choir is who shows up every week! The choir is who we need to do this work!

I am not under any illusions that—What? Are alt-right dudes on the internet going to read this book and think I changed my mind? Of course not. Who cares [if I am preaching to the choir]? What I want to do with this book is the thing that I think I’m good at that I’ve always felt was a part of my work, which is making people feel less alone in this really, really scary moment and maybe feel a little bit less hopeless, feel a little bit more empowered, and recognize that, particularly collectively, we do still have a lot of power! Even though everything is really scary and really confusing and very grim—Man, there’s a lot of us! It’s a tactic! This feeling of hopelessness and despair that we feel is a tactic that is being deployed against us.

My hope with this book was to remind people of their inherent power, especially their collective power, make people feel less alone, and remind people of the importance of remembering what’s true, what’s real, and what’s not. Because that’s another tactic—this administration desperately trying to divorce all of us from reality. I think that’s also at the heart of the book: The idea that we have to tell the truth. Not just about the present, but about the past and about who we are and what we’re doing.

2. What was the last book you read? What are you reading next?
What I am constantly doing for my mental health is listening to fantasy YA novels on audiobook. I’m almost done with Shadow and Bone. I’m 58 minutes from the end. I can’t wait to read the next one. I’m constantly listening to a fantasy novel because it calms me. I love it! There’s something so nice about it. I know I just spent half an hour and also wrote an entire book urging people not to escape from reality but instead to engage with it, but, I enjoy escaping from reality.

It can be easy to get lost in your own ideas, and it is really, really important—especially right now—[for writers] to be contextualizing themselves. We’re learning that you can’t just assume that you know everything and that you’re right about everything. That’s a really dangerous place to be. Especially white people. Especially white writers. White people silo themselves/ourselves (obviously, I’m white) in really dangerous ways. The assumption that you already understand everything—that’s a white disease.

As much as I rail in this book against the idea that we constantly need to be debating—I’m talking about bad-face debating—I do think that we need to constantly be in good-face conversation with people who actually want to be permeable and flexible and be learning about their world and other peoples’ perspectives. As a writer, it is your job to digest the world and maybe present it in a new way or present a new perspective. I think in certain ways, writers are uniquely suited to have those kinds of public conversations that maybe guide or inspire other people’s conversations. I spend all of my time looking at the news thinking, ‘What’s not being said? What big ideas are people missing here? What misconceptions are being perpetrated here?’ It is important for everyone to be talking and thinking critically about themselves, their community, and their world. Writers as much as anyone, if not more so.

4. What do you admire about Hari Kondabolu’s work as a poet and artist? What are you looking forward to speaking with Hari about in November?
I’ve known Hari forever. I’m from Seattle. Hari’s from Queens. He went to college with a guy from Seattle that I peripherally knew growing up who was close with a lot of my good friends from high school. So, after college, for whatever reason, Hari decided to move back to Seattle with his college roommate who was in my greater circle of friends. I think we met when we were 22, and he moved in with a bunch of my high school friends in one of those houses that you live in when you’re 22.

I started going to comedy all the time in Seattle because, well, I love comedy, but we would all go see Hari. He eventually became writing partners with the guy who is now my husband. So, I didn’t exactly meet my husband through Hari, but we all met at the same time, hanging at the comedy clubs. They’ve had a really long creative partnership and [he’s] just a really dear and really, really special person to me. We’ve always been there [for one another], and it’s been fun to be there for each other’s success. How cool it is that I get to launch my book with Hari? Now that you say it, it shifts from, “Oh, me and Hari are doing this event” to “Hari’s gonna be there for my book launch.” It is really nice! 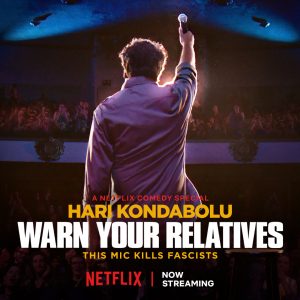 1. What do you want audience members to know about your Netflix special Warn Your Relatives and your stand-up comedy?
My Netflix special Warn Your Relatives is a very good sample of what I do well: Talk about power dynamics and oppression with as many jokes as possible. I’m very proud of what I do and of my special. It’s funny and thoughtful and relevant…and they should watch it…REPEATEDLY.

2. What was the last book you read? What are you reading next?
I last read the PEN America literary award winning Friday Black by Nana Kwame Adjei-Brenyah. I always find my way back to Kurt Vonnegut when I need some inspiration and may very well find my way to him again soon. Also, I’ve been staring at a copy of The Prophet by Kahlil Gibran for a few days that I want to crack open sooner than later.

3. Why do you think it is valuable for writers to be in conversation with each other about their work and current events through series like PEN Out Loud?
Artists have an understanding about creating work that others might not. We know what it’s like to constantly collect our thoughts, be obsessed with an idea, take it through the various stages of development and then put it on display for the public to judge. When you are talking to other people who think critically and try to filter their observations of the world through art, it leads to a conversation full of observations that might not have been made otherwise. You also get deeper insight into the process of creating art.

4. What do you admire about Lindy West’s work as a writer? What are you looking forward to speaking with Lindy about in November?
Lindy West is an incredibly funny writer. This is something that gets overlooked way too often because of the righteousness of her points of view. Yes, she is astute and compassionate and able to draw light to various injustices in the world. She is also a current master in the craft of humor writing and she should be praised for this.

5. What does PEN America’s work defending freedom of expression mean to you?
As someone whose life and career is built on free expression, I am incredibly grateful PEN America does the work that it does to defend it. I aim to make critical art that punches upward and questions the status quo. This is always the type of art that gets banned or marginalized when you are dealing with totalitarian regimes. Now, perhaps more than ever, we need this kind of art in the world and must do whatever we can to protect it.

The Witches Are Coming: A PEN Out Loud Reading List