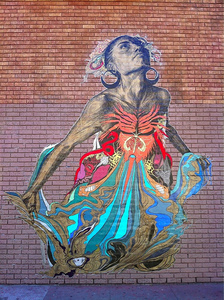 This week in the Guernica/PEN Flash Series, we feature a piece by Payam Feili, an Iranian poet living in exile in Turkey. Feili’s first book, The Sun’s Platform, was heavily censored by Iran’s Ministry of Culture and Islamic Guidance and his subsequent work outright banned from publication in Iran.

Subscribe to the Series and get fresh new stories delivered to your inbox twice a month—no spam or news, just stories.

I have no name. My mother went to the seas before she could call me by a name. To the seas … to a bed of seaweed … in the remains of an old ship. Poker and the Afghan Groundskeeper have not picked a name for me either.

Poker says, “It is better this way.”

The Afghan Groundskeeper says, “When the Queen’s name rises from the forests of the Mediterranean, you will have a name.”

Akhenaten says, “There is no name for you.”

Without a name and without a smile, I walk along the seashore. Here and there, silverpatches of light glow on the sand around the wharf. I think about my mother. About her wet nakedness in the water. About the kingfish who drink milk from her breasts and the mermaids who softly brush against her skin.

I can recognize her footprints on the sand. She has again come to town without coming to see me.

My mother is the goddess of the seas. My fetus still floats in her womb. Perhaps I am a goddess, too. My mother guides the waves and the whirlpools. She guides theships to shore … the fogs to the sky.

I guide night-prowling strangers to my bed …

Grains of sand slither under my feet. I turn and walk towards the sea. I grow closer … closer … one step … two steps … I walk on water.

I learned this from my mother.

I see a pack of gypsies in the distance. They are singing and walking on water.

My mother learned to walk on water from them.

They fade in the orange background. I wave to them … they disappear.