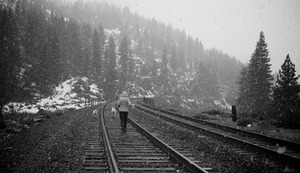 It’s four in the morning.
I’m ten years old.
I’m beating my mother between the mirror and the shoe rack.
The front door is ajar. A bridge
presses its finger to the frozen strip of water.
Snow falls over it gritting like sand on glass.
Both of us in our long night robes.

I stare into her earring hole and aim
at her large breasts not to hurt my knuckles.
I slap her face like I flip through channels.

My father lies at the door. From his shirt
lipstick smiles at me with the warmth of urine.
It’s as if somebody threw at him slices
of skinned grapefruit.
Every time she hits him—I hit her.
Look at this. Look whom you’ve bred.

How can he see from under his pink vomit.
But his body smiles—
cannot stop smiling.

on a bare tree—a red beast,
so still it has become the tree.
now it’s the tree that prowls over the beast,
a cautious beast itself.

a stone thrown at its breast is
so fast—the stone has become the beast.
now it’s the beast that throws itself like a stone.
blood like a dog-rose tree on a windy day,
and the moon is trying on your face
for the annual masquerade of the dead.

A woman’s hallelujah! washes the foot of the Mockingbird
Hill, her face eclipsed by her black mouth,
her eyes rolled up like workman’s sleeves.
Stirred up, a fly speaks in the tongue of the hotel
doorbell, where, on the sun-ridden straw terrace
my salvation means less than praise
to a dumb child. Damned, blinded by ice cubes,
the fly surrenders its life into the waiter’s clean hands.

Behind the kitchen of the Mockingbird Hotel
a rooster repeats hallelujah! until it loses its head.
A man harvests the Family Tree before his forefathers’
features have a chance to ripen on their faces. Parakeets
watch him from the bare nerves of the garden. He harvests
before the worms that eat his father turn into demons.

Do not eat the fruit from your Family Tree. You have
eyes not to see them, hands not to pick them, teeth
not to bite them, tongue not taste them even in speech.
The waiter slashes the table with our bill. We descend
the Mockingbird Hill without raising dust. Dogs,
whose fur hangs like wet feather off their backs,
piss yellow smoke without lifting a leg. Gulls
smash their heads between their wings. Light
lays the eggs of shadows under the shrubs.
Produce shacks stand empty like football gates.
What appeared blue from afar, turns green.
I hold it all in, even my own urine.
But the mother of vowels slumps from my throat
like the queen of a havocked beehive.

Higher than hallelujah! rising like smoke over the hill,
I scream at the top of that green lung,
why, in the Mockingbird
Hell, do you value your blood over your sweat,
that bitterness over this salt, that wound over this
crystal? But often, to shed light on the darkness, light
isn’t enough. Often what I need is even a darker
darkness. Like in those hours before the sun faults this
hotel, his two nostrils that illuminate our benighted bodies.