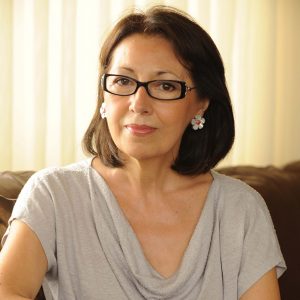 Marie Arana is a Peruvian-American author of nonfiction and fiction, senior advisor to two U.S. Librarians of Congress, the inaugural literary director of the Library of Congress, The John W. Kluge Center’s former Chair in Countries and Cultures of the South, and a writer-at-large for The Washington Post. For many years, she was editor-in-chief of The Washington Post’s literary section, Book World. As books editor of the Post, she was instrumental in establishing the National Book Festival in 2001, and she has been the festival’s literary director for many years since.

Her memoir American Chica (2001) was a finalist for the National Book Award as well as for the PEN/Martha Albrand Award for the Art of the Memoir; her novel Cellophane was a finalist for the John Sargent, Sr. First Novel Prize in 2007; and her biography of the Latin American liberator Simón Bolívar won the 2014 Los Angeles Times Book Prize. In 2019, the American Library Association named her sweeping history of Latin America, Silver, Sword, and Stone, the top nonfiction book of the year. In 2019, the American Writers Museum conferred on Arana the inaugural Friend of the Writer award. A year later, she received an award for her lifetime work in literature from the American Academy of Arts and Letters. In 2021, Librarian of Congress Carla Hayden bestowed on her the Library of Congress Award for Superior Service.