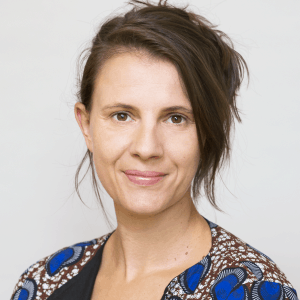 Julie Trébault is the director of PEN America’s Artists at Risk Connection project. A highly respected leader in the art world, she brings skills, experience, and a network to launch a new support system for artists at risk worldwide. Prior to joining PEN America, she served as director of public programs at the Museum of the City of New York, where she built a robust roster of panel discussions, performances, screenings, and symposia spanning New York City’s arts, culture, and history. She previously was director of public programs at the Center for Architecture. Before moving to New York, she worked at the National Museum of Ethnology in The Netherlands, where she built a network of 116 museums across the globe that shared a virtual collection of masterpieces and developed an innovative array of online and mobile applications and exhibitions to make the collection as widely accessible as possible. From 2004 until 2007, she was Head of Higher Education and Academic Events at the Musée du quai Branly (Paris), where she conceived and implemented a policy for higher education by creating an international network of universities, graduate schools, and research institutes. Trébault holds a Master’s Degree in Arts Administration from the Sorbonne University, a Master’s Degree in Archeology from the University of Strasbourg, and teaches at Fordham University.

Don't miss Black academics @profblmkelley, @pornoscholar, and @daniellepurifoy discuss the growing movement against the teaching of black history & racism as part of our #BannedBooksWeek conversation with @rofhiwabooks on 10/1! Register here: https://bit.ly/3nYQjVj.

PEN America & @LIVEfromNYPL are thrilled to have Wole Soyinka join us for #PENOutLoud to discuss his first novel in nearly half a century. Check out this Q&A the author had with @Guardian & register for our FREE talk on 10/7 here: https://bit.ly/2YPzZvj. https://bit.ly/3m1jHra

Proudly carry your banned books in our limited-edition #BannedBooksWeek tote bag! Every bag will go towards supporting PEN America's work advocating for authors, educators, and the freedom to learn: https://bit.ly/3nUYmlQ.