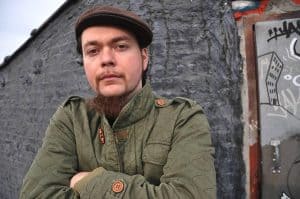 BABA ISRAEL is an artist, producer, educator and consultant raised in New York by parents who were core members of the Living Theatre. He was Artistic Director of Contact Theatre in Manchester where he developed several festivals and productions.  He was a resident artist at BRIC creating his last multimedia performance The Spinning Wheel in collaboration with London based company Unfinished Business. He is a core member of Hip Hop/Soul project Soul Inscribed who recently completed the American Music Abroad program. He holds an MFA in Interdisciplinary Arts from Goddard College and is the Co-Artistic Director of the Performance Project based at the University Settlement. He is a proud member of HERE’s HARP program.

His debut solo show Boom Bap Meditations was supported by the Ford Foundation and the Hip Hop Theatre festival. He has toured across Asia, Africa, Europe, the South Pacific, North and South America as a Hip Hop and theatre artist and led cultural ambassador programs internationally supported by the US State Department.

As an educator, he is a consultant with BAM’s education department, City Lore,  and with Open Thought Productions leads residencies and assembly programs in theaters and schools.