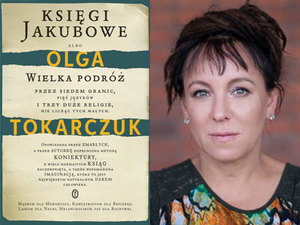 Jennifer Croft is the recipient of a 2015 PEN/Heim Translation Fund Grant for her translation of The Books of Jacob by Olga Tokarczuk, which was awarded the 2015 Nike Literature Award, Poland’s highest literary honor. Read an excerpt of the translation here.

In the best-selling and critically acclaimed novel The Books of Jacob (2014), the fascinating story of Jacob Frank permits Polish writer Olga Tokarczuk to grapple with questions both metaphysical and quotidian, and in so doing shed light on important but often overlooked issues in the development of Polish–Jewish relations, which themselves bring to bear on a number of core problems facing Europe and the world today. The urgency of these issues is nowhere clearer than in the recent barrage of hate mail addressed to Tokarczuk, absolutely unprecedented in her career, accusing the author of lying and betraying her country by allying herself with Jews. Disgusting misogynist and anti-Semitic insults across various online platforms have now escalated into calls for Tokarczuk’s expulsion from Poland and even incitements of violent attacks at upcoming readings. The shocking reaction of these Polish extremists seems to have been occasioned by comments Tokarczuk made in a TV interview following her Nike Prize win forThe Books of Jacob in early October 2015, in which she questioned the historial narrative that Poland was an open, tolerant country, and highlighted the suppression of minority groups, including Jews.

In the summer of 1759, Jacob Frank engineered the conversion of thousands of Jews to Catholicism in Lwów (now Lviv, Ukraine). Eyewitness testimony from that year depicts Frank as “beautiful, of imposing posture and resounding voice,” which surely he must have been, to hold such sway over so many. Yet according to another contemporary, Frank was a small man, “incredibly ugly, not resembling a human being, with the face of a demon.” Was this merely an embittered outsider, a person secretly desirous of the purification and universal forgiveness Frank promised his followers? Or were both descriptions accurate? Was Frank in fact Janus-faced enough to inspire opposite reactions in those with whom he came into contact?

Another contemporary source claimed that Frank was fluent in Hebrew, Turkish, Wallachian, Italian, German, and Ladino. A conflicting report suggests “Frank had no command at all of any language or speech whatsoever but stammered, whistled, and cried like a rooster so that anyone who was not well-accustomed to him could not understand anything.”

On February 6, 1760, Jacob Frank was arrested on charges of heresy. Convicted, he was imprisoned in the ancient Polish monastery of Częstochowa, where he remained for 13 years. This twist of fate was the result of meticulous maneuvering by political and religious authorities and the perhaps inevitable—albeit belated—outcome of Frank’s unique interpretation of the Torah.

No one is better suited to delve into this longstanding controversy than Olga Tokarczuk. Trained as a psychologist before turning to fiction, Tokarczuk is especially known for her astute and thorough explorations of her characters’ psyches, as well as her ability to disentangle the threads of the delicate fabrics of communities, revealing and reweaving the richness of relationships of many kinds. She is also known for the lyrical grace and the poise of her prose.

The Books of Jacob is a groundbreaking contribution to Polish literature that rewrites history to both celebrate and problematize diversity of faith, gender, language, and nation, while also functioning perfectly as an exciting and evocative work of fiction. “Words are like lizards,” writes Tokarczuk, “able to elude all containment” (p. 418). There is indeed something so alive about The Books of Jacob that it seems consistently to escape the page.

My task—so helpfully supported by the PEN/Heim Translation Fund—is to invoke a similar slipperiness in English by constructing an English text that is as heterogeneous (and well-researched) as it is nimble and lithe, and in so doing, to do as much justice to Tokarczuk as she has done to Jacob Frank, to the men who revered and hated him, the women who slept with him, the women who reviled and admired him, and one woman who was able to truly see him for what he was.

Let us hope that the dissemination of this brilliant work—truly Tokarczuk’s magnum opus—in multiple languages will also work to lessen the lingering ignorance of intolerant pockets of Poland and the world.

Jennifer Croft is the recipient of Fulbright, PEN, and National Endowment for the Arts grants, as well as the Michael Henry Heim Prize, and her translations from Polish, Spanish, and Ukrainian have appeared in The New York Times, n+1, Electric Literature, BOMB, The New Republic and elsewhere. She holds a PhD from Northwestern University and an MFA from the University of Iowa. She is a founding editor of The Buenos Aires Review.

The Books of Jacob is available for publication. Publishers and editors who wish to express interest in this project are invited to contact PEN Literary Awards Coordinator Arielle Anema (arielle@pen.org) or Translation Fund Advisory Board Chair Michael F. Moore (michaelfmoore@gmail.com) for the translator’s contact information.