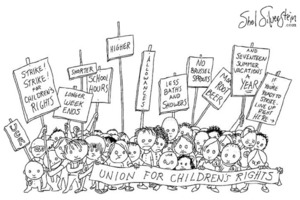 Warning: What you are about to read contains profanity, vile, morbid, and anti-parent material, suggestive illustrations, subliminal messages that glorify Satan, suicide, cannibalism, disrespect for truth and legitimate authority, and celebrates the occult. Also be warned that there are no penises named Ralph in this post, no gay penguins, no bondage, rape, or incest, no racial slurs, and no wizards or vampires.

So, what is there? Poetry—children’s poetry by the author of beloved children’s books The Giving Tree, The Missing Piece, and A Light in the Attic, the collection of poems and illustrations that for close to two decades topped the American Library Association’s list of most frequently challenged books.

Published in 1981, Shel Silverstein’s A Light in the Attic was the first children’s book to make The New York Times’ bestseller list, where it stayed for record-breaking 182 weeks. Through silly caricatures and sophisticated wordplay, Silverstein dared adults and children to confront with humor everyday issues like greed, shame, chores no one wants to do, homework, line-jumpers, and cannibalistic aunt eaters. Tethered to the ridiculous, the poems are grounded to a fundamental moral code that encourages generosity and self-exploration. In my own family, both as child and parent, Silverstein’s poems brokered common ground between the adult and adolescent worlds, where parents and children could find humor in universal human faults and inspiration in the silly. As a child, and as a horrible reader, I read Silverstein’s poems out loud with my stepfather to help me overcome severe in-class reading anxiety. We spent my reading time laughing, playing, and memorizing our favorite lines—exactly what I do with my own kids.

A staff cartoonist for Playboy Magazine, Silverstein began writing children’s books in the 1960s. From The Giving Tree to Falling Up, his style was laid back and conversational with accompanying illustrations that while vibrating with life, verge on the absurd; and I suppose that’s the rub—while it seems almost universally true that kids understand the absurdity, parents often don’t. When I opened the case file from the American Library Association’s Office for Intellectual Freedom documenting challenges brought against Silverstein’s book, it read like a well-crafted comedy of errors.

The poem “Little Abigail and the Beautiful Pony,” which my kids love to recite, was banned from second grade classes in Huffman, Texas because a mother protested that it “exposes children to the horrors of suicide.” Horrors of suicide?

And Abigail began to cry and said,
“If I don’t get that pony I’ll die.”
And her parents said, “You won’t die.
No child ever died yet from not getting a pony.”
And Abigail felt so bad
That when she got home she went to bed,
And she couldn’t eat,
And she couldn’t sleep,
And her heart was broken,
And she DID die—
All because of a pony
That her parents wouldn’t buy.

Big Bend Elementary School library in Mukwonago, Wisconsin banned the book because it contained poems that “glorified Satan, suicide, and cannibalism.” They must have been referring to “Ladies First.”

Pamela Purse Screamed, “Ladies first,”
When we went off on our jungle trip.
Pamela Purse said her thirst was worse
And guzzled our water, every sip.
And when we got grabbed by that wild savage band,
Who tied us together and made us all stand
In a long line in front of the King of the land—
A cannibal known as Fry-‘Em-Up Dan,
Who sat on this throne in bib so grand
With a lick on his lips and a fork in his hand,
As he tried to decide who’d be first in the pan—
From the back of the line, in that shrill voice of hers,
Pamela Purse yelled, “Ladies first.”

From Socrates to Satanic Verses, it’s no secret that written works have been banned, burned, and censored at the whim of dictators and the masses alike. Expression sometimes comes with a heavy price; poet Liu Xiaobo is serving an 11-year sentence in China for writing seven sentences. A common thread running through all forms of censorship is almost always fear—fear that new or different ideas pose a dangerous threat to established norms and authority. In the United States, a country where freedom of expression is guaranteed by the Constitution, book challenges originate from a different kind of authoritarian regime: the localized tyranny of the well-intentioned parent, a group, who, according to the American Library Association, are responsible for more book challenges than all other groups combined.

As with past Banned Books Celebrations, we set out to expose those tyrannies by exploring, through written pieces and live events with banned authors, the cultural value, literary merits, and controversial ideas behind the books most frequently challenged. Where the Wild Things Are, The Absolutely True Diary of a Part-Time Indian, Huck Finn—for each of the books in the series, writers presented just as many thoughtful arguments in their defense as there are challenges. And as wonderful as all our pieces and events were, they were slightly overshadowed by real-time book banning in Randolph Country, North Carolina, where after a parental complaint, the school board voted unanimously to remove Ralph Ellison’s Invisible Man from school libraries. The main players dutifully played their roles, making broad and ill-informed statements about the literary merit, or lack thereof—of one of the country’s most celebrated literary works of the twentieth century. Students, librarians, journalists, and concerned community members stood up and spoke out, and in a week, the ban was rescinded in a 6-1 vote.

In a letter sent to the Randoph School Board, Barbara Jones of the ALA wrote:

Given the diverse constituencies all schools serve, school libraries should represent a broad range of views in their collections and to meet the needs of everyone in the communities they serve – not just the most vocal, the most powerful, or even the majority. While parents and community members may rightfully voice their concerns and select different materials for themselves and their children, those objecting to particular books should not be given the power to restrict other users’ rights of access to the material.

The letter goes on:

By allowing students the ability to choose, you can send a powerful message… that, in this country, they have the right to read what they choose and the responsibility to think critically about what they read, rather than allowing others to think for them.

One of the Board Members who voted for the original ban and later voted to rescind it, choked back tears talking about how his son had been in combat overseas “fighting for those freedoms that I’m here passing a vote to take away.” He went on to ask, “Is that right of me? No.’’ A courageous act of admission shared by almost all board members that shows there is rarely malicious intent in these cases, just hasty decisions made without understanding the broader implications.

I chose Shel Silverstein’s A Light in the Attic as the final piece of this year’s series because at its core is a wild call for intense self-examination and creative engagement with the world—the kind that encourages kids to take a stab at being the next Silverstein or Ellison or Morrison. And while the book doesn’t carry the literary or cultural weight of a work like Invisible Man, it strikes at the heart of what tyrants fear most: an impressionable challenge to think differently and to create something new.

Draw a crazy picture,
Write a nutty poem
Sing a mumble-gumble song,
Whistle through your comb.
Do a Loony-goony dance
‘Cross the kitchen floor,
Put something silly in the world
That ain’t been there before.

And what could be more threatening than that?