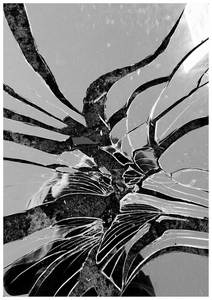 Whatever lies still uncarried from the abyss within
me as I die dies with me.

We fill pre-existing forms and when we fill them we change them and are changed.

The desolating landscape in Borges’ “Borges and I” —in which the voice of “I” tells us that its other self, Borges, is the self who makes literature, who in the process of making literature falsifies and exaggerates, while the self that is speaking to us now must go on living so that Borges may continue to fashion literature—is seductive and even oddly comforting, but, I think, false.

The voice of this “I” asserts a disparity between its essential self and its worldly second self, the self who seeks embodiment through making things, through work, who in making takes on something false, inessential, inauthentic.

The voice of this “I” tells us that Spinoza understood that everything wishes to continue in its own being, a stone wishes to be a stone eternally, that all “I” wishes is to remain unchanged, itself.

With its lonely emblematic title, “Borges and I” seems to be offered as a paradigm for the life of consciousness, the life of knowing and making, the life of the writer.

The notion that Frank has a self that has remained the same and that knows what it would be if its writing self did not exist—like all assertions about the systems that hold sway beneath the moon, the opposite of this seems to me to be true, as true.

When Borges’ “I” confesses that Borges falsifies and exaggerates it seems to do so to cast aside falsity and exaggeration, to attain an entire candor unobtainable by Borges.

This “I” therefore allows us to enter an inaccessible magic space, a hitherto inarticulate space of intimacy and honesty earlier denied us, where voice, for the first time, has replaced silence.

—Sweet fiction, in which bravado and despair beckon from a cold panache, in which the protected essential self suffers flashes of its existence to be immortalized by a writing self that is incapable of performing its actions without mixing our essence with what is false.

Frank had the illusion, when he talked to himself in the cliches he used when he talked to himself, that when he made his poems he was changed in making them, that arriving at the order the poem suddenly arrived at out of the chaos of the materials the poem let enter itself out of the chaos of life, consciousness then, only then, could know itself, Sherlock Holmes was somebody or something before cracking its first case but not Sherlock Holmes, act is the cracked mirror not only of motive but self, no other way, tiny mirror that fails to focus in small the whole of the great room.

But Frank had the illusion that his poems also had cruelly replaced his past, that finally they were all he knew of it though he knew they were not, everything else was shards refusing to make a pattern and in any case he had written about his mother and father until the poems saw as much as he saw and saw more and he only saw what he saw in the act of making them.

He had never had a self that wished to continue in its own being, survival meant ceasing to be what its being was.

Frank had the illusion that though the universe of one of his poems seemed so close to what seemed his own universe at the second of writing it that he wasn’t sure how they differed even though the paraphernalia often differed, after he had written it its universe was never exactly his universe, and so, soon, it disgusted him a little, the mirror was dirty and cracked.

Secretly he was glad it was dirty and cracked, because after he had made a big order, a book, only when he had come to despise it a little, only after he had at last given up the illusion that this was what was, only then could he write more.

He felt terror at the prospect of becoming again the person who could find or see or make no mirror, for even Olivier, trying to trap the beast who had killed his father, when he suavely told Frank as Frank listened to the phonograph long afternoons lying on the bed as a kid, when Olivier told him what art must be, even Olivier insisted that art is a mirror held up by an artist who himself needs to see something, held up before a nature that recoils before it.

We fill pre-existing forms and when we fill them we change them and are changed.

Everything in art is a formal question, so he tried to do it in prose with much blank white space.