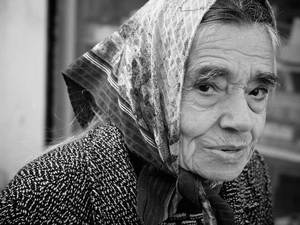 These pieces were submitted by Nancy Kricorian as part of the 2015 PEN World Voices Online Anthology.

My grandmother is in heaven. This heaven has no Turks, no women in skimpy bathing suits, no squirrels in the pear trees. Her mansion is very clean and there are plastic covers on the furniture. In the morning she combs out her long hair and puts on a blue-flowered dress. Jesus stops by for coffee and cheoregs. She claps her hands when she sees the fuchsia he has brought her. Grandma and Jesus sit in the kitchen and talk about plans for the new Armenian Cultural Center. They look at old photo albums and the day passes quickly. When it is suppertime, Jesus goes back to his place next door. Knowing it will soon be dark in Watertown, my grandmother rings the bell for the angel. She gives the angel a Three Musketeers bar for the trip. Just before I fall asleep, I hear the rustle of the candy wrapper behind my headboard.

Have you heard a thrush sing while its nest burns in the wind?

Listen. In the morning you can hear the bright strike of hammers and the rasp of saws. Children carry sand from the riverbanks in their school satchels. First they build the church, then the school, and finally a house for each family according to its means. The tents and shacks are taken down one by one. Each family plants a mulberry tree and tends its garden.

The remnants of Marash create a new Marash. And so also Nor Sis, Nor Adana, Nor Giligia, and Nor Hadjin are made. You can hear the sounds of the trades learned in the orphanage workshops: carpenter’s plane, sewing machine and cobbler’s bench. The sharp smell of the tannery is in the air and in their clothes. All Beirut wears their shoes.

Look at the children outside the church in their freshly pressed clothes, and the girls have ribbons in their hair. Look at the food spread on the luncheon table and the hands that pass the platters. Someone has told a joke and there is laughter. Someone pulls an instrument from its case.

Speak of those times, or don’t, when the parties take up arms against each other. How the women of one church throw boiling water out the window on the men with guns. When all Beirut stops fighting, for how many more weeks do the Armenian men continue to shed each other’s blood?

Speak then of the flowering: the neighborhood children grow tall. Among them are musicians, actors, painters and poets. In this world their parents have rebuilt from ashes, they now believe anything is possible, and everything is new.

Remember this: when the Civil War comes, neutrality is no amulet against the bullets and the bombs. Jewelers flee the downtown souk for Bourj Hammoud, where the militiamen patrol the night and then also the day. So many boats leave the port. Carrying leather suitcases to the airports, so many are exiled again.

Remember Nor Adana, Nor Marash, Nor Sis. Men still play backgammon and grill meat on braziers on the sidewalk. Remember the narrow alleys and wooden houses of Sanjak Camp, razed for a shopping plaza. Oh people of long memory, listen, look, speak, remember: your stories are a homeland.