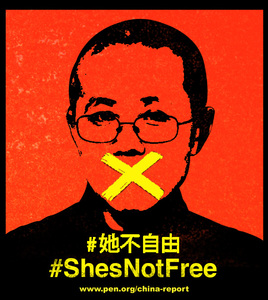 Are you on Twitter? You can make a difference. Add the hashtag #shesnotfree to call for the release of Chinese artist and poet Liu Xia from house arrest.

If you want to do more, take action now by writing an e-letter to the Chinese authorities in support of Liu Xia.

#ShesNotFree is inspired by Liu Xia, the wife of jailed former Independent Chinese PEN Center President and 2010 Nobel Peace Prize Laureate Liu Xiaobo. Held for over two years under house arrest without phone or Internet, Liu Xia left home last week to attend her brother’s trial for fraud. Leaving the courthouse, she shouted out her car window: “I am not free. If they tell you I’m free, tell them I’m not free.”

The launch of #ShesNotFree at the PEN American Center Literary Gala set the stage for the release of PEN’s groundbreaking report, The PEN Report: Creativity and Constraint in Today’s China, on Friday, May 3, World Press Freedom Day. The report documents an escalating crackdown on writers and activists since 2008. It also charts the pressure from below mounted by a brave citizenry that is increasingly determined to break through China’s vast firewall. It includes 10 essays by leading writers and dissidents from China including Liao Yiwu, Murong, Teng Biao, and Gao Yu and recommendations to China’s new president, Xi Jinping. The report will be downloadable starting on Friday at pen.org/china-report.

This Twitter campaign marks a first for PEN’s advocacy of those targeted and jailed because of what they write. The goal of this digital campaign is to raise awareness about the constraints on free expression in China and the punishments endured by writers who defy censors and challenge the system. The #ShesNotFree campaign will spread through PEN’s global community of more than 20,000 leading writers in more than 100 countries. It includes an image that is intended to #JumpTheFirewall and be shared on China’s microblog platforms.

Join us on 2/8 for a #PENOutLoud conversation between @sonofbaldwin & @AskMateo as we'll be celebrating the paperback launch of THE PROPHETS - one of the 10 most notable LGBTQ books of 2021 according to NBC News! Tickets: https://bit.ly/3HXt2ts. https://nbcnews.to/3nMskHW

From a Big Tech crackdown to the rebirth of local news, 16 future-minded thinkers predict where journalism will be in 15 years for @politico. PEN America CEO @SuzanneNossel weighs in on the dangers of not investing in media literacy: https://www.politico.com/news/magazine/2022/01/21/media-journalism-future-527294?mc_cid=fd130f603c&mc_eid=fbfdc38749