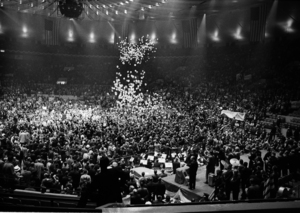 This week in the PEN Poetry Series, PEN America features a poem by Molly Brodak.

The fire itself has no scent.
A little fire in the street
is no particular person’s baby. The walk home
now is always amid crashes
and incidents. The rain is intermittent.

The gall, the dread,
I can’t see it in the street,
in the waiting lines,
in the stairwell
of my complex.

Only the rat’s head is left in the trap.
Each lamp spreads a skirt of light,
none touch.

Some have no lamp.

A pest, a homeless shred
of cells and bones begs and moves
his candle to the darkest sleepers,

so low, almost not, but singing,

and up here I cannot blink the fire out of my eyes,
I mean not the glittering fire itself,
not the fire but its burned things, and I can’t hear
his song but I see his candle moving through the dark.