PEN America—along with the wider literary community—mourns the death of Nobel laureate and long-time PEN America Member Toni Morrison. Among her many accolades, she was PEN America’s 2008 PEN Literary Service Award winner, and in 2016, we honored her with the PEN/Saul Bellow Award for Achievement in American Fiction. 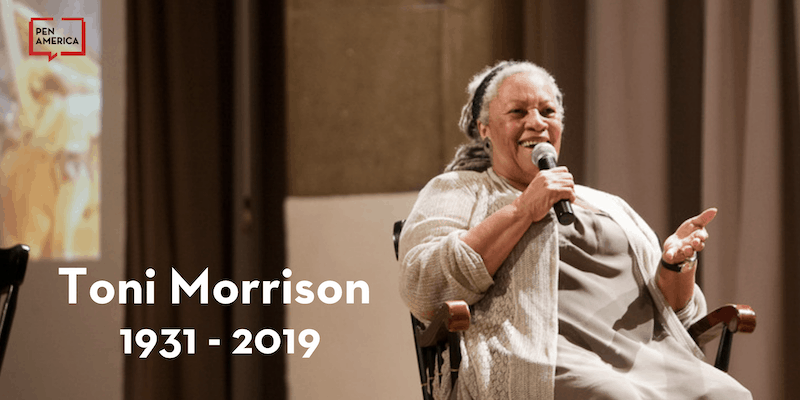 “Her unmatched ability to use story to kindle empathy and rouse the imaginations of millions to contemplate lived experiences other than their own has transformed our culture,” said PEN America CEO Suzanne Nossel. “Her faithfulness to fellow writers and the cause of literature was unparalleled. To have her voice silenced at this moment is an almost unbearable loss. Our society would do well to recall her maxim just now, ‘If there is a book that you want to read, but it hasn’t been written yet, you must be the one to write it.’”


Watch Morrison’s remarks at our 2016 tribute to her.

“The historical suppression of writers is the earliest harbinger of the steady, peeling away of subsequent rights and liberties that will follow,” Morrison said. “The history of persecuted writers is as long as the history of literature itself, and the efforts to censor, starve, regulate, and annihilate us are clear signs that something important is taking place.”


Watch Morrison’s entire remarks on freedom of expression and the role of the writer from 2008.


In addition to her work as a writer, Morrison was also a teacher, editor, and mentor. In 2014, she told NEA Arts Magazine about writing guidance she once gave her students.

“When I taught creative writing at Princeton, [my students] had been told all of their lives to write what they knew. I always began the course by saying, ‘Don’t pay any attention to that.’ First, because you don’t know anything and second, because I don’t want to hear about your true love and your mama and your papa and your friends,” she said. “Think of somebody you don’t know. What about a Mexican waitress in the Rio Grande who can barely speak English? Or what about a Grande Madame in Paris? Things way outside their camp. Imagine it, create it. Don’t record and editorialize on some event that you’ve already lived through. I was always amazed at how effective that was. They were always out of the box when they were given license to imagine something wholly outside their existence. I thought it was a good training for them. Even if they ended up just writing an autobiography, at least they could relate to themselves as strangers.”

Our hearts are heavy today with the news of the death of #ToniMorrison, a writer who bent the arc of American literature toward a deeper and truer understanding of ourselves. We need her guidance now more than ever. #RIPToniMorrison @PENAmerica https://t.co/kA5khaOBKV

“Toni Morrison’s work exemplifies the way in which fiction can bracingly impact human life. By inviting us inside her characters’ consciousnesses, she delighted, illuminated, and transformed her readers—and thereby our culture.”
—PEN America President Jennifer Egan

“I was very saddened to hear of the death of the great American novelist Toni Morrison, a giant of her times and ours. Her novel, Beloved, is a heartbreaking testimony to the ongoing ravages of slavery, and should be read by all. That her strong voice will now be missing in this age of the renewed targeting of minorities in the United States and elsewhere is a tragedy for the rest of us.”
—Writer Margaret Atwood

“Toni Morrison was one of the greatest writers and thinkers of our time, period. Her work lives on.”
—Writer, poet, playwright, and artist Jessica Hagedorn

“Toni Morrison revolutionized American letters. As a writer of fiction, she crafted language with plot with society with history in a totally original fashion to illuminate the possibilities of literary imagination. As a social critic, she crossed some of those same boundaries to liberate race and sex to show us how to read the structures of meaning within which we cannot help thinking. And as a figure within American literature, she engaged the fundamental structures of discourse as both artist and mentor. Now Toni Morrison belongs to American history, a history she influenced profoundly. For all she has done and all she represents, we her a very great debt.”
—Writer and historian Nell Irvin Painter

“At a moment in U.S. history where plain and simple racism is espoused at what used to be thought of as the highest level, we desperately need to keep before us the example of Toni Morrison; forthright without being fevered, nuanced without being knotty, she continues to teach us how to be in the world.”
—Poet Paul Muldoon

“Toni Morrison was not only one of our most prominent novelists, she was also an important public intellectual who brought sanity, calmness, and wisdom to our divided world. For many, many years now, I have greatly admired her writing and the way she was able to overcome barriers—class, gender, race. I felt soothed by her words, encouraged by her passion, inspired by her vision. Although her subjects were diverse, in the end, I think she always wrote about love—its powerful presence or its painful absence. She had a big impact on all of us.”
—Writer Elif Shafak

“I read Toni Morrison’s early novels very young, probably a little too young, when I was around ten years old. I couldn’t always follow her linguistic experiments or the density of her metaphoric expressions, but at that age what mattered more even than her writing was the fact of her. Her books lined our living room shelves and appeared in multiple copies, as if my mother was trying to reassure herself that Morrison was here to stay. . . .” Read the full tribute here »
—Writer Zadie Smith

“Toni Morrison is being justly mourned for her role in opening up the literary canon, paving the way for other African-American writers. But her contribution extends not only to the African-American community, and not only to shaping the way non-African-American people perceived African-Americans, but also a means of stretching what literature can be. Her prose, by turns tender, erotic, and violent, broadened what literature can do, and enriched all fiction-writing. We can say what was previously unsaid, and achieve tragic intimacies and moments of joy for which there had never before been words. She was a great, great woman, one I felt privileged to know, and losing her, we lose one of the great voices of our time.”
—Writer and former PEN America President Andrew Solomon

In an intimate tribute to Toni Morrison at the 2019 LitFest Gala in Los Angeles, acclaimed actor and author LeVar Burton honored the late writer’s legacy. He celebrated her narratives illuminating the lives of people in the margins of society and acknowledged Morrison’s impact on his own life. Read the full tribute here »