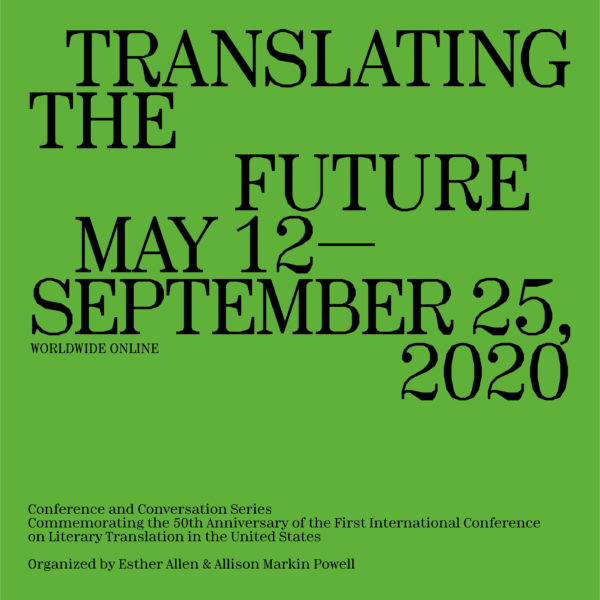 Translating the Future launched with weekly hour-long online conversations with renowned translators throughout the late spring and summer and will culminate in late September with several large-scale programs, including a symposium among Olga Tokarczuk’s translators into languages including English, Japanese, Hindi, and more.

The conference, co-sponsored by PEN America, the Center for the Humanities at The Graduate Center CUNY, and the Cullman Center for Scholars and Writers at the New York Public Library, with additional support from the Martin E. Segal Theatre Center, commemorates and carries forward PEN’s 1970 World of Translation conference, convened by Charles Bracelen Flood and Robert Payne, and featuring Gregory Rabassa, Muriel Rukeyser, Irving Howe, Isaac Bashevis Singer, and many others. It billed itself as “the first international literary translation conference in the United States” and had a major impact on U.S. literary culture.

For upcoming events please visit the Center for the Humanities website, here. 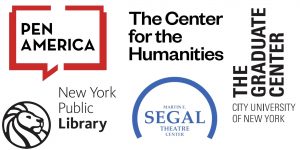 The conversations are hosted by Esther Allen and Allison Markin Powell.

For most people on the planet, translation is a key part of everyday life. During the global pandemic crisis, it has become more crucial than ever, both for the information it can convey, and for the comfort a voice speaking one’s own language can bring. How does translation heal or cause trauma, and confront or abet authoritarianism? Kaza and Mounzer weighed in from Beirut and Brooklyn to ponder whether translation is a colonial practice or a decolonizing one. Can literary translation advance and defend human rights? Should it?

The translation of poetry is a form of globalization. World literature, which is often considered within the paradigm of cultural and economic exchange, might be seen as an ecosystem. What perils does this literary ecosystem face in the present moment, and what is its role in confronting the perils faced by individuals, communities, and the planet’s own ecosystem? Speaking from direct experience of the fires that ravaged California last year and the several disasters—natural and political—that have rocked Puerto Rico, Gander and Salas Rivera considered how poetry confronts such crises.

Featured Lawrence Schimel in conversation with Daniel Hahn. Moderated by Lyn Miller-Lachmann. Presented with the support of World Poetry Books.

Translators of children’s literature—always read by both adults and children—face various unique challenges, including the potential for bi- or multilingualism, the incorporation of illustrations, and differing cultural taboos or views of what is and isn’t appropriate for children. Many classics of children’s literature (The Little Prince, Pippi Longstockings, the Grimm & Andersen fairy tales, etc.) are read in translation, even if they’re not treated the way adult books in translation would be. Are translators of works for children “translating for the future” by helping them to develop empathy and learn about other cultures in our globally connected world, or are they simply sharing universal stories full of delight and emotion that hopefully create lifelong readers?

Week 5: A Manifesto For Our Time

Read the “Call for Action” from the 2020 Manifesto on Translation, and hear from the translators who have been working to update the manifesto drafted for the original 1970 conference, “The World of Translation”—read the 1970 manifesto—as they discuss questions such as: How do we recognize the progress that has been made over the past 50 years? What are our priorities in 2020? What is our vision for literary translation in the future?

Ogawa and Tiang discussed translation as part of a playwriting practice, how they use language and translation in their own multilingual work, and how each aspect informs and affects the others in the writing, performance, and directing of their plays.

Central to the monolingual paradigm is the cherished notion of the “mother tongue”: the single, home language instilled from birth. “This particular vision does not want to admit. . . the ability to live multiple belongings,” writes Yasemin Yildiz in her landmark 2012 Beyond the Mother Tongue. Angles, who translates from Japanese and has also won high honors in Japan for his poetry written in Japanese, and de la Torre, a poet who has written in and translated from both Spanish and English, discussed the joys and perils of their personal linguistic multiplicity.

What strategies might inform our practice of translating queer literature, and what are the ethical implications of doing so? How might we draw on our own experiences of U.S. queer cultures in our work, and how might doing so reinforce American queer cultural hegemony? What structures might we as queer translators and writers want to build together in the future? Listen to the conversation, as we seek to move beyond issues of representation to discuss projects and processes related to queer literature in translation.

Week 9: 21st-Century Translation: What Has the Future Brought Us?

As technology has permeated every aspect of our lives, how has it affected literary translation? Hear from three of the most engaged industry professionals about the ways in which they have used data and technology to raise awareness and to determine what and who gets translated, as well as the promises and dangers that it represents for the future. 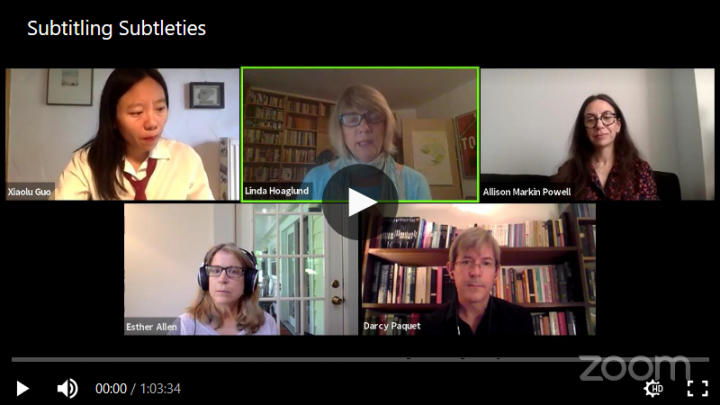 Click here to watch a recording of the video.

The global success of Bong Joon Ho’s Oscar-winning Parasite confirmed a dramatic shift in what stories movie audiences across the world, and those in the United States, are willing to embrace as “universal.” Subtitlers, particularly those who make subtitles in the lingua franca that is English, play a crucial role in rendering films intelligible for such global reception. Parasite’s subtitler Darcy Paquet assessed this intricate art with Linda Hoaglund, a bilingual film director and producer and the subtitler of 250 Japanese films, including Miyazaki’s Spirited Away and Kurosawa’s Seven Samurai, and award-winning writer-director Xiaolu Guo (She, a Chinese, UFO in Her Eyes) responded from a filmmaker’s perspective.

Translating the Future continued its dismantling of the monolingual paradigm, inspired by Yasemin Yildiz’s landmark 2012 Beyond the Mother Tongue and the work of Bruna Dantas Lobato. This event featured Cameroonian novelist Eric Tsimi, who writes in French and English and speaks a host of other languages; Boris Dralyuk, translator from the Russian and executive editor of the Los Angeles Review of Books; and poet, translator, and memoirist Rajiv Mohabir. 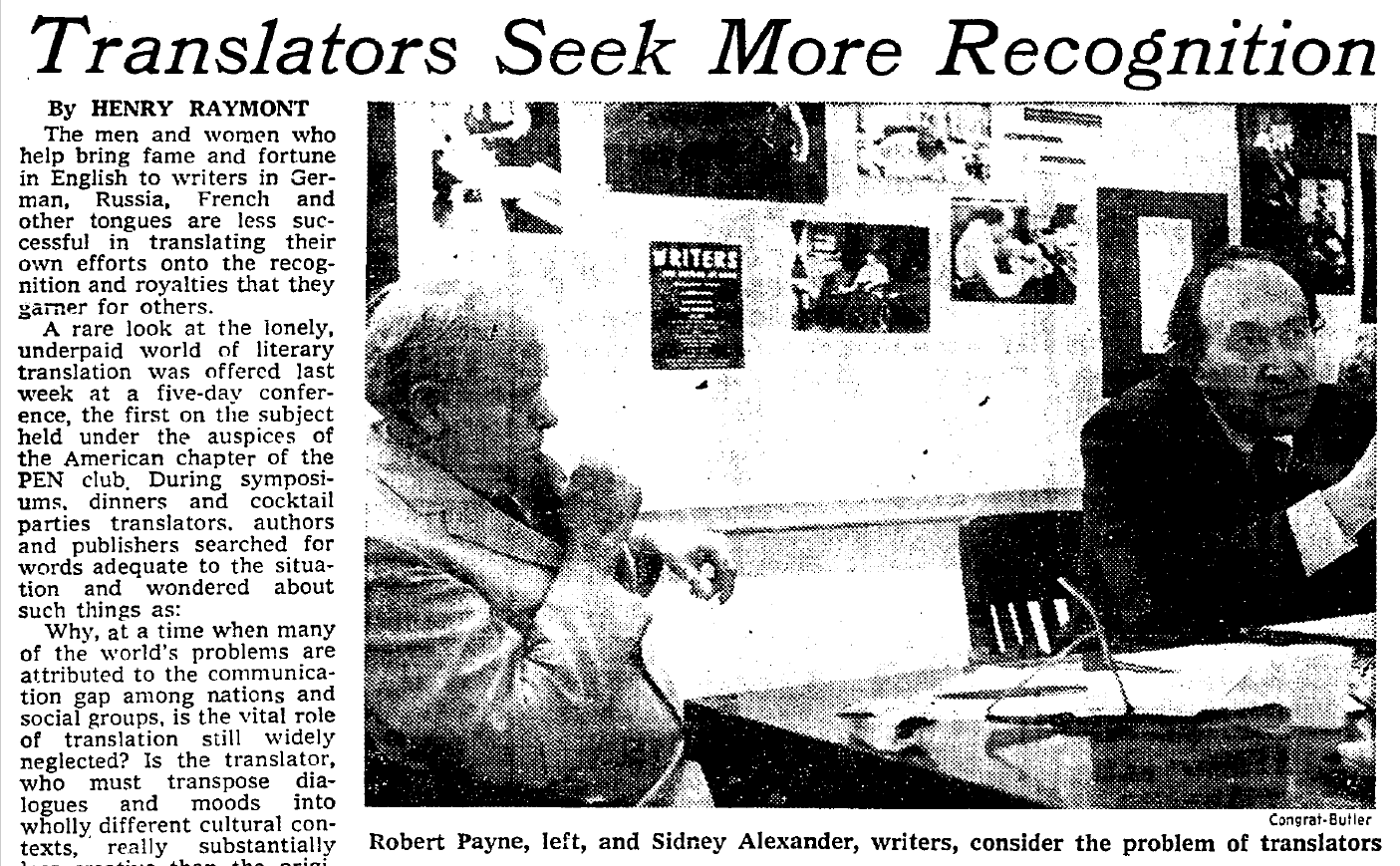 Read this article about the 1970 World in Translation conference, “Translators Seek More Recognition,” published in The New York Times. 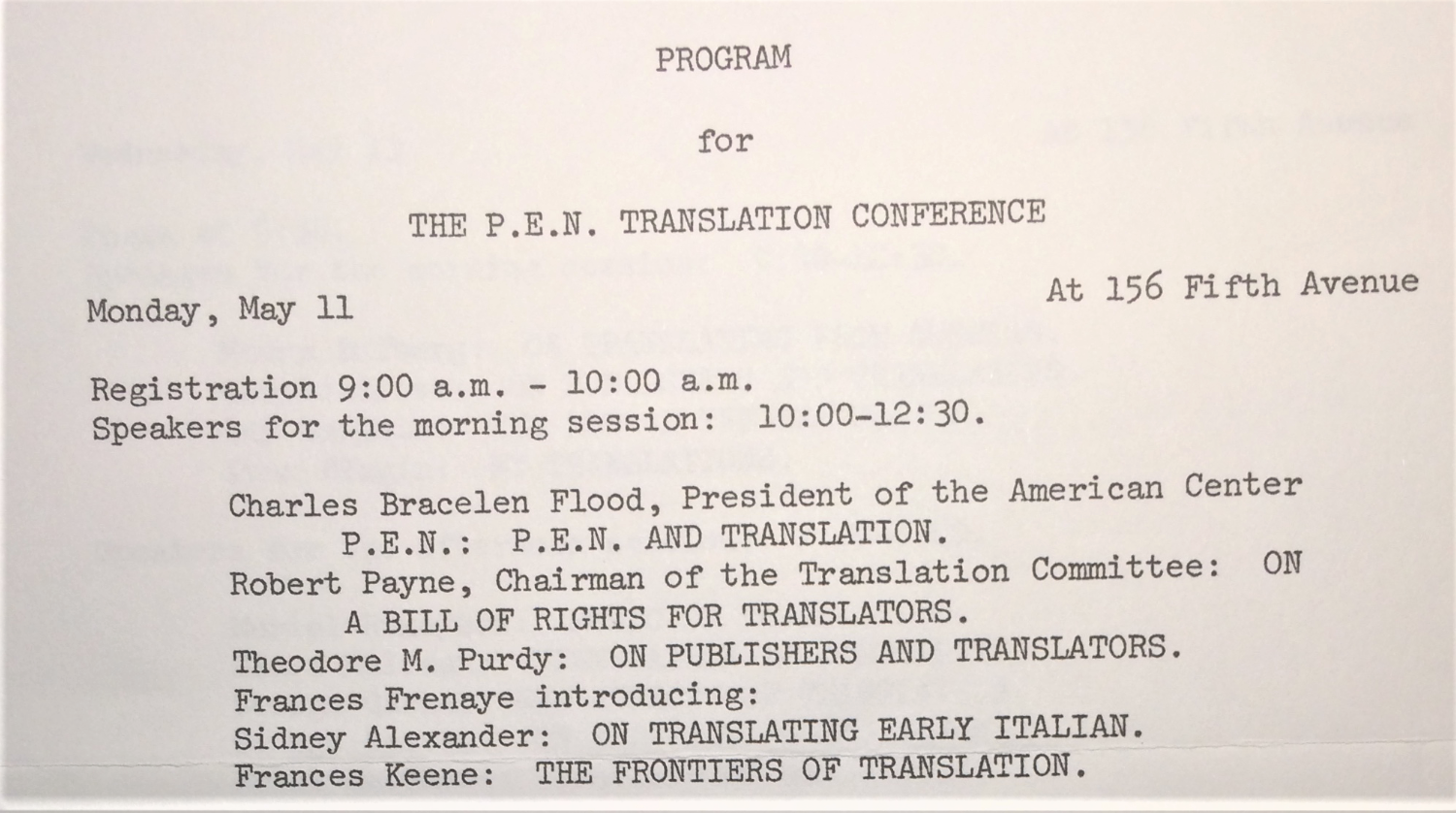 Read the original conference program and table of contents.