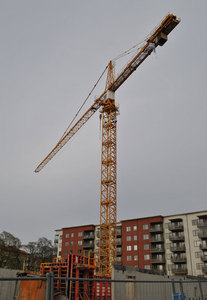 This piece was submitted by Elizabeth Streb as part of the 2015 PEN World Voices Online Anthology. Streb, a MacArthur “Genius,” has been called the Evel Knievel of dance. Her “pop action” choreography intertwines the disciplines of dance, athletics, boxing, rodeo, the circus, and Hollywood stunt work to produce a bristling, muscle-and-motion vocabulary that combines daring with strict precision in pursuit of public acts of “pure movement.” In this piece, Streb sketches her vision for a live-action piece inspired by the tower cranes that are ubiquitous in the urban landscape. The performance, Cities of the World, will be performed at the LIFT Festival, in London, in June 2016. A work in progress, the project highlights London’s iconic industrial landscape and currently centers around King’s Cross and Gas Holder No. 8.

Tower cranes are the arteries—the bloodlines—of an urban site. Tower cranes exist everywhere—in every city, on almost every block, throughout the world. It is not a building, or one river, or a bridge connecting areas of a city, that can designate sameness. It’s not the highest or the lowest. It’s not the dirt, the bricks, the glass, the air, or lights that are its materiality. The ubiquitous presence in every city, in every town, is the tower crane. It is like a praying mantis, or a dinosaur, returning to haunt the streets, the airspace—creating new heights, new arenas of occupation yet to be.

These wild, huge, ungainly things move; they dance; they glide above and across what is already there . . . laughing at the smallest below them, the already there-ness of the past. These structures, with their tasks not yet complete, have the utmost advantage of mystifying everyone’s imagination and dreams . . . the future is tingling, is taunting, us; it is pretending to know what will be there, existing, once they, the cranes, are gone.

Approach: A journey that begins in an unseen, invisible territory underground, calibrates midair, and transcends to a place high above the cityscape.

At first glance, there’s no movement, no people. Then the earth begins to jiggle and erupt—maybe it happens suddenly, from still ground to a fully erect body floating about two feet above the ground.

Ordinarily the underground arena is a place imbued with a sense of loss and doom; regarded as a point of no return; characterized by darkness; defined by an airless constriction of life. My current struggle is to fight against both the hegemony of the ground and the inherent sense of the irretrievable—the hopeless place of afterlife, the buried body—so that below the surface of the earth becomes as magical as above the surface of the earth. There is a difference between the substance of the earth and the substance of the air . . . both hold danger and can imply a lack of self-control. How many bodies would have to explode out of the ground for a sense of glee to overtake onlookers? So, for now, the piece begins with ten to twenty bodies erupting suddenly out of the ground, and the earth sprays dirt as the bodies float about two feet above the ground, in a high arch, with faces facing up and arms in a low “Y.”

I propose to outline the city with what is not yet there, the matter of the build: CRANES, the mere traces of the elegance of what allowed each brick to be laid down on top of the one that came before. There couldn’t be just one building or other edifice—it would have to be at least SEVEN! It could not matter enough; there is not a chance that a building—a single building—could be what is required to mimic itself in the representation of the “every” city. It would have to be the haunt of the actual “access to build”; the essence of what makes the build possible; what makes something so huge, so substantial, so alarming, as to have the capacity to manifest structure.

The encounter would be a familiar sight at first, an almost easy-to-ignore kind of image, except that what would be choreographed there would disrupt the citizens who pass by daily. There would be something off, something not normal occurring. There would be humans scurrying around in every possible crevice and surface and airspace. They would be occupying places that everyone knows you just can’t get to. They emblematize the possible, the future, the promise of the next, and once they—the cranes—vacate a building site, nothing major can be amended. They are, philosophically, the purest form of the aspirations of the urban hope for a better tomorrow.

With Cities of the World, my goal is to challenge the convention of the what, how, where, when, and who of movement presentation, reinventing ways to create action that is framed by aspects of the everyday world and void of the static interpretations of a theatrical setting. Action, as I encounter it, has the power to break down boundaries of all kinds—socioeconomic, cultural, geographic, political—while asking questions that challenge the very definition of form: What is dance? What is visual art? What is performance? What is it that the human body in space can provoke?