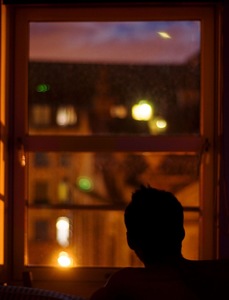 Advice to the Players

There is something missing in our definition, vision, of a human
being: the need to make.

We are creatures who need to make.

Because existence is willy-nilly thrust into our hands, our fate is to
make something— if nothing else, the shape cut by the arc of our
lives.

My parents saw corrosively the arc of their lives.

Making is the mirror in which we see ourselves.

But being is making: not only large things, a family, a book, a busi-
ness: but the shape we give this afternoon, a conversation between
two friends, a meal.

Without clarity about what we make, and the choices that under-
lie it, the need to make is a curse, a misfortune.

The culture in which we live honors specific kinds of making (shap-
ing or mis-shaping a business, a family) but does not understand
how central making itself is as manifestation and mirror of the self,
fundamental as eating or sleeping.

In the images with which our culture incessantly teaches us, the
cessation of labor is the beginning of pleasure; the goal of work is
to cease working, an endless paradise of unending diversion.

In the United States at the end of the twentieth century, the great-
est luxury is to live a life in which the work that one does to earn a
living, and what one has the appetite to make, coincide—by a kind
of grace are the same, one.

Without clarity, a curse, a misfortune.

My intuition about what is of course unprovable comes, I’m sure,
from observing, absorbing as a child the lives of my parents: the
dilemmas, contradictions, chaos as they lived out their own often
unacknowledged, barely examined desires to make.

They saw corrosively the shape cut by the arc of their lives.

My parents never made something commensurate to their will to
make, which I take to be, in varying degrees, the general human
condition—as it is my own.

Making is the mirror in which we see ourselves.

Without clarity, a curse, a misfortune.

Horrible the fate of the advice-giver in our culture: to repeat one-
self in a thousand contexts until death, or irrelevance.

At first I felt shame because I had entered
through the door marked Your Death.

Not a valuable word written
unsteeped in your death.

You are the ruin whose arm encircles the young woman
at the posthumous bar, before your death.

The grass is still hungry
above you, fed by your death.

Kill whatever killed your father, your life
turning to me again said before your death.

Phenomenology of the Prick

You say, Let’s get naked. It’s 1962; the world
is changing, or has changed, or is about to change;
we want to get naked. Seven or eight old friends

want to see certain bodies that for years we’ve
guessed at, imagined. For me, not
certain bodies: one. Yours. You know that.

We get naked. The room
is dark; shadows against the windows’
light night sky; then you approach your wife. You light

only once. A year earlier, through the high partition between cafeteria
booths, invisible I hear you say you can get Frank’s
car keys tonight. Frank, you laugh, will do anything I want.

You seemed satisfied. This night, as they say,
completed something. After five years of my
obsession with you, without seeming to will it you

managed to let me see it hard. Were you
giving me a gift. Did you want fixed in my brain
what I will not ever possess. Were you giving me

a gift that cannot be possessed. You make sure
I see how hard
your wife makes it. You light a cigarette.