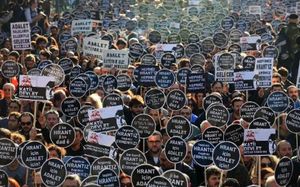 We start with bad news from Mexico, where opposition is growing to a new gag law prohibiting journalists from taking pictures and recording video oraudio at Sinaloa crime scenes. The law, which comes into force on October 15, will force reporters to rely on government releases, severely restricting the flow of free information on crime in a region that is home to Mexico’s most powerful drugs cartel.

Nearly half of the people on the U.S. government’s database of terrorist suspects are not connected to any known terrorist group, according to classified government documents leaked to the Intercept. Nearly 40 percent of the 680,000 people caught up in the government’s Terrorist Screening Database are described by the government as having “no recognized terrorist group affiliation.” The no-fly list has ballooned to a record 47,000 people. The Intercept reports that watch-list guidelines don’t require officials to have “concrete facts” or “irrefutable evidence” to secretly place someone on the list—only a “reasonable suspicion.”

The Russian government further tightened internet regulations this week with a new law that requires bloggers with more than 3,000 daily readers to register with mass media regulator, Roskomnadzor, and to conform to regulations that govern larger media outlets. The assault on internet freedoms did not stop there. The bill will also allow the Kremlin to censor social media sites that publish content it does not agree with. Beginning in September 2016, social networks active in Russia will be forced to store six months of personal user data on domesticservers.

Although officially banned, Facebook is used by approximately 25 million people in Vietnam as an alternative to the government-sponsored media. Recently, at least 100 Vietnamese activists’ Facebook accounts were blocked, the chief suspect rumored to be an “online army” of “opinion shapers,” the existence of which was recently confirmed by the government.

More on Facebook. This week an Austrian privacy advocate opened a class action lawsuit at the Commercial Court of Vienna against the media giant for what he claims is its breach of EU laws by monitoring users’ on and offline activities. The suit also alleges that Facebook acted illegally in cooperating with the NSA/GCHQ’s PRISM data mining program. Up to 25,000 Facebook users are expected to sign on to the class action suit, which seeks 500 euros in damages for each complainant (claimant).

Istanbul-based Bianet reports that physical assaults against journalists in Turkey have increased over the last three months with 54 journalists assaulted between April and June. Thenon-profit reports that 23 journalists were imprisoned as of July 1, 14 of them Kurds. Tuesday’s blocking of an anti-government Twitter account with close to a million followers underlines the threat to digital freedoms in Turkey – the subject of an upcoming PEN report. Meanwhile, Norwegian PEN is finalizing a second qualitative report on wider free expression issues in Turkey. That report will be featured here upon publication.

In only the second meeting of its kind, President Thein Sein met with the Myanmar the Interim Press Council to calm fears of increasing threats to press freedoms. In a positive move, he said that he would find “ways to solve ethical problems of journalists through the press council instead of legal action.” He also warned that the press had a responsibility to be “respectable.” PEN remains deeply concerned about the recent deterioration of free expression in Myanmar.

Chinese search engine Baidu hopes to win “the struggle for ideological penetration” as it enters the Brazilian market, replicating the same disturbing methods of digital censorship it uses to maintain the ‘Great Firewall.’ This as China moves to impose controls on the country’s most popular chat service and to keeps journalists out of restive areas in western Xinjiang where the simmering grievances of ethnic Uyghur people have led to repeated violent incidents in recent weeks.

The Land of Potato Chips

Lastly, in a blow to the global potato chip industry, MIT researchers have found that by analyzing video recordings of a “potato chip bag” it is possible to capture conversations taking place nearby. How do they do it? By looking at the nuanced vibrations reflected in the bag caused buy the sound waves. Lesson learned: Eat with your mouth shut.