This Book is Not a Car 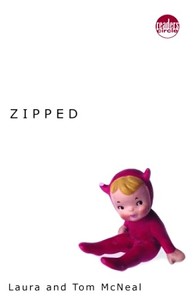 When my husband and I started writing young adult novels 20 years ago, I never expected our biggest obstacle to be the Nervous Parent. I think that’s because I grew up in a devout Mormon household where my parents were nervous about what I did or didn’t do, but not at all nervous about what I read. The idea that I could do anything and be anyone started with Heidi, which my mother and I read lying side by side on the floor, reading alternating chapters aloud. Of course, Heidi doesn’t make anyone nervous. But by the time I was 11 or so, I was reading Judy Blume and every other young adult book that existed in 1978, followed by and interspersed with Ernest Hemingway and Go Ask Alice and A Separate Peace and Rich Man, Poor Man and Gone with the Wind and Tess of the d’Urbervilles and Catch 22 and Exodus and Mr. and Mrs. Bo Jo Jones.

The one thing all of these novels have in common is they’re about people making mistakes. Novels are about transgression and regret. That’s how we get the catharsis we need from art—characters do what we fear we might do, and they suffer the consequences. In the simplest possible terms, it’s the character in a horror movie going into the haunted house alone. You’re thinking, “No! Don’t go in!” But the character has to go in on your behalf, has to go in and confront the terrible thing. We scream, and we feel better afterwards.

I believe that’s why there’s so much power to be found in novels with sad instead of happy endings, a thing that people are forever complaining about when they talk about young adult fiction. Yes, in a sad book, the reader may be compelled to scream, internally, “No! Don’t go in there!” and “No, don’t die!” But if the character doesn’t do the thing we’re afraid we—or worse, our children—might do, how do we find out—safely—what will happen? If nobody ever suffers or dies, how can the writer be telling the truth? And how do we get the catharsis we need, the purging of strong emotions like fear and hate and love and desire, without fiction that tells the truth?

A young adult novel is always a coming-of-age novel, although coming-of-age novels are not always for young adults, which is why the genre came into being. If you want to know the difference, it’s usually the things the writer is allowed to be explicit about, the age of the narrator, and the degree of hopelessness the writer is allowed to express. Serious fiction published specifically for young adults is supposed to be edifying. That’s why lots of young adults, once they get to a certain age, stop reading it. They see it as too childish, too heavily influenced by parents who want to protect them from adult behavior. Kids who stop reading Young Adult books don’t want to be edified; they want either mindless fun or they want the truth. They want what those who dismiss the young adult genre call “real” books.

That’s the conundrum I face when I sit at my desk trying to write psychological realism about kids with family problems and romantic entanglements and moral quandaries. I now know that instead of being completely hands-off, the way my parents were, parents are hands-on. If my mother had read all of Judy Blume’s and Thomas Hardy’s and Irwin Shaw’s books before she saw me reading them on the sofa, she might have said, “No, Laura, you don’t need to know about that.” Instead, she went to work, cooked our meals, and answered whatever questions I dared to ask her (usually the ones that I didn’t even know were about sex). She let me read what I found in the house and the bookstore and the library, and discover what I discovered, which is that some books are full of lies, and some books are full of truth. Some books give you hope and make you feel tremendous, purifying compassion, and some books are garbage that make you sick to your stomach. In all of that inhabiting of good and bad books, I got drunk, I got pregnant too young, I fought in World War I, I died in childbirth, I married the wrong man, I pushed my best friend out of tree because I was jealous of him, I became a drug addict, I wore a scoliosis brace, I hid in the Lodz ghetto, I wore a Scarlet A on my chest, I killed the man who raped me and destroyed my marriage to Angel Clare and—here’s the redemptive part—I saw what was good and bad in human behavior and I learned to feel empathy. I vowed to be careful and try to be good. I grew up without actually having to do any of the scary things myself. This was the most important gift my parents gave me. The freedom to live other lives—any other lives in any country or time period—in books, as long as I came home to dinner, slept in my own bed, never sassed my mom, and did my homework.

But now I’m often asked if our books are appropriate for a child of such and such an age. I’m told, by parents who hear that our second book, Zipped, is narrated by a 15-year-old boy who discovers that his stepmother is cheating on his father, that they don’t want their kids to read any books about divorce. “Why?” I want to say. “Because they don’t know anybody whose parents are divorced?”

In this state of mind, I started writing Dark Water six years ago. I wanted to write a love story about a girl who meets an illegal migrant worker like the ones I had seen every day for 15 years on the street corners of our town. I wanted to put them in a riverbed during a wildfire like the one that burned for six days near our house in southern California in 2007. I knew that my teenaged narrator was going to have to make a mistake, or there would be no novel. I knew that when she broke rules and did dangerous things for emotional reasons, a lot of mothers were going to be mad at her. They were going to ask, as one mother did, “Is it appropriate for a 15-year-old girl to have as her first priority a 17-year-old boy?”

For me, this isn’t really the question. Maybe the question is, “Could it happen?” Maybe it’s, “Will this book make you more careful with others?” Or, “Is the book both beautiful and true?” But if you’re paying attention to your child in other ways and teaching moral behavior by example, you don’t have to ask this question at all. A book isn’t a speeding car driven by a drunk person. It’s a slow motion film of an accident from which you—and your child—will always walk away.