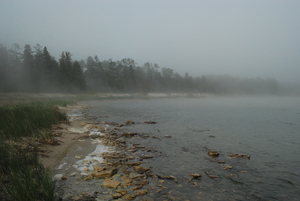 Rivera-Garza will be participating in six events at next week’s PEN World Voices Festival: Reckoning Mexico on April 26, Mexico’s Latin Amercian Leadership on April 27, Women of Mexico and Translating Activism: Ayotzinapa and Beyond on April 28,  KJCC Poetry Series on April 29, and La Frontera: A Literary Salon on April 30.

That it had been a long time since I investigated anything was not a lie. Failures weigh people down. Writing reports of all of the cases I was unable to solve, however, had helped me to tell stories, or at least, as people say, put them down on paper. Whether I was obeying or taming language is not important. I hadn’t taken an official job anywhere but, instead, had begun to lead the discreet life of a writer of noir novellas.  Sometimes failures push us to open the doors of a timeworn house and to clean the dust off the unused furniture and find a drawer where an old typewriter hides. Failures force us to reflect, and reflection, with any luck, may lead us to a coastal city and a pile of blank pages. Failures drink coffee in the morning and keenly observe the afternoon light, and, when possible, go to sleep early.

I busied myself putting a small house in order that I had abandoned years ago and dedicated my time to writing about the cases I had worked on, but I wrote them differently. It wasn’t that I solved in my imagination what I was unable to solve in reality. It wasn’t that my woebegone figure transformed, thanks to the grace of fiction, into a glamorous heroine or an ill bred villain. This different way consisted of rigorously telling a series of events, while not disregarding insanity or doubt. This form of writing wasn’t about telling things how they were or how they could be, or could have been, instead it was about how they still vibrate, right now, in the imagination.

When I finished my first manuscript I sent it out to a small but prestigious press that published novels of a similar style. I added a brief letter of presentation, and without imagining what would happen, I stuffed all the sheets of paper into an envelope and sent it off.

That the painter of the forests had told anyone that I was a detective seemed strange to me, to say the least. Everyone knew that I had left this phase of my life behind. Though no one, that I was aware of, knew about the agreement I had made with the editor of the small press who had gotten in touch to offer me a publishing contract. In fact, it was this editor who had also helped me devise a plan to protect my identity: I would use a pseudonym and in order to avoid the perverse curiosity that sometimes accompanies those who are too reticent, he would hire a woman approximately my age, with a somewhat similar appearance, who could answer questions in interviews and readings. Meanwhile, I could continue to live in the old house by the coast, telling stories to an ancient typewriter, thinking. The agreement seemed acceptable.

If I hadn’t liked the man, if he hadn’t taken me by the elbow in order to cross the gallery and arrive, somewhat out of breath, somewhat astonished, on the terrace, I certainly wouldn’t have accepted a case that was so dull and hopeless—the kind of case that is one of so many.

“Bring her back” is what he asked of me. Only that. “Go to the Taiga and find her and when you do, please, bring her back.”

V: EVERYONE TAKES THE SAME TIME TO FALL

That I would study the documents very carefully, I told him many times. I would read everything, I said, and when I said this I must have lowered my eyes. Modesty is an unyielding stone somewhere deep in the chest. That I would open a new folder and aptly name it “The Taiga Syndrome” in order to record, in different fonts, doubts, discoveries, loose threads. Hunches. Yes, I would find her, find them.

I remember the sound of the blades as the helicopter circled the house while I flipped through the loose sheets of paper. I remember how I raised my face to try and look through the ceiling. And why doesn’t he go? I remember asking. What is it really that he is afraid to face?

It took me three days to form a rough idea of what the Taiga actually was. Its temperatures, its flora, its fauna. Its shades of green. The names of its provinces and then the names of its cities and towns and backwaters. Its language and languages. Its rivers. Sometimes it is good to remember that we all live, after all, on one planet.

The telegrams and letters helped me to reconstruct their route. Postal stamps. Their ink sometimes smeared by the rain and snow; others, crisp and clear across space, across time. The man was right: the woman seemed determined to be found. Like Hansel or Gretel, or both, she had sprinkled the crumbs of words and telegrams in every telegraph or post office everywhere they went. As they progressed, the cities shrank and the transportation became increasingly rudimentary. Airplanes, trains, ferries, barges, rowboats, kayaks. She gave the impression of being unable to stop. As if she were falling, it was the same with the messages, as if they were falling.  What she seemed to need, truth be told, was, like in rugby, for someone or something to tackle her.

I remember the physics lesson that came to my mind when I started to read the telegrams: without taking into account the presence of air, all things take the same time to fall. How they had explained the force of gravity. How any object could experience the accelerated speed of an astronomical object. Weight. Attraction. A certain velocity. Everyone takes the same time to fall. I remember that I searched for a quote by Einstein where he likened gravity to fiction: “Said force is an illusion, an effect of the geometry of space-time. The Earth deforms space-time to its own environment, in such a way that space itself pushes us towards the ground.”

No one can really know why someone leaves their home, not even, or above all, the one that leaves. But why would anyone pursue someone who flees to the Taiga? The answers, in my case, were numerous: for money, of course. For an Adam’s apple that threatened to break the leathery skin of a man’s neck? For that as well. In order to have the opportunity to ask a woman, directly, while grabbing her by the right arm in a struggle that was nearly pointless and even less decent, why, what for? For that, that’s why. Also. In order to see her eyes, terrified. In order to sink into those eyes, an insect of the boreal forest. Something that stings or bites. A tiny warrior. When inside, to buzz. The question or complaint, to pierce: tell me why. Tell me where this passion comes from. What’s it made of.  How or what.