The Steady Running of the Hour 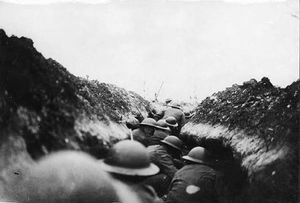 This piece was submitted by Justin Go as part of the 2014 PEN World Voices Online Anthology.

Justin Go’s events: A Literary Safari and Literature of the Great War

There are a thousand kinds of weapons here and Ashley has seen them all. When they are in a museum one day, he thinks, they will know how we went back to the Middle Ages. But Ashley had seen medieval weapons in the Tower of London and even the poorest had been finer and cleaner tools than some in this war.

Ashley lifts a whisky bottle from the dugout’s crude shelf, no more than a plank hammered into the clay wall. He studies the bottle’s label. Strathisla, a good single malt. He wonders where it has come from and why it is not yet empty. He pulls the cork out, letting the aroma drift up the bottle’s neck. Peat and oak, a faint scent of honey. Ashley recorks the bottle and puts it back on the shelf.

The dugout is lit by a single candle set in an empty wine bottle on the table. Beside the table are a pair of upturned crates serving as stools. A few pictures have been tacked to the dugout walls, photographs of actresses torn from the illustrated papers. Ashley rinses his mouth with his canteen and takes his pistol from its leather holster, the oily black barrel still warm to the touch. He sets the pistol on the table, but he does not reload it.

Fully clothed, Ashley lies down on one of the makeshift bunks, two nets of chicken wire hung on a wooden frame. A muddy blanket lies beneath him. The bunk is short and his boots are propped upon the bed frame at the far end. He pulls an overcoat across his body and tries to sleep.

As a boy he had loved the Tower and best of all he had loved the weapons. He remembers when he was barely tall enough to see the hilts of the swords arrayed in long rows along the stone walls of the armory. He remembers the elegant Toledo rapiers, the massive German Zweihänders, the gilded French maces, the flails, the war hammers, the morning stars.

Then there was this war. The German patrols had favored knives from the beginning; the British had thought this crude, until they turned to cruder weapons of their own. On a night raid a knife was a clean and silent instrument. To have your throat slit was not the worst death.

The British favor clubs and there are dozens of kinds. There are coshes, wooden sticks loaded with a lead core; there are truncheons and blackjacks tied to leather lanyards. One could attach anything to a handle to give it heft: an emptied hand grenade, an enormous cog. The regimental carpenters fashioned such weapons, or wooden maces studded with iron nails, a weapon a farmer might have carried into the field in 1525. Centuries ago they had turned to maces because plate armor had become too hard to pierce.

And we have turned to maces, Ashley thinks, because we fight like vermin in a gutter.

There are brass knuckles, and knives with brass knuckles set into the handle, and knives with brass knuckles studded with spikes. Ashley has seen faces gored with such weapons and the result was very bad. There are also spades, trench shovels sharpened to a fine edge, and the Germans favor these. Ashley had seen one of his men cleaved by such a spade. He was a delicate private from Newbury, sixteen and covered in freckles and grime; he had lied about his age to the recruiting sergeant, but once the platoon had reached France he bragged openly about being born in the new century, claiming the round number was good fortune. The private was so innocent that the ceaseless swearing of his platoon had scandalized him and he had even complained to Ashley. A few weeks later a huge German cleaved the boy with a sharpened spade, the blade coming down on his shoulder and splitting his torso nearly to the belly button. The private had lived on for nearly an hour, blubbering on about nothing. One of the older men held his hand and waited for him for die.

For one raid the battalion had grafted meat cleavers onto the ends of broomsticks. Ashley had been astonished to see the men marching these weapons down the trench, the shafts perched smartly on their shoulders. They might as well have requisitioned arms from the Tower.

There are a thousand ways to die, Ashley knows, and some are better than others. To be honorably wounded is the best a brave man can hope for. Not even fools believe they will survive unscathed. To lose a limb is a small thing weighed against surviving the war.

There is artillery fire and there are dozens of kinds. There are shells and mortars and canisters with shrapnel balls that lodge into supple flesh. You can get shrapnel in the face, the groin, anywhere, or your legs or arms blown off, or all at once. You can have your guts shredded, your arms cradling steaming intestines as they writhe out into the mud.

There are the machine gun and the rifle, but one doesn’t flinch at the sound of these, because they are felt before they are heard. This makes some men less anxious, but when Ashley is being shot at his whole body sings with terrible sensitivity, waiting for the searing lead slug. As deaths go, many hope for a bullet in the head, and when mothers or sisters or lovers write to you to ask how their man died, you tell them he died this way. They might believe you because they wish to.

There is the searing gas that blisters skin and turns eyes into vacant clouded orbs, all the while scouring your lungs into bleeding mush. You might take weeks to perish, mutely suffocating in bed.

There are the elemental ways to die—burying, drowning, burning.

A dugout can collapse under shelling and bury you alive, or drown you as it slowly fills with water. The two sometimes come in tandem, so that it is hard to tell which will prevail. Burning happens many ways, but the most feared is from a flamethrower. All the soldiers know how bad it is because the victims scream horribly and look worse afterward. The smell of burning skin and fat is sickening. Flamethrower operators are always killed with relish, even those who surrender.

There is the sucking mud that takes waders and guns and horses and love letters, and flailing men you leave behind under retreat, knowing they will never be dug out.

Cruelest of all are human hands and the weapons they wield. Hands that drive bayonets into seizing heart or flooding lungs; hands that smash your skull or slit your throat from ear to ear, hack muscle or crack bone as best they can. Before he reached France, Ashley had often traced the course of flesh, from loving conception to mother’s swaddling arms, fed and bathed and kissed; instructed by teachers, treated by doctors, and caressed by lovers, until the day that men who had no cause to hate you tore you sinew from bloody sinew. It was absurd from any perspective. But since the Somme he thought no more of this.

On balance Ashley wishes to be shot in the head, the most prosaic of deaths. He fears a stomach wound most, or anything that takes hours of agony, stranded in some godforsaken shellhole. If he has to get a wound like that, he hopes to bleed and die fast enough, or be able and willing to use his revolver. But he is not sure he could do that, no matter his wounds, and it troubles him. Ashley worries about moaning in front of the men, for he has seen the toughest of officers whine like children. Terrifically wounded soldiers of any rank are a danger, for if they cry out within earshot of the trenches, brave men might go out for them and get themselves killed. The best thing is to quickly bleed to death, or if you can, to bite down on something and wait for nightfall.

From the novel The Steady Running of the Hour (2014). Reprinted by permissions of Simon & Schuster, Inc., NY.