The Seizure of a Book Review 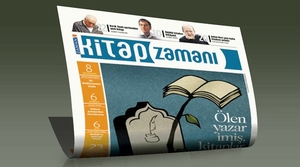 On March 4, 2016, Kitap Zamanı, the popular monthly literary supplement of Turkey’s largest newspaper Zaman, was shut down by the Turkish government. Poet and columnist Can Bahadır Yüce reflects on the magazine’s 10-year history and the future of press freedom in Turkey.

The first days of March are supposed to be the harbinger of a bright spring, but March 4 was a dark, shameful day for democracy and press freedom. Turkey’s largest newspaper, Zaman, was seized by the government and turned into a pro-Erdoğan propaganda machine in a matter of hours. Police stormed into Zaman’s headquarters in Istanbul, using tear gas and water cannons against its journalists and against the 500 supporters who had gathered to protest the government’s takeover. International coverage of the seizure was extensive. Concerns over press freedom were expressed, and the silencing of Turkey’s most influential non-governmental media outlet was widely condemned. However, another silencing that day went unreported: Turkey’s most-read literary supplement Kitap Zamanı (Book Time), Zaman’s monthly book review magazine, was shut down completely.

A novelist and a contributor sent me this message: “I wish we had not been born as writers in this country!”

I’ve been editing Kitap Zamanı for 10 years. On the day of the police raid, we had just finished preparing the latest issue of the magazine. The cover story was about the centenary of the great Turkish poet Behçet Necatigil. Our aim was to celebrate Necatigil’s life and work with previously unpublished pieces by the poet himself, a letter from his daughter (who is also an acclaimed author) and commentary from distinguished scholars. During the tumultuous hours of the government takeover, we managed to put the finishing touches on the issue and submit it to the printing office. But Zaman’s new, state-appointed trustees halted the publication. The reason? None given, not known. I was reminded of Necatigil’s famous poem: Much incomplete still / of not being written. “Incompleteness” is the dominant theme of Necatigil’s poetry, and suddenly it seemed very relevant—the autocratic state did not allow us to complete our tribute to one of the greatest poets of the Turkish language.

The story of Kitap Zamanı began in 2006. The first issue appeared in February of that year, with a question on its cover: “Dear reader, where are you?” The response from readers was immense. There had been a couple of book review magazines in Turkey before Kitap Zamanı, but there had been a need for a fully rounded literary supplement. Kitap Zamanı quickly built up its following; before long thousands of readers relied on it to see beyond the bestseller lists.

I shy away from calling what we have done in Kitap Zamanı “criticism,” being aware of Henry James’s distinction between “the practice of reviewing” and “the art of criticism.” Yet, I believe, Kitap Zamanı published some of the finest pieces of literary journalism to be found in the Turkish media.

Unforgettable memories come to mind, such as our visit to J. D. Salinger’s home in Cornish, New Hampshire, in the early summer of 2009. After a day-long search we found the reclusive writer’s home, but, respecting his privacy, we did not knock on the door. Instead we left a note on behalf of Kitap Zamanı in the mailbox. Salinger died six months later. When I heard this sad news, I was editing another issue of Kitap Zamanı.

But I will sit at my desk every day. I will write. I will resist.

Kitap Zamanı is all these memories, both for us and our readers. Now we have to find our own way to keep these memories alive, because the government has not only halted the magazine’s publication but has also erased its 10-year archive. After this outrageous damage, a reader wrote to me, “I feel as if I’ve lost a beloved family member.” Why would a government delete an interview with José Saramago from the archives? Or an essay by Julian Barnes? A story by Etgar Keret? Why on earth would they censor our conversation with Terry Eagleton?

Just a few weeks ago, we celebrated Kitap Zamanı’s 10th anniversary with a special issue featuring contributions by writers such as Geoff Dyer, Javier Marías, John Banville, Joyce Carol Oates, Per Petterson, and Tim Parks. Michael Dirda, book critic for the Washington Post, wrote a piece for the issue. In it, he said, “I’ve read a fair amount of Byzantine history, and hope, one day, to visit Istanbul and other parts of Turkey. When that happens, I trust that Kitap Zamanı will still be flourishing.” These words made me so happy a few weeks ago. Today they break my heart.

In the history of the Turkish press, one can find many stories of censorship and state pressure. Yet, Kitap Zamanı is the first literary supplement to be seized by the government. (Not surprisingly, the same government has shut down 321 public libraries in the past decade.) As in the dystopian novels, the future looks dark for Turkey. After the violent takeover of Zaman, a novelist and a contributor to Kitap Zamanı sent me this message: “I wish we had not been born as writers in this country!” I understand her anger and desperation. Still, I am not without hope. As Samuel Johnson puts it, the natural flights of the human mind are from hope to hope. I believe that, some day, democracy will rule in my country.

The authoritarian Turkish state seized Kitap Zamanı and halted my column at Zaman. But I will sit at my desk every day. I will write. I will resist, bearing in mind the lines of the great Turkish poet Nâzım Hikmet: Our most beautiful days / we haven’t seen yet.

Published in partnership with English PEN.

Can Bahadır Yüce, born in 1981, is a poet and columnist for Zaman newspaper. He edited Zaman’s literary supplement, Kitap Zamanı, for ten years. Yüce studied at the University of Virginia, and currently pursues his doctoral studies at Indiana University Bloomington. He has published three poetry collections.