The Secret Game: A Wartime Story of Courage, Change, and Basketball’s Lost Triumph 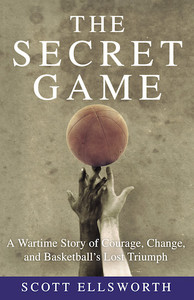 Scott Ellsworth is the winner of the 2016 PEN/ESPN Award for Literary Sports Writing for The Secret Game: A Wartime Story of Courage, Change, and Basketball’s Lost Triumph. Thie book tells the story of the first integrated college basketball game in the South: an all-black team from North Carolina College for Negroes versus an all-white team from Duke University. Set against the backdrop of a segregated sports culture, this book explores the role of basketball in twentieth-century society, and the challenges facing players of color. The following is an excerpt from the book.

Something was happening to basketball. For half a century, the game had quietly edged its way toward the top level of American sport—familiar and widely played but with little true fanfare of its own. Television had not yet arrived in the nation’s living rooms, and radio broadcasts of basketball games were as rare as slam dunks and turnaround jump shots. In Franklin D. Roosevelt’s America, basketball coaches and players weren’t household names, the NBA hadn’t yet been organized, and nobody spent half a paycheck on a pair of sneakers. If you wanted to see a college basketball game, you just showed up. There were always plenty of seats.

The truth was, aside from a few hoops-mad hot spots like Indiana and Kentucky, or New York City and Lawrence, Kansas, basketball was an entertaining but short-term winter visitor, one that helped fill the sports pages of the nation’s newspapers between the end of the college football season and the heart of baseball’s spring training. During the lean years of the Great Depression and the turbulent days of World War II, few Americans gave the game much thought.

But along the edges of the basketball world, in musty field houses and on gravel-topped school yards, change was in the air. A handful of maverick coaches and self-possessed players had been pushing hard against the old, dull game—the human chess matches in which scoring was rare, shooting was strictly two-handed, and belts and knee pads were standard game-day apparel. Aided by rule changes and the arrival of better equipment, these coaches and players had moved beyond the boundaries of what was considered acceptable, ruffling feathers and upsetting traditions. Tinkerers and inventors, they were reaching for something different, a kind of basketball that hadn’t happened yet.

Among them was a soft-spoken man with chestnut-brown eyes, a displaced Kansan whose prairie twang and enigmatic ways often caused Southern brows to furrow and heads to tilt. Not much older than most of his players, John McLendon had not played a lick of college basketball himself, and the small school where he coached was unknown to most North Carolinians, much less to the rest of the country. But he also possessed an unmatched basketball pedigree: at the University of Kansas, where he had been one of only a handful of colored undergraduates, McLendon had also been the last student of James Naismith, basketball’s inventor.

Nor was that all. For in less than a half dozen years, McLendon had transformed the Eagles of the North Carolina College for Negroes into the nation’s highest-scoring college basketball team, a juggernaut of speed and finesse that left opponents demolished, referees exhausted, and fans in awe. On the outermost fringe of collegiate athletics, the twenty-eight-year-old coach had crafted an approach to basketball that was, he believed, years ahead of its time.

But to know for certain, he would have to cross another kind of boundary.

He would also need some help.

And so, on one Sunday morning during the spring of 1944, John McLendon and a handful of college basketball players suddenly found themselves in a locked gym on the south side of Durham, North Carolina, going deep into uncharted territory. More than three years before Jackie Robinson first pulled on a Brooklyn Dodgers uniform, and a full decade before the Brown decision and the Montgomery bus boycott, they had a chance to do something that the South wouldn’t see for years and an opportunity to give the country a new vision of sport. On a long-forgotten Sunday during the middle of the nation’s bloodiest war, they uncovered what the future could look like—would look like—for a different kind of country.

The young men who accomplished this are largely forgotten. Most were natural athletes, accomplished competitors on the ball courts of their hometowns, while others had honed their skills through hours of practice and years of pickup games. Some were well off, others dirt poor. And, like their fellow Americans, they came from all over.

Read other excerpts from the 2016 PEN Literary Award winners here.