The Power of Voice: On Translating Aurora Venturini 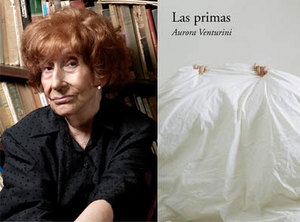 Roy Kesey is the recipient of a 2015 PEN/Heim Translation Fund Grant for his translation of The Cousins, by Aurora Venturini. Read an excerpt of the translation here.

For as long as I can remember, the literary element that has most fascinated me is that of voice. As Barry Hannah put it in his Contributor’s Note for The Best American Short Stories in 1994:

(Y)ou will have only junk if you don’t find the voice—inevitable, urgent, necessary, without false pride or hectoring. (…) Of all qualities, voice is the most unteachable, and the closest to magic.

Each psyche mapped carefully into language feels as distinctive as a fingerprint, and it’s precisely this quality that first attracted me to Aurora Venturini’s novel Las primas (The Cousins). The story of how I came across the book is fairly standard stuff—an international book fair, an editorial director who knows my tastes all too well. The story of how Aurora Venturini came to be “discovered” in Spanish, on the other hand—at the age of 85, following decades of writing and translating in exile, by winning a contest explicitly designed to find the next hot young thing in Argentine letters—is nothing short of extraordinary.

As is the book itself. In the words of Jorge Consiglio, writing for La Nación, “(Venturini’s) prose is omnivorous, using a wide range of registers and tones to modulate the temperatures of her scenes.” She is as at home in Latinate phrasing as in truck-stop vulgarities; her insults and neologisms are ingenious. These resources, combined with a syntax that alternates between galloping rhythms and sudden silences, have enabled her to create a poetics that is entirely unique.

The Cousins is in some ways rather dark. There is a murder and a disfigurement; there are miscarriages and untimely family deaths. One of the miracles of the book, then, is how funny it is in many places, and how becalmed throughout. Both of those elements owe everything to Venturini’s signature achievement: the voice of Yuna, the narrator and main character. Rich with dark humor and irony, her observations on family, suburban life, sexuality, and social climbing are candid, at times brutally so.

The rhythms, syntactical tics, vocabulary, and internal logic of Yuna’s voice together bear her history, and are the key to her future. They allow us as readers to bear witness to her will not just to survive the world’s perverted ways, but to thrive in spite of them. Signally, however, her voice is heard only by the reader, or nearly so: she has decided that the secret to hiding what she perceives to be her own mental disability is to speak as little as possible to most of the people around her. The language that would “normally” (norms, normality, and normalization being hotly contested terms in the book’s subtexts) flow outward is instead vested in the notebook she fills with writing: the text we are reading.

Venturini’s career has exploded since The Cousins first appeared in 2008, with four books subsequently published to widespread critical acclaim. Each of her narrators has a voice that is as inevitable and urgent and necessary as that of any living human being, and I can’t wait for the English-speaking world to discover her as well.

Publishers and editors who wish to express interest in any of these projects are invited to contact PEN Literary Awards Coordinator Arielle Anema (arielle@pen.org) or Translation Fund Advisory Board Chair Michael F. Moore (michaelfmoore@gmail.com) for the translators’ contact information.

Roy Kesey‘s latest books are the short story collection Any Deadly Thing (Dzanc Books 2013) and the novel Pacazo (Dzanc Books 2011/Jonathan Cape 2012). He is the winner of an NEA grant for fiction and a PEN/Heim grant for translation. His short stories, essays, translations, and poems have appeared in about a hundred magazines and anthologies, including Best American Short Stories and New Sudden Fiction.

Aurora Venturini was born in 1922 in La Plata, Argentina. In 1948, Jorge Luis Borges awarded her the Premio Iniciación for El Solitario. Following the Revolución Libertadora, she spent 25 years in exile in Paris; the French government awarded her an Iron Cross for her translations of Villon and Rimbaud. Her novel Las primas won the Premio Nueva Novela in 2008 and the Premio Otras Voces, Otros Ámbitos in 2009. Since then she has published five more books, each to wider critical acclaim than the last.